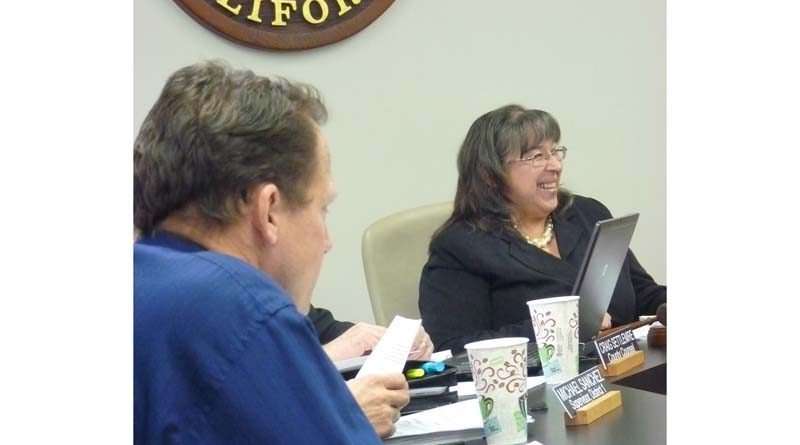 Lori Simpson (right) sitting at the Chairman position Jan. 3 during her first day as chair of the Plumas County Board of Supervisors and her third term as supervisor for District 4. Supervisor Kevin Goss is seated in the foreground. Photo by Steve Wathen
News
January 25, 2017January 18, 2017 Steve Wathen, Staff Writer

Lori Simpson was recently sworn in for her third term as county supervisor for District 4 and was chosen as chairman by the rest of the board on Jan 3.

Simpson grew up in Quincy and did several service-sector jobs before starting to work for the county and eventually becoming a county supervisor.

This is her story about growing up in East Quincy and how she slowly evolved into becoming a county supervisor.

Growing up in Quincy

Simpson moved to East Quincy from Banning in 1965 when she was 8 years old. Since it was so different here, she said, “I told everyone I was moving north to the Yukon, but that it was beautiful.”

When she moved here with her father, Larry; mother, Estelle; two sisters, Lisa and Lynda; and brother, Larry, she said, “All the mills were running and the schools had lots of money.”

It was a Huckleberry Finn type of childhood, when children, boys and girls alike, had the freedom to run around wherever they wished.

“It was an idyllic childhood experience. We were up in the woods all the time, riding horses, building forts, visiting ponds, catching pollywogs and taking them home to watch them grow.”

Simpson went to Pioneer Elementary. She liked games and was good at spelling and reading, but said, “I was shy. Our whole family was shy.”

“I wanted to travel the world and see things.” She noted, in retrospect, “I never got a chance to do that.” She was not complaining. Simpson said, “I got to do a lot of other things.”

“Feather River College,” says Simpson, “was one of the best things that happened to Quincy.”

Simpson finished her high school requirements early and started taking classes at FRC, before that was a common thing to do.

While taking classes, she worked at the college library checking out books. She also babysat for professors.

Up to this point, and for many years more thereafter, like a lot of people, Simpson hadn’t decided what she wanted to do with her life.

At FRC, Simpson majored in liberal arts. At the same time she was doing whatever jobs she could find in a small town: washing dishes at restaurants, cooking for students at public schools, being a janitor, being a teacher’s aid.

One of the highlights for Simpson during this period of her life was getting to work for the California Conservation Corp at Plumas National Forest.

Simpson said, “We marked timber for salvage sales, from stands impacted by insects. We fixed up campgrounds.”

In 1981, at the age of 23, Simpson moved to Orland with her husband, Marvin. Again, she found work at hospitals and schools.

In 1987, Simpson, her husband and her daughter, Carina, moved back to Quincy. Simpson worked at a convalescent home. She also went back to school at FRC and majored in childhood development. She got also earned her certification as a preschool teacher.

Simpson’s mother was a role model in this area. “Mom was always good with kids and took kids in for babysitting,” noted Simpson.

Simpson also loved kids and tried to get a job with Head Start, a federal program to help students get ready for elementary school, but she wasn’t chosen.

Simpson would have liked to have been a teacher, but never got that opportunity either.

In 1991, Simpson got a job that started to move her towards her current position as county supervisor. She got a part-time job at the Quincy Library doing data entry, shelving books, etc.

In 1992, the library received a state grant to teach literacy and Simpson was able to start teaching and helping people.

Simpson began by teaching English as a second language to two women in Quincy. She also handed out books and held “Story Time” sessions in Portola to encourage parents to read to their children. Simpson said, “It felt good to help others.”

Simpson ended up working for the library for 13 years until she got a job as an assistant director at the Plumas County Museum. A lot of her job in the museum was helping people who came into the museum looking for historical information.

“A lot of people were doing genealogies. Agencies needed to know about the presence of historic sites in their project areas.” Simpson showed them how to get information out of archives.

Simpson pointed out, “People don’t realize how important the museum is, with all the history and everything it has.”

Simpson has discovered that several factors led her towards becoming a county supervisor, although she wasn’t aware of it at the time.

“If you had told me when I was younger that I would be county supervisor someday, I wouldn’t have believed you. I still can’t believe it.”

“However,” she added, “I have spent all my life in public service, trying to help the people.”

Simpson also points to her grandfather, Wesley Leiber, as one of the initial influences on her political life. Simpson said that after dinner, the men in the family would go off and talk about politics away from the women.

Simpson was interested in current events, so she would listen to her grandfather and the men talk about politics.

Leiber was a groundskeeper most of his life and was a strong supporter of the working class and a dyed-in-the-wool Democrat.

Her grandfather grew up as one of eight kids on a farm in Missouri. He later found a job in a munitions factory and then started doing landscaping.

Her grandfather later followed his son, Simpson’s father, and his grandchildren north to East Quincy and got a job as a landscaper for the Plumas Sierra County Fairgrounds, a job he performed for three or four years.

Simpson’s father worked in public service. He was a police officer in southern California. On vacation with his family to the Quincy area, he saw an advertisement for deputy sheriff. He was hired as a deputy sheriff by Plumas County, moved his family north, and served in that capacity for 20 years.

Of course, Simpson’s mother was also an influence on her. Her mother served the community by helping children, something that Simpson still has a passion for.

Finally, Simpson served as a union representative while working for the county and so began interacting with county administration.

Simpson called herself a “Rabble-Rouser.” For instance, county department heads were each given a fitness budget so they could stay in shape. They were given memberships to the gym. Some of them started to use the money to buy golf clubs. The average worker got nothing.

Simpson also became a board member for a few small county boards that needed members and she stayed with them “through thick or thin.” Ironically, one of these was serving on the board of the local Head Start program.

People started to notice her activism and how she got things done. So in 2008, people started asking her to run for county supervisor.

Simpson didn’t think she had a chance of winning but it sounded like it would be a good experience. So she said, “Sure, I’ll run. … I never dreamed I’d win.”

However, she did win.

Looking back on this choice now, Simpson said, “It feels like I was heading towards becoming a county supervisor all along, even though I didn’t know it. Like it was fate.”

“I’m a people person. I like working with people and helping people.”

Simpson found she liked being a county supervisor. Being able to put political ideology aside, working with the other supervisors and getting things done “for the people.”

Then it was 2012, nearing the end of her first term. She had to run again if she wanted to stay on as county supervisor.

However, this time it was different. There was more at stake. It wasn’t any longer just because she thought it would be a “good experience.” She wanted to stay on.

Simpson had two opponents who also wanted to represent her district, both high school classmates.

Though her opponents were, as she describes them, “absolute gentlemen,” Simpson found that running the second time was different than the first time: “It was nerve-racking being an incumbent and not knowing if you are going to win.”

Looking back on it now, however, Simpson said, “Having opponents was a good thing. It makes you show how you have met people’s needs. Everyone should have an opponent, it steps up your game.”

Ironically, when Simpson ran for a third term in 2016, she didn’t have an opponent. “It was really shocking, because I had always had an opponent.”

Almost all the jobs Simpson has done in her life have been to serve the public; from washing dishes, to putting books back on library shelves, to helping people to learn to speak English, to standing up for workers, to being a county supervisor. Those roles have been what she calls “public service.”

Simpson wants people to know that “public service is an “honorable thing to do. I wish other people would step up to plate and volunteer for boards, etc. Do something good for the community.”

This last point was Simpson’s incentive for doing this interview.

What does Lori Simpson like and dislike about being a county supervisor?

“You can’t please everyone. I want to make everyone happy and you can’t.”

“Being a public person is a two-edged sword: I love talking with people and hearing about what is going on in their lives. However, I can never go out into the public and not expect to be on display.”

“Dealing with state and federal bureaucracy.”

“It’s exhilarating when you can get something done for the people in a good way, with everybody working together.”

“Working on the local level is the best. It’s on a real level, working directly with people and their problems. It’s not an isolating process.”

“Wow, being part of the history of Plumas County.”

“Being a role model for other women and other people who are outside the system; for them to see that someone like me was able to get elected.”

One thought on “The People’s ‘Rabble-Rouser’”