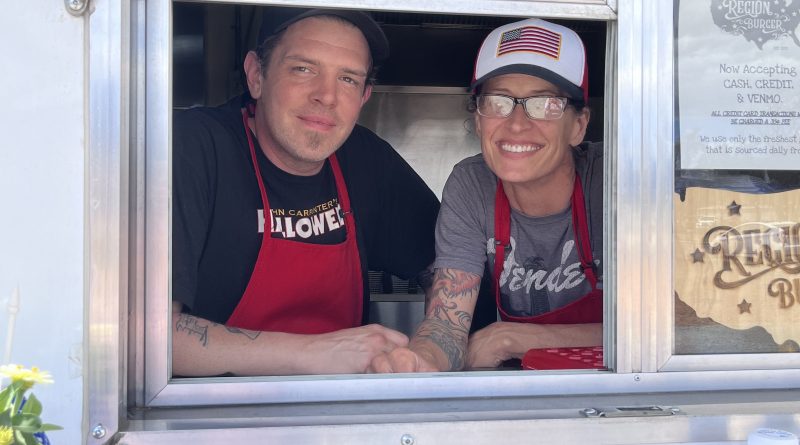 Before the Dixie Fire took Greenville you either ate pizza at Mountain Valley Pizza, got a sandwich from the deli counter at Evergreen Market or the Papenhausen’s food trailer, or hoped Mary’s German Grill — a food truck that opened in the spring of 2021 hadn’t run out of whatever German delicacy Mary Shero was making that day. Those were the only food options left.

But there was culinary hope on the horizon: the building where long-standing and recently closed Anna’s Café had been, was set to open with new owners and a new business: Region Burger. Long closed Sierra Sunrise was about to become The Valley Grind. Then last August came, and the Dixie Fire seemed to burn not only both those buildings but the hope of places to eat in downtown for the foreseeable future.

Thankfully, the downtown Greenville food desert in the wake of the Dixie Fire has instead become a food truck and trailer oasis in the town’s recovery efforts.

Through grants, help, tenacity, hard work and imagination the downtown corridor of Crescent Highway and Pine Street is slowly becoming a food hub, bringing with it arguably more food options than Greenville had before the fire.

There’s a bright cheery yellow trailer sitting on the corner lot where Sierra Sunrise once stood. In front of it is a picnic table, some potted flowers. A cheery spot along the highway where The Valley Grind owner Rachael Goings serves up espresso drinks and non-coffee drinks along with a daily lunch special.

“It was our dream to have this place,” said Goings, undeterred by the obstacles of opening in downtown. For the proprietors of the downtown food trucks it took months to get up and running again as water, electricity, and Internet had not been reliable since the fire. The Valley Grind is open weekdays from 7 a.m. to 2 p.m.

Nearby the new coffeehouse trailer is Wanda Carpenter’s Hawt Dog stand—selling hot dogs with all the fixings for lunch downtown. Carpenter, a retiree, wanted to give herself something to do in retirement and to provide something needed for the community. She’s open Monday through Thursdays from 12 noon to 2 p.m.

“We love it here and this is where we want to do business,” said Christi Hazelton, “We feel a lot of love flowing from the community. As long as people keep coming we will be here.” Region Burger spent the bulk of the year catering events like Dixie Fire Collaborative monthly meetings, along with Mary Shero’s Mary’s German Grill. The catering events have helped sustain the food truck owners while waiting the go ahead from the county to open downtown. Region Burger is open Tuesdays through Saturdays from 11:30 a.m. to 7 p.m.

There are the makings of more to come in downtown Greenville. The German Grill will probably be the next food trailer open downtown—Shero was awaiting some repairs on her food trailer which remarkably survived the Dixie Fire though lots on either side of her had burned in her previous location downtown.

Crush-a-Bowl is awaiting county approval and it will open soon at the opposite corner of Pine Street at Main Street toward North Valley Road. There’s even a saloon opening soon —affectionately being called “The Way Baby” — while the adult size historic Way Station building is rebuilt on Main Street.

To hear Kest Porter of the Indian Valley Rotary speak at various Dixie Fire Collaborative and Rotary meetings, the invitation is open for more businesses to come back to downtown Greenville. Both the DFC and Rotary have recognized that the only way for Greenville to really come back is to have new businesses thriving. It has to be more than a bedroom community of a few houses that didn’t burn to thrive.

And in the space of one year, recovery does not look bad. Greenville has two gas stations, two stores, and the food trailers along Pine Street. Riley’s Beef Jerky is closer to completing its bigger and better compound along highway 89 as you drive into town from Quincy or the canyon. It’s an exciting time to be here for anyone participating in recovery.  The food trailers are serving both the community and the workers in from various agencies and companies setting up for the rebuild. There are many workers to feed. Out of the ashes new businesses rise.