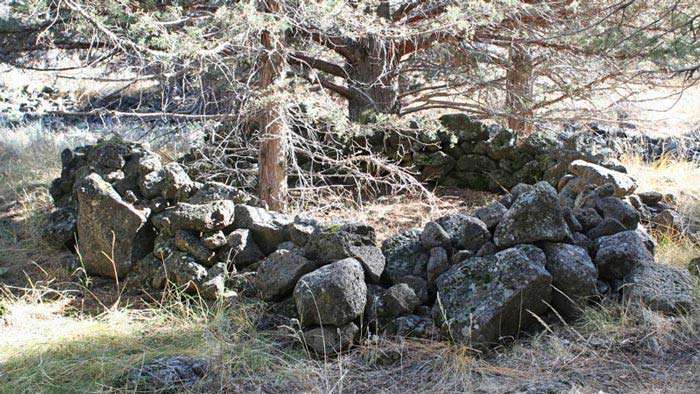 The Aparuge had a primary village along the banks of Pine Creek near Eagle Lake in Lassen County where they built an ingenious series of fish traps consisting of hundreds of stacked lava stones constructed in a circle with a small opening in one end. Photo by Stacy Fisher
News
July 30, 2018July 26, 2018 Stacy Fisher, Staff Writer

Pine Creek near Eagle Lake was home to the Aparuge, one of several separate bands that make up the group known as the Ahjumawi, pronounced “ah-choo-MA-wee,” or Pit River Indians, the original people of Northeastern California.

The name Ahjumawi means “where the waters come together” in the Ahjumawi language, or in some translations, simply “River People.”

Archeological evidence suggests the various tribal bands occupied parts of Shasta, Siskiyou, Modoc and Lassen counties from between 3,000 and 5,000 years ago, with many of their descendants still residing in those areas today.

Long before settlers established their presence in the region, the Aparuge had a primary village along the banks of the stream where they developed efficient tools and techniques for the impoundment of trout and other species of fish, building an ingenious series of fish traps consisting of hundreds of stacked lava stones constructed in a circle with a small opening in one end.

Pine Creek was intensively used for fishing when water temperatures and flows were adequate to allow for upstream migration to spawn, particularly in the early spring when Eagle Lake trout, or Naht’ tâye in Aparuge, migrated from the lake and into Pine Creek, the main tributary to Eagle Lake, allowing capture inside the fish traps.

One Aparuge man in the early 1930s said, “When the trout are running, you can wade into the water and catch with just your hands all the fish a man will want.”

Senior State Archaeologist John W. Foster, now retired, writing online for California State Parks, said that the Ahjumawi subsistence practices “involved not just the harvest of a fishery resource, but managing a fishery,” and was of paramount importance to the native Pit River Indians.

He went on to explain that a central opening along the outer perimeter of the trap was just large enough to allow fish to enter, and then could be closed with a keystone or a log to trap them inside.

“The leader might strike the first fish,” Foster wrote, “then other men would carefully wade in and spear them, tossing selected specimens up on the bank. … Women might also join in, scooping out fish with their hands or using spears or basket scoops and load the catch into baskets,” located on the banks of the stream.

It was not unusual for an expedition to take 100 fish or more from a given stone-built trap, he continued, with individual specimens weighing between 4 to 7 pounds each.

Foster said that when an adequate supply was taken, the trap was reopened and fish were allowed to resume their spawn.

According to information provided by the U.S. Forest Service posted on a kiosk at the Pine Creek site, the Aparuge were known to collect hundreds of pounds of fish for immediate feasting and to dry for winter consumption.

After the trout run ended, the native people took advantage of other fish species like minnows, suckers and tui-chub. They also gathered the eggs of the great numbers of waterfowl and harvested their feathers.

Another primary food source was epos, an abundant root that is found around the open valley bordering the stream, available from mid-April until the snow fell, eaten fresh and uncooked, or pounded into meal and stored for the winter.

Additionally, elderberry, manzanita and sage had a variety of uses, such as food, medicine and material for clothing.

During the last century, the natural flow patterns of Pine Creek had been affected by the construction of railroad grades and roadbeds, along with unrestricted cattle grazing, resulting in profound changes on fish habitat in the Pine Creek watershed.

To amend past alterations to the stream in order to see Eagle Lake trout spawn and establish a large enough population once again, it has been necessary to correct past impacts to the stream.

In 1987, concerned individuals and agencies formed what is now called the Pine Creek Coordinated Resources Management Planning Group (CRMP) to improve hydrologic conditions in Pine Creek. Because of their efforts on restoring natural flows, many problems related to fish passage and habitat have been resolved or improved.

For instance, fencing was constructed to distribute livestock along designated routes, along with reduction of sediment loading into Eagle Lake from Pine Creek, improvements to stream bank stability and modification of culverts to provide for easier fish migration into the creek, including Eagle Lake rainbow trout.

Other organizations and agencies joining in the restoration efforts over the years include the California Department of Fish and Wildlife, USFS and Susanville Indian Rancheria.

According to the California Department of Parks and Recreation, California State Parks is working with native Ahjumawi residents to preserve the unique stone fish traps and to more fully understand their use.

Visitors to these sites must avoid disturbing the traps. They are still used for traditional fishing.

More information on the Pit River Indians can be found at Pitrivertribe.org.