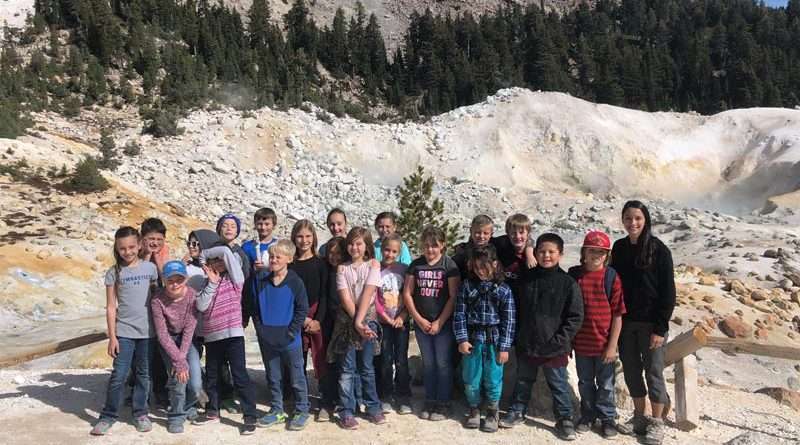 Plumas Charter School students from the Greenville Learning Center learned about the incredible natural wonders in their own backyard during a trip to Lassen Volcanic National Park last month.

McIntyre said the Oct. 15 field trip was the culmination of class studies on landforms, particularly the Sierra Nevada and Cascade ranges, tectonic plates, and the fault lines that create the volcanic Ring of Fire.

“Students learned about the characteristics of active, dormant, and extinct volcanoes,” she said. “We investigated what makes a volcano ‘active,’ which led to exploring the hydrothermal features of Lassen Volcanic National Park. LVNP is an amazing resource that is almost right in our backyard.”

Students learned how Bumpass Hell got its name from a local character whose leg was so badly scalded while exploring the area in 1865 that it had to be amputated.

History, science and English language arts intersected with an unusual assignment: “We wrote an imaginary letter to Kendall Vanhook Bumpass before our trip thanking him for his amazing discovery and explaining the science behind his unfortunate accident that resulted in the loss of his leg,” said McIntyre.

Students also received a hands-on lesson about how elevation affects plant and wildlife habitat, and they got to see high-elevation species such as marmots and pikas, said McIntyre.

Through study of the natural world, the field trip allowed students to realize the concept of global change on a personal level, said McIntyre.

“They saw evidence of glacial strides, where there were once huge glaciers, which led to the discovery that the Earth is always changing, which affects us directly.”