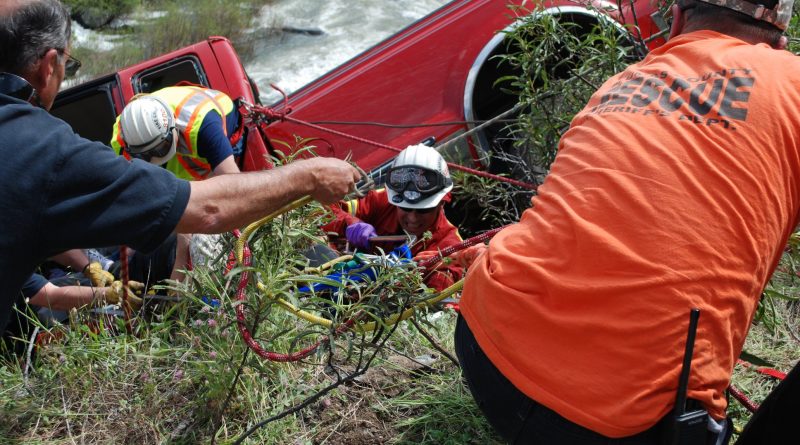 Editor’s Note: Plumas County Search and Rescue is this year’s grand marshal for the Independence Day Parade in Graeagle. They will be featured in the event which is scheduled to begin at 1 p.m. Sunday, July 3, in downtown Graeagle. Following is a story about Plumas County Search and Rescue that was originally published in our High Country Life Magazine, but we are reposting here in case you missed it. Plumas County visitors and residents are lucky to have such a dedicated group of volunteers responding to all types of emergency situations.

In a typical year, Plumas County Search and Rescue responds to 50 or 60 calls for service, but 2021 was anything but typical.

Coordinator Mike Grant lost count of the calls as he and his volunteers dealt with fire evacuations, snow rescues, missing person searches, vehicle accidents, injured individuals and more. “We happen to be one of the busiest small population counties in the state for Search and Rescue,” Grant said. Never was that more evident than last year when Grant described the fire evacuations carried out by Search and Rescue as “one long call.” The evacuations began with the Beckwourth Complex that broke out June 30 and rolled on through the Dixie Fire. “We did Greenville three times,” he said.

“That’s a lot for a volunteer group,” Grant said. The team has 16 volunteers, though the goal is to have 24. As of our interview in early May, there were seven new applicants. They will meet, do some self-study and then participate in trainings. Learning about maps and GPS is “a huge part of what we do,” Grant said. “And there’s a pretty steep learning curve.” Based on prior experience, Grant estimates that three will be on the team in a year, with one staying for the long term. As with other entities, Grant said it’s difficult to find volunteers and, in the meantime, “our demographic age is going up and up. Young people today don’t want to volunteer and if they do, it’s only for a few years.”

Part of the reason for the attrition is the toll it can take on a volunteer’s psyche — many times a search and rescue call involves a fatality. Grant recalled that back in the early ‘80s, Plumas Search and Rescue responded to 80 calls, 48 of which were fatalities. During an average year, 25 percent of the calls involve fatalities. “People say, ‘I can’t do this,’” he said. And even for Grant, a seasoned veteran of Search and Rescue, some calls are difficult.  “Bothers the hell out of me when it’s a kid,” he said.

There’s also the time commitment — training and then the actual calls. The first two weekends in May of this year, volunteers drilled on swift water rescues in the Feather River. Some thrive on being in involved in water calls, while others prefer the winter-time snow rescues. When the pages go out, volunteers have the option of responding or not.

When asked if there’s any criteria to become a Search and Rescue volunteer, Grant said, “I wish I had a bunch of 25- or 30-year-olds that can walk up a mountain, but that isn’t the reality. He said that has a number of people in their 70s who aren’t interested in scrambling down a bank and going into the water, but they can provide invaluable support to those that do.

The last year also brought what Grant referred to as “Plumas County’s perfect storm.” With every major highway through the Sierra closed around Christmas, motorists turned to their Google and Apple apps, which directed them over Gold Lake and La Porte roads. Grant recalls rescuing 48 vehicles on Gold Lake Road in one day. Grant was shocked by people’s behavior even when told the road was closed. “One day we were out on Gold Lake Road, with three of our vehicles, the CHP, the sheriff, and these people would drive up. “We would tell them the road is closed, and they would say, ‘No, my map says it’s open.’ They were absolutely irate that we wouldn’t let them go.” Grant, through the Office of Emergency Services, is working with map providers to mark the roads as closed for the winter.

Volunteers aren’t paid and Search and Rescue services are provided free of charge. However, volunteers have gold envelopes that they can pass out to those who are assisted that provide a convenient way to send in a donation. Typically, the department brings in $35,000 a year through the envelopes as well as telemarketing solicitations. Search and Rescue also relies on grants to purchase vehicles and other equipment.

But this year Search and Rescue has received a windfall of sorts through the PG&E settlement negotiated by Plumas County District Attorney David Hollister and the other counties impacted by the Dixie Fire.  As a result, $500,000 is coming to the team — how will that be used? “We have always wanted to have our own building to house everything,” Grant said. Many of the vehicles are stored at Grant’s house; others at the fairgrounds. “The current situation probably won’t be here forever,” he said. Grant said he and the other volunteers will discuss the best way to spend the money. One thing it’s not spent on is salaries; all of the volunteers are just that — they volunteer their time for no compensation.

Graham Shea, 38, of Quincy, said he became involved in the organization because he wanted to be able to help, and Grant mentioned him as an example of an excellent addition to the team. But Shea wasn’t always sure that he would be right for the work.

In an essay titled “Why You Should Consider Volunteering with a Search and Rescue Team” published originally in 2019 and then again in 2021, Shea discusses his reservations, and then the reality of what it’s meant to him. Following are some excerpts:

“A couple years ago I stumbled across an ad in the paper which said that my local search and rescue team was recruiting volunteers…While I had concerns about whether I had the skills, time and disposition to serve my community in this kind of role, I signed up anyway. After undergoing some classroom training and taking the state oath of office, I was issued a pager, a radio, and a very orange shirt, and immediately started going out on calls. Very quickly I began to see that by seeking to help others, I was sharpening myself, and that volunteering for search and rescue brings many benefits to one’s life.”

Shea discussed how the motivation to stay in shape increases because it’s “about more than just me.” “I might (and did) suddenly have to hike 12 miles down a trail in the middle of the night to respond to a hiker’s personal locator beacon, or lift the full weight of a woman on a back board as we transported her up a canyon cliff from her mangled car.”

Then there’s the benefit of firsthand survival wisdom. “While SAR has given me a sound education in what to do in the outdoors, it’s also offered a rare and priceless look at what not to do — the enemies (hypothermia, trauma from a fall, poor planning, disorientation, etc.) … Because I volunteer for SAR, I can now see a two-foot deep river as a deadly trap, and at the same time have the confidence to do things that otherwise would have felt much riskier.

Knowledge and mastery of yourself in real emergencies. Shea described what a lot of people feel: “I worried, when that fight or fire or accident came and I got a chance to be a man, I might crack or panic or regret it the rest of my life.” But as he responded to calls, he learned that “I was actually very good at keeping a level head and even thrived when things got intense.”

Inside knowledge of emergency systems. “It’s easy to theorize about how a given disaster would affect you,” Shea said, “but volunteering for SAR puts you on the inside, and even shows you weaknesses in your local systems the public doesn’t know about…You won’t only know evacuation routes and response protocol, you’ll also be well practiced at executing them.”

Following are some of the skills that he lists as being part of a mountain Search and Rescue team: CPR, wilderness first-responder, swift water rescue, off road vehicles, low/high angle rope rescue, winter camping, snow/ice climbing, ski SAR, avalanche SAR, man tracking, canine SAR and Code 3 driving. Of the latter he said, “SAR team members get certified for code 3 driving the same way law enforcement officers do — with skid pans, cones and race tracks …f lying past a highway patrol and seeing him smile and wave has been one of the highlights of my SAR involvement.

“SAR isn’t all about brawn,” Shea said. “You show up on a search scene, examine the clues, and your minds begins racing through the possibilities to connect them, knowing the answer could be a stone’s throw away… As a SAR searcher you may be the only hope for a worried or grieving family. Or you may be the front line of justice if foul play was involved. SAR volunteers get to be the good guys.”

Shea shared a litany of reasons why people don’t volunteer such as “sounds exciting, but I don’t know if I can handle the emotional strain.” Shea also had that thought, but said that every time he has been on a difficult call, he is glad that he was there to help.

Others worry about not having the necessary skills. “You don’t need any prerequisite skills at all,” he said. “Everything you need to know will come in regular training and from learning on the job.”

Then there’s the time element. “The time commitment isn’t as big as you may be thinking,” he said. “A call could come at any time, and you go when you can.” Shea said that as he responded to calls, he discovered that he couldn’t imagine “that hour or two out of my week being put to better use” … and he learned to manage his time better.

Shea sums up the experience this way: “Far and above all the other perks, volunteering for SAR ends up being an amazingly satisfying endeavor because you become part of a dedicated, selfless, and professional group of helpers who do good in local communities in the most exciting ways possible. Facing real life-and-death issues for the benefit of my community melted away all the existential angst of my easy life immediately, got me outside myself, and helped me become a better man.”