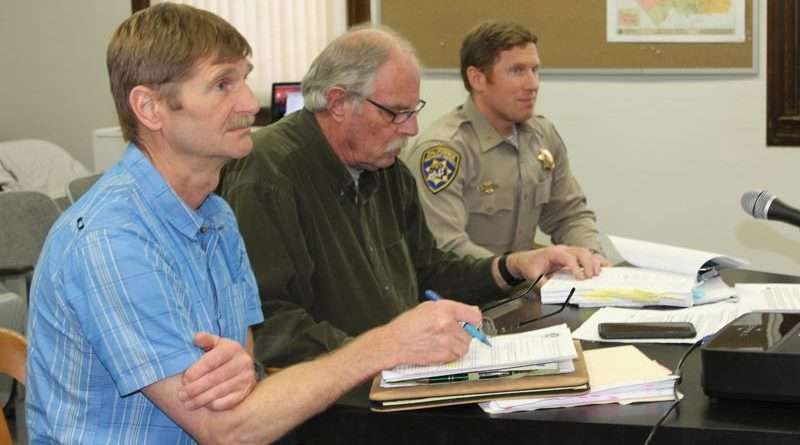 From left are Plumas County Environmental Health Director Jerry Sipe, Plumas County Planning Director Randy Wilson and Quincy Area California Highway Patrol Commander Erik Egide before the Plumas County Board of Supervisors on March 12. Wilson and Sipe were outlining their concerns with the state’s plan for a new CHP replacement facility. Egide made it clear that he is not included in planning the new facility. That work is done at the state level. Photo by Victoria Metcalf
News
March 23, 2019March 20, 2019 Victoria Metcalf, Assistant Editor

To say some department heads were caught off guard by a news story and legal advertisement concerning a new California Highway Patrol facility might be an understatement.

The state is currently requesting inspection of the plans for the replacement structure destined for approximately 5 acres in East Quincy.

Two department heads — Jerry Sipe from environmental health and Randy Wilson from the planning department — were before the board of supervisors March 12, stating their concerns over what Sipe called incomplete plans. Public Works Director Bob Perreault said he has traffic and air quality concerns.

Although Egide said he isn’t consulted concerning facility plans, he would do what he could to streamline the process.

Supervisors directed Wilson, Perreault and Sipe to get their comments together in a letter and send it to the state by March 15. The comment period advertised by the state ends Thursday, March 21.

Supervisors also requested that the state delay closing the comment period. Egide said he would immediately contact his people at the state level and make that request.

At no point did anyone object to the new facility.

Plumas County residents, supervisors and department heads were all included in a legal notice requesting comments on a new CHP replacement project designated near the intersection of Lee Road and Alta Avenue in East Quincy.

When Wilson and Sipe learned of the comment period each sought out state documents and began reading. These are not automatically sent to each department within a county where a state project is proposed. Each has some concerns about the state’s planned facility.

Wilson took the lead on addressing their concerns to supervisors.

The site is approximately 5 acres, he said. Three of those acres include the facility, maintenance parking, fueling station and public parking. “It’s pretty comprehensive,” Wilson said. “It’s going to be expensive.”

What concerns Wilson is that despite the state’s investigation into the issues for a Study/Mitigated Negative Declaration (IS/MND), their planners somehow missed that Quincy isn’t an incorporated community. He said that missing that fact was “somewhat of a disconnect” for him.

And some of the property isn’t in the fire district, Wilson added. The property would need to be annexed into the district.

And Wilson is also concerned about the aesthetics of a 6-foot high block fence designed to secure the facility. At this stage he doesn’t know what that will look like.

Sipe’s major concern is whether the state intends to connect the facility to the existing water and sewer lines or create its own septic system. Both are written into the plan, he explained. “However, the potential impacts of these individual and standalone alternatives are not adequately addressed in the IS/MND,” Sipe stated.

According to the plan by the state, they need to apply to American Valley Community Services District for annexation. The first step toward that goal is to go through LAFCo.

If that option isn’t successful then the state would move toward its own septic and water supply system. Sipe said he’s concerned that the state could decide that the AVCSD costs were too high or that it needed to cut overall costs of the plan and go to its own system.

In its plan, the state describes a below ground septic tank, its capacity and the size of two leach disposal fields. “However, further analysis, justification, and evaluation of the suitability for onsite waste disposal is missing from the IS/MND,” Sipe said.

Environmental Health has found that there are no issues with hooking up to AVCSD services. Sipe said there are no problems for the gravity flow and no barriers to a connection. There is also high groundwater in that area, which would preclude the facility having its own system and this is not included in the state’s document.

Sipe also pointed out two paragraphs where the state document says one thing in one paragraph about which system it would choose and then something different a few lines later.

In the last statement, the state planner says that if they chose to have a self-contained system onsite, “The proposed project would have no impact.”

“Futhermore, installation of a septic tank and leach disposal system as described above could have very significant impacts,” Sipe said in his report.

“To be clear, Environmental Health fully supports the alternative for community wastewater disposal through the AVCSD,” Sipe said. “

Sipe pointed out that Plumas County Code requires all occupied buildings, which applies to the CHP facility, that are within 200 feet of an approved connection to use it. Besides water and sewer, electricity is also available at that location. “These considerations and analyses are missing from IS/MND,” Sipe said.

A study for a septic system is also not included.

Environmental Health recognizes that the project site is owned by the state and local regulations “typically do not apply.”

But in one section of the state’s document on the CHP project, it recognizes Environmental Health’s role to permit septic system installation. This authority comes through the Porter-Cologne Water Quality Control Act, Basin Plan.

As with the septic system, if the state doesn’t hook up to available community services, it plans to develop its own supply, Sipe indicated.

“The impacts of a stand-alone public drinking water system are not properly identified or addressed,” Sipe said.

There are many state regulations that restrict or prohibit the development of new public water systems, Sipe indicated. The state’s own water board could order mandatory consolidation in various circumstances according to the California Health and Safety Code. “None of this is mentioned in the IS/MND,” Sipe said.

“Operation of the proposed project will be subject to at least three of the Unified Hazardous Materials Management Program elements,” according to Sipe.

Although CHP Commander Erik Egide was present at the meeting, and several supervisors made a point of saying they had invited him, he told those in the meeting that he has nothing to do with the state’s plans. Although he is aware that the Quincy Area CHP has been chosen to get a replacement facility for the outmoded facility on Main Street in Quincy, his needs and advice are not sought. Supervisor Lori Simpson said that a number of state projects have been planned in her district over the years she’s served as a supervisor. Two of these include the new jail, and a courthouse that didn’t happen. Given that she asked if there was any possibility that a public meeting be arranged with the state concerning the project proposal. “People just like to hear what’s going on,” she said. Luckily there aren’t many people or homes in that area. When either or both occur there are typically concerns.

“We’re supportive. We want this to go smoothly, but our staff has issues and they’re very valid,” Simpson said.

Supervisor Sherrie Thrall said she was concerned about the leach fields and the slope of the land. She said that would mean groundwater issues.

Quincy Fire Chief Robbie Cassou said he had concerns. He wants the new facility to access emergency water from the hydrant that is directly across the street from the site.

Planning Director Wilson said that Plumas County’s General Plan and zoning ordinance apply to everything, but state projects. The existing project plan includes a 40-foot high water tank toward the rear of the property. But Cassou still wants the facility to use the available hydrant, not stored water at the rear of the property in an emergency.

Perreault said that he also has concerns about air quality.

Plumas County Council Craig Settlemire outlined a three-step process that needed to be followed in seeking a state delay. He added that the intent isn’t to delay the process or oppose it, but to sort things out.

“I don’t care if we have one and nobody shows up at least we had them,” Supervisor Jeff Engel said about holding a public meeting.

“We’re very supportive of the project and want everything to go smoothly and everybody’s on board with that, right?” Simpson asked.

The document was available Feb. 20 through March 21. Comments must be received by 5 p.m. on the final day of review, unless Plumas County representatives have success in extending the deadline and/or in their request for a public meeting.

A letter requesting the extension to the comment period for the project plan on a new California Highway Patrol Quincy Area facility was sent Wednesday, March 13 — just a day following a discussion with members of the Plumas County Board of Supervisors.

The letter also requested a public meeting be held in Quincy.

Wilson also pointed out that the county is compiling its comments on the Mitigated Negative Declaration for the proposal and will be submitting those comments.