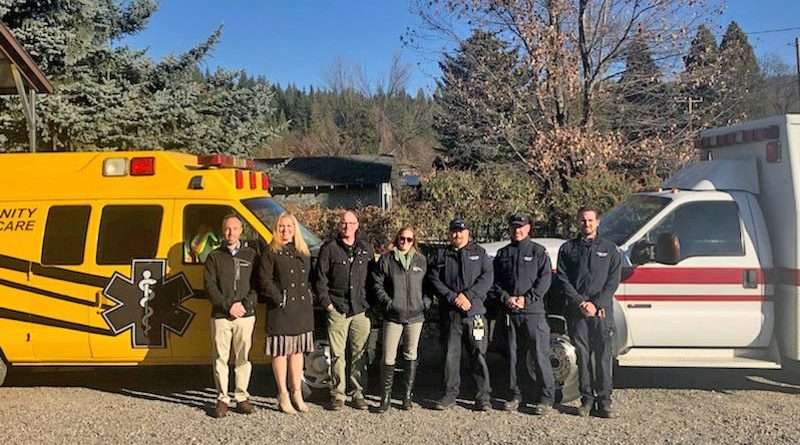 PDH and Care Flight assumed EMS operations in Greenville and the Indian Valley area at the end of October. They conducted a formal hand-off from PHI Community Health Services, a subsidiary of PHI Air Medical Inc., which has held the EMS contract with the Indian Valley Ambulance Services Authority (IVASA) since 2016. PHI’s contract with IVASA ended this year, and the organization chose not to renew the contract.

“We are very excited to partner with IVASA and the communities within Indian Valley,” said Matt Brown, Care Flight operations manager. “We have learned a great deal working with PDH since the beginning of our partnership in 2016 and we are looking forward to sharing those lessons and continue to enhance rural healthcare in our neighboring communities and even the region.”

Since partnering with PDH, Care Flight has taken the lead on numerous healthcare initiatives in and around the Quincy area, where its base of operations with PDH is located.

Notably, Quincy was designated as the first rural HEARTSafe Community in California in 2017 and that same year was recognized by Nor Cal EMS as having the highest out-of-hospital cardiac arrest survival rate in all five of the counties under its regulation.

Additionally, over 1,200 people have received CPR certification in the community within the last three years.

PDH and Care Flight plan on extending these initiatives, along with other programs, such as home wellness visits for residents that are deemed “at risk” by their local physician, EMT training for the local Indian Valley Volunteer Fire Department, emergency medical dispatching for 911 callers who will receive medical instruction over the phone until an ambulance arrives at their location, and access to the REMSA Nurse Health Line through the PDH hospital and clinics.