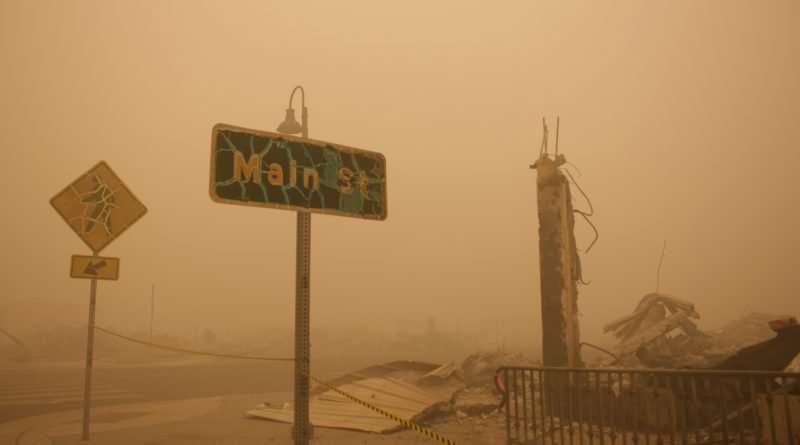 What's left of Main Street in Downtown Greenville on Aug. 7, 2021. The rebuilding process is underway and will be greatly aided with the PG&E settlement announced today, April 11, 2022. Photo by Spanish Peak Productions
News
April 11, 2022April 15, 2022 Editor

Those who suffered devastating impacts from the Dixie Fire may never fully recover, but the settlement announced today, April 11, between Pacific Gas & Electric and the district attorneys of the five North State counties impacted should help.

Of the five, Plumas County bore the biggest brunt of the fire, but will also reap the largest settlement amount — thanks in large part to the efforts of District Attorney David Hollister, who advocated strongly for Plumas.

During an interview Monday morning, April 11, Hollister discussed the approach that he and the other district attorneys used. Rather than taking a traditional criminal approach, which would have resulted in fines totaling $329,417 with Plumas County’s share being roughly $99,000; the DAs filed a civil complaint, which resulted in $17 million for Plumas. “The Camp Fire taught us a lot of lessons,” Hollister said. “Traditional criminal enforcement wouldn’t get us there.” Thought the interview Hollister reiterated that his goal was to ensure that those impacted would be compensated and that the county could rebuild.

The settlement includes good faith contributions to all five counties, payments to those who lost their homes and property, a program for timber landowners, wildfire mitigation elements, performance commitments, monitoring, and civil penalties.

Plumas County’s good faith contributions are to be dispensed as follows:

“We were trying to assist the nonprofits that helped with the fire, and also those organizations that could help in the prevention of future fires,” Hollister said. Hollister said he reached out to some organizations directly and others were brought to him by Supervisors Kevin Goss and Greg Hagwood. Each of the organizations will be required to share how the money is being spent. Plumas News will be reporting on those expenditures as they arise and how they are benefitting fire victims or making the county more fire safe.

To participate in the program, an online portal has been established (it takes about five minutes to fill out the form) and kiosks will be available throughout the northern portion of the county. Once an application is filed, PG&E has 30 days to respond to the application, and, if approved, the claimant has 30 days to accept or reject the offer. Then PG&E has 30 days to pay.  “We could be seeing checks cut within 90 days,” Hollister said. As an example, he cited a 2,000-square-foot home on an acre of land with no insurance. If the claim were to be filed by May 1, then PG&E would respond by June 1 and the homeowner would have until July 1 to accept the offer. A check for $810,000 could be cut by Aug. 1 ($800,000 for the home; $10,000 for the land.)

Those who have filed insurance claims would have those monies deducted from the PG&E payment. Hollister said that if one-quarter of those eligible apply for these funds, it would cost PG&E close to $250 million. When asked why all of those eligible wouldn’t apply, Hollister said that some residents could be fully covered by insurance, while others might be pursuing litigation against PG&E. Anyone who accepts this offer from PG&E would sign a waiver that establishes this would be a final settlement.

In addition to the monies already mentioned, each district attorney’s office will receive $1 million.

When asked where the funds were coming from, Hollister said that none of the money for the good faith contributions, nor the district attorney offices, would by recoverable by PG&E customer rates. As for the payments to property owners, Hollister said he hoped it would come from a fund that has already been established to help fire victims.

Hollister also stressed that this settlement does not impact separate civil litigation lawsuits against the county filed by the county, private citizens or the Forest Service.

The five North State district attorneys released a joint press release on the settlement today, as did PG&E (which also included a reference to Sonoma County (Kincade Fire). PG&E’s release read in part:

“PG&E has also entered into long-term agreements with Butte, Lassen, Plumas, Shasta, Sonoma and Tehama counties to strengthen wildfire safety and response programs and to work with local organizations affected by the fires to help rebuild impacted communities.

“These commitments include assistance for local non-profits, support for community colleges to expand their wildfire safety training and a direct claims program for victims of the Dixie Fire who lost their homes.

“PG&E also committed to a five-year monitorship of its vegetation management and system inspection work in the six counties. The monitor will be independent of PG&E and will regularly report to the district attorneys on the company’s progress. This role will be filled by Filsinger Energy Partners, which also serves as the Independent Safety Monitor for the California Public Utilities Commission. PG&E will continue to provide the resources needed to enable the monitor to meet its commitments to the CPUC, as well as additional resources needed to focus on PG&E’s critical wildfire safety work in these six counties.”

Other components of the settlement