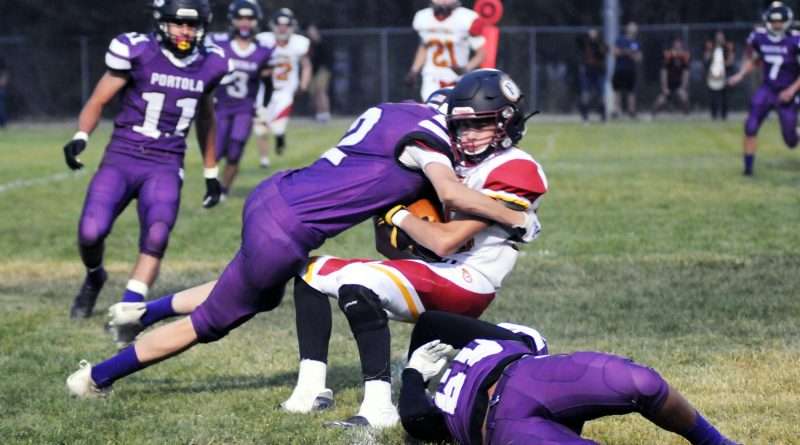 Michael Stewart, no. 2, and Tiger no. 69, Jacob Juarez work together to bring down the ball-carrying Bulldog Sept. 10 in Hamilton. Portola no. 11 is Miles Silva and no. 3 is Steven Peralta. Photo by Maria Popish
News
September 12, 2021 Editor

Portola High School football traveled to Hamilton to play the Braves for their first away game of the season on Sept. 10. There were hundreds of fans cheering the teams from the stands. Overall, the Trojans and Braves took turns on the scoreboard.

Hamilton scored two touchdowns and a 2-point conversion in the first quarter and a TD in the second quarter. Portola scored a touchdown in the third quarter and a TD and conversion in the fourth quarter. “I think the boys learned in order to beat an upper division school on the road you have to show up ready to play all four quarters,” said returning PHS head football coach Steve Heskett.

Hamilton Brave Danny Alvarez made a 60-yard rush to cross into the end zone in the first minutes of the game and followed up kicking the extra point to step the Braves into a quick lead, 7-0. Hamilton Connor Bonesio caught a 13-yard pass from Alvarez to score for Hamilton with two minutes left in the quarter. Alvarez kicked another good point through the Brave goal posts, 14-0.

In the second quarter, with 4 minutes left in the half, Hamilton’s Julian Olivarez made a 2-yard rushing TD. No extra points were added. With less than a minute to go, PHS Michael Stewart intercepted a Hamilton pass and took possession on the PHS 19-yard line. Tiger Tanner Carr completed a long pass to Stewart and had the ball on their 45-yard line at the half. The Tigers were warming up.

Coming back on the field after the half, Carr sent a long pass to Korey James to put the Tigers on the Hamilton 38-yard line. The Tigers were inside Hamilton’s 20 with 4 minutes remaining in the quarter. Stewart scored for Portola with a 1-yard rushing touchdown, 20-6 Hamilton.

Early in the final quarter, Hamilton was in position inside the Tiger 20-yard line. Portola held the Braves and took over possession of the ball on downs with 8 minutes remaining on their own 15-yard line. Hamilton Brave Armando Salazar intercepted a Portola pass on the PHS 42-yard line with 4 minutes left in the game. Again, the Tigers held the Braves who punted leaving PHS on their own 25-yard line. A long pass from Tiger Tanner Carr was caught by Korey James landing Portola on Hamilton’s 38-yard line with 2 minutes to go. Portola positioned themselves inside the 20 with less than a minute left. Carr threw a 9-yard pass to Cody Wilmer to score for Portola and narrow the Hamilton lead, 20-12. PHS’s Miles Silva caught the 2-point conversion pass from Carr to jump the final score up, 20-14. “I thought we played a much better second half after a very disappointing start in the first half,” said PHS coach Heskett.

The Portola Tigers will host the Modoc Braves this Friday, Sept. 17, for a non-league game at PHS starting at 7:30 p.m. The Tigers have a big stadium. Fans and spectators are welcome to attend. The Tigers travel the following week, Sept. 24, to Etna but return home to host the Los Molinos Bulldogs on Friday, Oct. 1, at 7:30 p.m. in the Tiger stadium.

Speaking of the Bulldogs of Los Molinos, the Quincy Trojans lost to them this past week, 36-12. The Bulldogs hosted Quincy Sept. 10 in front of a crowd of about 100 fans. Bulldog reporter Steve Navo reported that Quincy made a “big play” that put them on their own 33-yard line with 8 minutes left in the first quarter. It was a fumble by Los Molinos that Quincy recovered. The result was good for the Trojans as Nathan Friden scored a 3-yard rushing touchdown to be the first on the Bulldog scoreboard with 5 minutes left in the first quarter. The Bulldogs came back to complete a long pass from Ty Walker to Jojo Rocha, flipping the tables and putting Los Molinos on the Quincy 33-yard line.  Riley Zubia caught a 25-yard pass from Walker to even things up for the Bulldogs with a minute to go, 6-6. Los Mo went for the 2-point conversion to take the lead, 8-6. Bulldog Zubia made a tackle for a Trojan loss putting QHS on their own 20-yard line. Bulldog Walker threw a long pass to Rocha to take the Bulldogs possession all the way down to the Quincy 44-yard line as the first quarter ended.

Four minutes into the second quarter Walker’s 5-yard pass was completed by Rocha to score again for Los Molinos. A successful Bulldog conversion by rushing Carsen Seamen brought the Bulldogs to 16-6 with 8 minutes left in the half. Harrison Hamre intercepted a Quincy pass as Los Motions took possession on the QHS 30-yard line. Tucker Sides scored for the Bulldogs with a 1-yard rushing TD with 5 minutes left in the second quarter, 22-6. The Trojans successfully blocked the 2-point conversion attempt. Quincy continued their momentum as Eli Allred traveled into the end zone with a 58-yard rushing touchdown with 3 minutes left in the half to narrow the Bulldog lead, 22-12. The Bulldogs completed a dramatic pass from Walker to Zubia to put Los Motions on the Quincy 12-yard line. Quincy held the dogs until Los Motions had to turn the ball over on downs and the Trojans took possession on their own 7-yard line with under a minute. And that was it for the half.

Los Molinos’ Riley Zubia recovered a Quincy fumble which lined the Bulldogs up on the Quincy 23-yard line with 6 minutes remaining in the game. Kale Bagshaw scored for Los Molinos with an 8-yard rushing touchdown with 4 minutes to go. The 2-point conversion attempt failed, 36-12. Zubia recovered a Quincy fumble putting the Bulldogs on their own 40-yard line. Quincy recovered a Los Molinos fumble taking possession on the Bulldog 35-yard line. Bulldog Sam Elliot intercepted a Quincy pass to put the Bulldogs on their own 20-yard line but there was not enough time to increase the home team lead, and so ended the game. There was lots of action on the field. “Our defense held tough through the game and I’m proud of their effort,” said head football coach for Quincy, Daniel Waltermire. “We’ll take advantage of the bye week and prep for a solid Fall River team on the 24th.”

Quincy football hasn’t expanded the 9-game schedule, but they are hoping. “We might get to reschedule North Tahoe and/or Hamilton,” said coach Waltimire. Fans are invited and welcome to attend the home games at Feather River College. Next up, the QHS Trojans take on the Weed Cougars Friday, Oct. 1, starting at 7:30 p.m. Masks are not required for well-spaced outdoor events however it turns out they do keep the face warm in cold weather.

Portola, Chester, and Quincy High Schools, as well as Feather River College stadium, have all stated that no restrictions are in place for outdoor athletic events such as football games. Fans are welcome and encouraged to attend games.