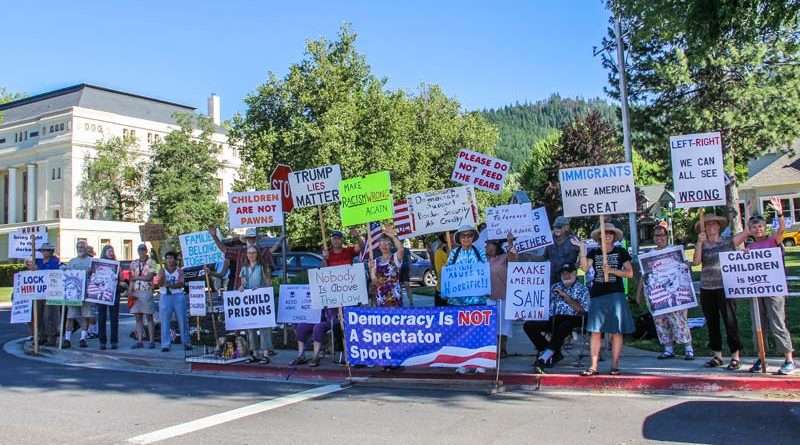 Nearly 40 protestors from all over Plumas County joined forces in downtown Quincy on July 12 with the nationwide Lights for Liberty vigil to demand an end to forced detention of infants and children at the U.S. southern border. Many of the vigil participants came from the Plumas-Sierra Political Coalition that is comprised of Democrats from Sierra and Plumas Counties and the Indivisibles groups from Eastern Plumas and Indian Valley.
News
July 17, 2019 Roni Java, Staff Writer

Nearly 40 Plumas residents from all over the county gathered on Main Street at Dame Shirley Plaza in Quincy on Friday, July 12,  to stand in solidarity with thousands of Americans nationwide during the Lights for Liberty Vigil held “to end human detention camps” at the U.S. southern border.

Carrying messages such as “Left-Right, We Can All See Wrong,” the protestors waved to an endless stream of honking cars and trucks filled with drivers who waved back with shouts of support.

The national vigil saw protests in more than 700 cities calling for an end to the compulsory separation of migrant families seeking legal asylum at the U.S. border and demands for the reunification of detained children as young as infancy through teen years with their families.

Thousands of children remain in federal custody at various detention camps under conditions that congressional visitors describe as unsanitary and unacceptable.

“We cannot live isolated from the rest of the world; their problems are our problems,” said Faith Strailey of Quincy, Chair of the Plumas County Democratic Central Committee, one of the rally’s main organizers. “This movement was organized because the incarceration of asylum-seeking refugees and the separation of children and babies from their families is unconscionable!”

Strailey explained the combined group joined the nationwide vigil out of concern that the federal government has treated refugee individuals as criminals.

“They have used children as pawns to deter lawful asylum seekers and ignored international and federal laws regarding the treatment of refugees,” Strailey said. “The consequences have been horrific. The death of children and the suicides of detainees are now a part of the American legacy. This is not the America in which many of us believe. Common decency and morality requires that we speak out to condemn these policies and end them.”

Having recently joined forces as the Plumas-Sierra Political Coalition, the four groups are working to address a variety of concerns and issues, including support to overturn the U.S. Supreme Court’s “Citizens United” ruling and rein in political spending designed to influence American voters.

Lights for Liberty is a coalition of grassroots activists with support from long-standing immigrants’ rights organizations and other organizers.

More information can be found at www.lightsforliberty.org.