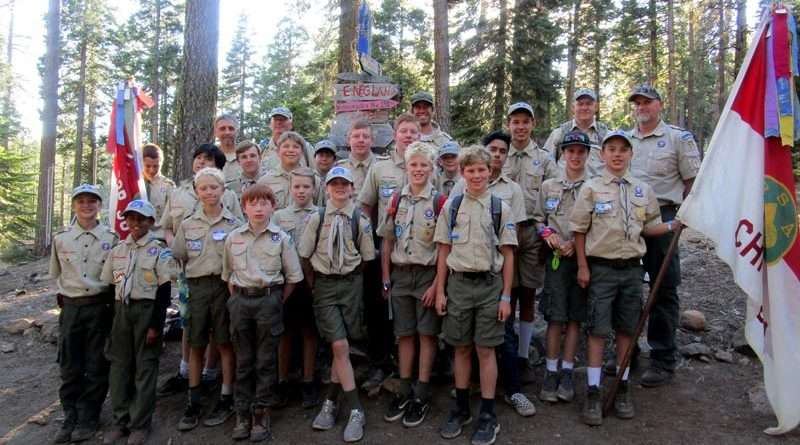 Chester Troop 36 and Chico Troop 31 pose together in front of the Camp Fleischmann directional sign just to make sure they know the right way to go as their camp week comes to a close. They will be working together again this fall with their Christmas tree fundraiser. Photo by Gregg Scott
News
July 17, 2019 Gregg Scott, Staff Writer

Scouts in Plumas County are indeed fortunate to live in close proximity to one of the premier Scout summer camps in Northern California.

Some of you may have noticed that the term “Boy Scout” was not used and for a very good reason.

The 109-year-old program of leadership, citizenship and outdoor skills that has been the hallmark of the Boy Scouts is now available to young ladies as well, and Camp Fleischmann, just outside of Chester, is fully staffed and ready to take on the additional Scouts.

Chester Troop 36 shared campsites with Chico Troop 31 during the week of July 7 thru 13 at Fleischmann.

These two troops are also partners each fall in their Christmas tree fundraiser that helps fund yearly activities for both.

During the same week, Quincy boys’ Troop 151 helped show the new girls’ Troop 151 the ropes and all the options available.

Girls’ Troop 151’s attendance at summer camp represents a first for Lassen District Scouting and is hopefully just the beginning of the new wave.

There are sure to be numerous “Firsts” that will be accomplished this year during the five weeks of programs at the camp.

With over 40 Scouting merit badges available, six climbing walls and the cliffs to challenge all rock climbing skill levels, a temperate waterfront offering most any watercraft or swimming, along with archery and shooting sports, there is something for everyone.

Oh, did I mention handicrafts galore, a quad-riding program, mammal, reptile and insect studies and a full on mountain man program.

During the summer the camp hosts just over 700 Scouts plus another 200 or so Cub Scouts during a split week (two three day programs) family camp.

Quincy’s girl troop helped set a first at camp as part of an all girl color guard.

The international Scout representative this year was a young lady named Sopio Ramishvili from the city of Tbilsi in the eastern portion of the Republic of Georgia.

She joined several other female staff at Fleischmann and educated the Scouts about girls in Scouting in her country.

One subject that should never be ignored is that age-old question about, “ How is the food?”

One Troop 31 adult leader quipped, “It’s not steak and lobster from a five star restaurant, but is way better than most camps I’ve been to in the past.”

The important thing is there didn’t seem to be many overt complaints and most Scouts were going back for seconds.