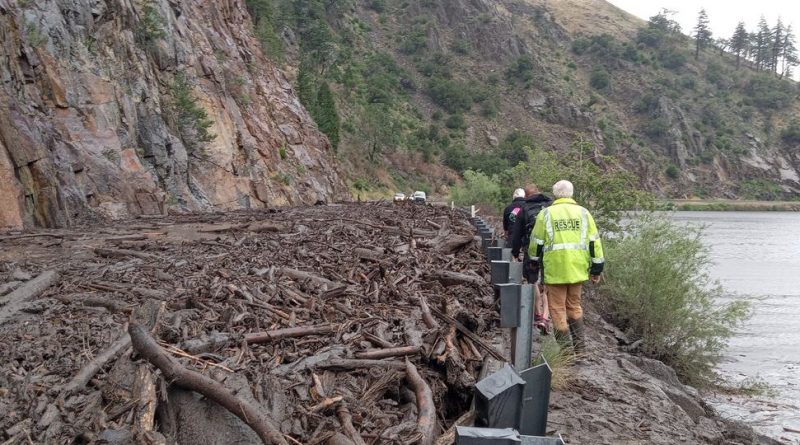 The morning after mud and debris closed Highway 70 through the Feather River Canyon, the coordinator of Plumas County Search and Rescue, Mike Grant, discussed the situation rescuers encountered the afternoon of June 12 in the Chips Creek/Rock Creek areas.

“It’s a mess; I was shocked,” he said, of the amount of debris that covered the highway in a portion of the Dixie Fire burn scar area.

Search and Rescue got the call around 3 p.m. when it was reported that vehicles were trapped between slides in the Canyon. En route, the rescuers encountered CHP Officer James Stowe who was setting up a closure at Caribou (later that would be moved to the Wye). He said that Stowe warned him of the conditions, but Grant said that he still wasn’t prepared for the amount of damage to the roadway, guardrails and bridge that he saw. He recalled that Search and Rescue had recently trained in the area and “all the area where we parked was gone.”

Ultimately, CHP officers from the Butte County side of the slides transported the woman west, while Plumas Search and Rescue escorted the couple east, so they could return to their friends’ home. “It’s lucky that the people were in good enough physical condition to make the walk,” Grant said as he described the one-third to one-half mile of knee-deep mud and ash, rocks, wood and other debris.

He said the winds were howling up to 60-70 miles per hour out of the west, forcing them to stop at times. The rain continued to pour. When asked if he ever felt in danger, he said that he was able to keep an eye on the NOAA weather app and watch what the storm was doing.

Grant said they tried to move as quickly as possible. “I don’t know what we would have done if someone wasn’t ambulatory,” he said. “It was too windy for a helicopter; and given the conditions it would have been difficult to carry someone out of there.”

Search and Rescue transported the couple to the Greenville Wye where they were met by their friends to return to Chester.

Grant reiterated that he was surprised by what he saw in the Canyon — both from a weather aspect (compared to what was happening in Quincy) as well as the extent of the debris strewn over the highway and the destruction it caused.

Caltrans reports that Highway 70 remains closed from Jarbo Gap to the Greenville Wye due to multiple slides in the Feather River Canyon between Rock Creek Dam and Belden. There is no estimated time for when the roadway will be reopened.