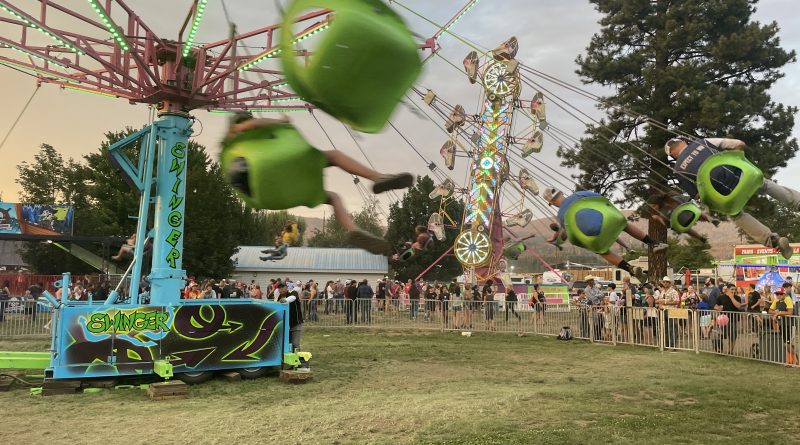 The Plumas Sierra County Fair was earlier in the year for 2022, deeper into the summer months vs. fall, and it really showed on the thermometer. But neither the change of date nor the heat kept people from standing in line midday just to gain entrance to this year’s extravaganza.

“Besides being the best fair ever, it was certainly the smoothest Fair in my experience,” said Fair Manager John Steffanic. “We received next to no complaints, in ALL areas. The attendees were grateful and appreciative, and most importantly, ready to enjoy themselves.”

It has been two years since Plumas and Sierra counties have been able to host a fair in Quincy. “I believe the break made everyone ready for a good time,” said Steffanic. “Attendance was up at least 10 percent from 2019.”

The music concert was the first booked into the large arena during the fair in at least 10 years. On Saturday night, before the Jake Jacobson Concert started in the Grand Stand Arena, the fair was hopping! The carnival area was packed; a couple hundred music lovers filed into the grandstand bleachers to hear the opening act of Danny Horton and Rico Salina, and there were lines in the food court 30 people deep.

One interesting things was, the fair manager anticipated every revenue source would be down by about 20 percent in sales. “But they were up 10-15 percent,” said Steffanic cheerfully. Actually the food lines were short compared to the carnival ride lines. Some ride lines were an unbelievable 50-60 persons deep! “Carnival sales were up from 2019,” reported Steffanic.

Vendors, information booths, and displays filled the indoor Serpilio Hall to the brim. “This was the fullest I’ve ever had Serpilio Hall with the fewest “no-shows,” said Steffanic. “The only area we were down was competitive exhibits; Art Barn, Home Arts and Floriculture were down, but there was a whole new positive vibe in each department with new personnel running each area.”

It is a careful transition between those with all the experience of past decades transferring the torch of their knowledge to the next generation. Plumas and Sierra County has been lucky to see energetic people come on board that are interested in continuing the traditions of the County Fair. Hopefully the combination of tried and true knowledge mixed with “new blood” will be a recipe that makes the efforts for the community as effective as possible. Old hands were able to relax a bit and enjoy the fruits of their many years of labor organizing fair displays and exhibits. And speaking of old, and new, the fair employed one of Plumas County’s newest citizens, Marni Tucker, as the purple-haired story-spinning Chipper Express Driver. The service is traditionally provided by a weaver of tales, mostly untrue, while transporting people from one end of the fair to the other, for one reason or other. “Marni!” said Steffanic. “She was fabulous as the Chipper driver.”

The earlier dates were definitely hot, “but there were plenty of places to seek refuge and I think we have a pretty good plan for many more (water) misters next year,” said Steffanic. “As far as I can tell, 2023 should be the best fair ever!” I’m not surprised, are you?