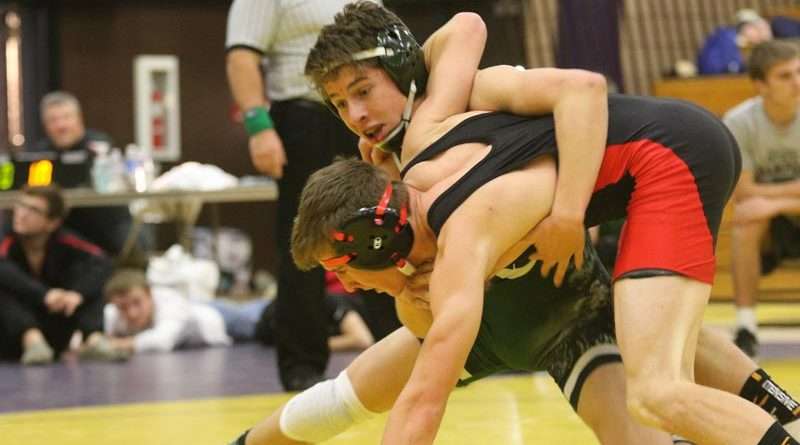 The Plumas wrestlers, Bonner Montgomery from Chester and Russell Nickerson from Quincy, earned the opportunity to compete in Bakersfield at the state championships on Feb. 21 and 22.

The big arena can be intimidating and it was the first trip to the state games for both boys. Day one of wrestling was a bit lucky for Quincy’s Russell Nickerson. “We are still wrestling tomorrow,” said assistant coach and father Russell Nickerson. “He lost one match and had a bye.  So technically he is 1-1.” QHS head wrestling coach Cody Clayton confirmed, “On to day two.” Nickerson lost on day two.

Chester’s Bonner Montgomery was not so lucky to receive a bye and lost both of his first day bouts. “Could have wrestled better, but I have brought kids here before and the stage is huge compared to Chester,” said CHS head wrestling coach Tom Rogers. “He will be back.”

And no doubt he will. Rogers has had good success with the young talent at Chester High including his sons Tony and Tanner Rogers. The eldest, Tony, graduated last year and is wrestling at Lassen College after competing at CIF championships four years in a row.

“I am proud of the season he had, but expect bigger things from him next year,” said Rogers of Montgomery. “The whole first year experience (at State) is something a lot of kids don’t get until they have been here.”

Chester had a very small wrestling team this year but pulled out quite a few first place positions with wrestlers like Callum Kremer, Tanner Rogers and, of course, Bonner Montgomery. “Our goals will be set higher next year and hope to get on the podium somewhere,” concluded Rogers.