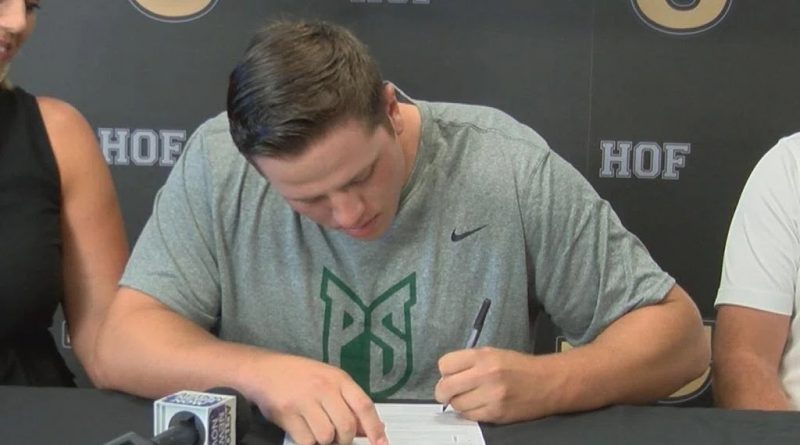 Multi-sport, multi-talented Chandler Ross has signed with the Portland State University Vikings to play football. The 2019 Portola High alumnus will be taking off on his big adventure July 20. He will live in Portland, Oregon’s largest city and the 25th largest city in the USA, with a population of 650,380 in a city that covers 145 square miles. Portola’s population is 2,104 and spans an extensive 5.4 miles. Wow. “Off to the big city” for sure! Portland State is the second-largest school in Oregon with 26,012 students. Football games are played at the Hillsboro Stadium, west of downtown, where the seating capacity is 7,200. I wonder how many could squeeze into Portola High School’s Bob Wise Memorial Stadium at Portola High? 500 maybe? Chandler’s 2019 graduating class was 31 students.

Chandler Ross earned himself a full-ride scholarship for a f0ur-year education by signing to play with the Vikings. They flew him out for a visit and he really liked Portland. He thought is was clean, not a lot of heavy traffic, and that the people were “really nice.” The attraction of so many cultural activities was of interest to him as well. “There is so much to do there,” Chandler said. He was recruited from Butte College as a sophomore with three years left to play ball, “which is really great,” said Chandler. Signing on as an Offensive Lineman, Chandler stands 6’5” and weighs in at 270 pounds after three years with the Roadrunners, playing just one year due to Covid.

His grandparents, Ricky and Candy Ross of Portola, are excited for the opportunities Chandler has earned. “We are very proud of him,” said grandpa Ricky. “He had a couple of offers … Western Illinois and Portland both offered him a full ride; you know less than 2 percent of kids get offered a full ride.” Ricky said Chandler chose Portland so that his family would have more of an opportunity to see him play. Along with possible trips up the western coast for Portland home games in Hillboro, the Ross family will have a chance to see Chandler play as a Viking in San Luis Obispo when the Vikings take on the Mustangs Saturday, Nov. 19 at Cal Poly. Oregon season opponents are closer to California than those of Illinois for sure, but it will still be quite a trek to Washington, Idaho, and Montana if they plan to see more than a couple of games live.

Chandler has been playing for the Butte College Roadrunners since graduating from Portola High School in 2019. Chandler attracted attention with his performances on the football field as a PHS Tiger and was chosen for the Lion’s All-Star football 42nd annual game. Only seniors are selected for the honorary game that plays each year after graduation.  “Portola football, the coaching staff, and the entire school here at PHSare proud of Çahandler Ross,” said PHS Tiger head football coach Steve Heskett. “He is a strong, talented young man with a bright future. We are excited to watch his impact at Portland State and all of his future endeavors.” Chandler said he is grateful to Coach Heskett, Coach Bubba Saenz, and Chris Wicks for all the guidance they provided during PHS football. “They definitely pushed me to move forward,” said Chandler.

Although Chandler was a standout on the football field, he also made a mark on the Portola baseball diamond pitching and scoring plenty of runs for the Tigers. He played football and baseball all four years of high school and played basketball as a freshman and sophomore. “Football is definitely my favorite,” said Chandler.

After that, the standout athlete moved on down the hill to Chico to attend one of our two “local” junior colleges. Butte was a good fit for Chandler and his experience there helped him to choose Portland from his multiple offers. “The coaching staff (at Portland) is similar to Butte,” said Chandler, “and I also like that I will be closer to family and that they will be able to attend some games.” And he likes that. “One of my buddies (from Butte College football) will be up there playing, too,” said Chandler.

The full ride scholarship is more about paying for a good education for Chandler, who is majoring in business. “I plan to come back home to work in Portola,” said Chandler. He wants to follow in the footsteps of his father and grandfather. “I will be coming in from the bottom up,” said Chandler. His business degree will be something he can contribute to the family business but he described a career path that will not be skipping any steps, no straight to management for him. “I’m going to learn the business from my grandpa and my dad,” said Chandler. His grand-dad went straight into the business without college, and his father attended American Valley College for awhile before starting tutelage under his father. Chandler hopes to come into the family business with a four-year degree when it comes his turn to learn the ropes and follow the footsteps of the Ross patriarchy. All of that is quite a ways away though.

There is a whole world of new experiences waiting on the horizon for the Portola graduate as he begins his four-year adventure of football and business education in Portland. But home won’t be too far away, “I’m going to take Plumas county with me,” said Chandler gratefully. “If not for Plumas County, I would not be where I am at.”