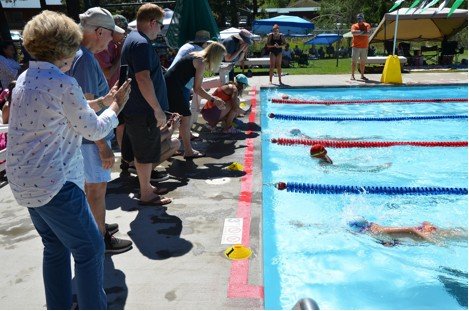 The Portola Penguins Swim Team hosted the Lassen Volcanoes Swim Team on Aug. 21 for the second and last home meet of the season. Twenty-nine Volcanoes competed against 16 Penguins in 28 individual races and two relays. The meet was followed by a ribbon ceremony complete with a silent auction, BBQ, and birthday cake for the Penguin’s coach, Jennifer Condliffe.

“My son Jacob and I came to Portola from Rocklin to watch my nephew Piper and the Penguins compete against the Volcanoes,” said Svitlana Stosen. “It was a beautiful warm day, and the kids were excited and eager to swim.”

Penguin records were set by some Portola team members, including Sadie Bourgoine who got a time of 21.25 seconds for the girl’s 25-yard backstroke, and Kylie Low who swam the 50-freestyle race in 33.76 seconds.

“The Penguins thank the Volcanoes for coming to Portola on what happens to be a school night,” said swim parent Maria Guy. “It was a lovely way to end the swim season, as well as summer vacation for our kids. They are very much looking forward to setting new records next year.”

The Penguins hosted a booth Aug. 26 at ‘Music in the Park’ event in Portola to share their successful swim season with the community and as their final fundraiser of the summer.