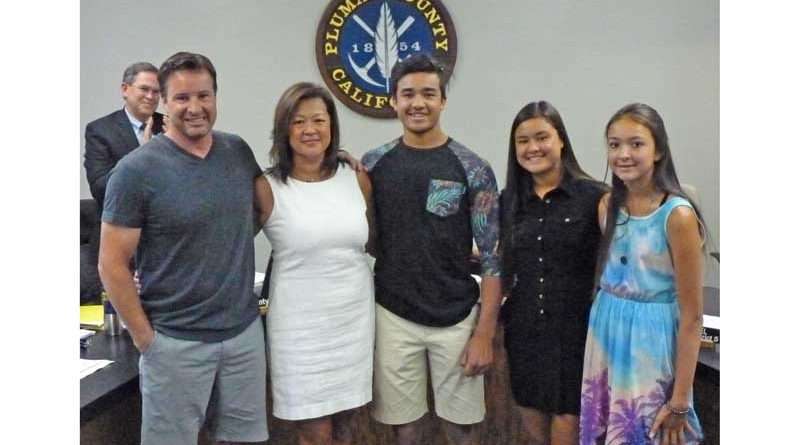 It was a bittersweet day when Plumas County gathered to honor Mimi Hall, the outgoing director of the Plumas County Public Health Agency.

Before giving Hall a Certificate of Appreciation and Recognition at the board of supervisors meeting on July 18, Board Chair Lori Simpson told the audience that Hall was always there to pitch in to help save any situation that needed saving. She listed some of the organizations that Hall helped lead or improve.

Hall built an effective team and successfully orchestrated her own replacement.

Earlier, before successfully convincing the board to add an additional health education coordinator or specialist to her agency, Hall choked up a bit, “This is my last official business as director, It’s all hitting me today. My whole life has been in Plumas County.”

Craig Settlemire, county counsel, said of Hall, “She is  a ‘can-do’ person and a problem solver.” Noting that he has had the opportunity to work with many in his role as county counsel, Settlemire proclaimed, “Mimi is one of the finest administrators I’ve ever worked with.”

Board member Sherrie Thrall thanked Hall for bringing health services to remote parts of the county, including her district.

Board member Jeff Engel said former supervisor Jon Kennedy advised him, “When she speaks, shut up and listen.”

Elliott Small, director of social services, said of Hall, “She focuses on the real world, what is going on down on the street.”

Johanna Downey, executive director of the Plumas Crisis Intervention Family Resource and Wellness Centers, said to Hall, “You have been such an inspiration. You put your heart into everything you do.”

Andrew Woodruff, acting director of the public health agency, said to Hall, “I am so proud of Mimi.” “Mimi,” he added, referring to Hall’s family as well as public health staff members present in the room, “You have two families.”

Hall responded to Woodruff, “I feel I have the best department. We believe in the work we do and we are committed to public service.” She added, “It’s not a one-woman show. I couldn’t have done this alone. I love you all.”

To which her staff responded, “We love you, Mimi.”

Hall will start her new position as public health director for Yolo County on July 24. Yolo county is located west of Sacramento.

However, Hall’s family will remain living in Quincy until Kainoa finishes high school and Mimi will be returning on the weekends.

– Director of the public health agency for 10 years.

– Restarted Alcohol and Drug services after five years without such services in the county.

– Chaired the Legislative Committee of the County Health Executives Association of California.