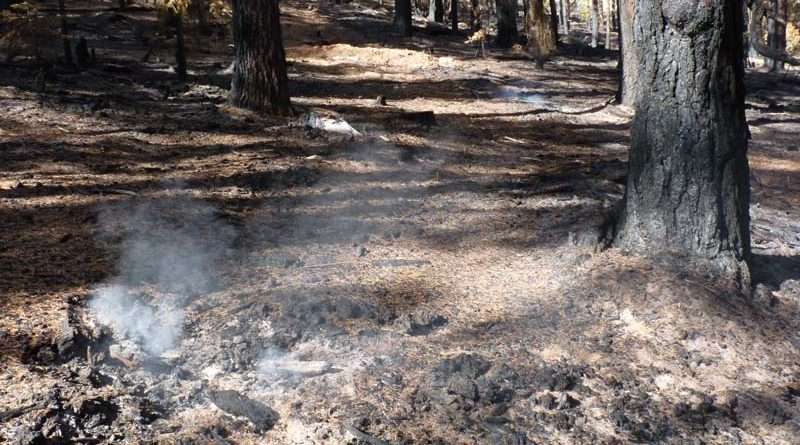 Area of the forest still smoldering from a prescribed fire lit on May 25. The purpose of prescribed fires is to reduce fuels in the understory that might allow fire to reach the crowns of mature trees, perhaps killing them.
News
July 10, 2017July 7, 2017 Steve Wathen, Staff Writer

Many of us saw the signs and the smoke from prescribed fires this spring, but few of us had the opportunity to see the results of those fires on the ground.

On May 25, a 15-member initial attack hotshot crew and water tanker crews used drip torches to set fire to 150 acres near Mount Hough.

Ryan Bauer, fire program manager for Plumas National Forest, with 22 years of experience working with fire, designed the prescribed burn and led a field trip to the area on June 1, a week later to see the results of the fire.

Short-term goal of the prescribed burn

The short-term goal of the prescribed burn was to eliminate as much of the fuel under mature trees as possible without killing more than 20 percent of the overstory trees.

Long-term goal of the prescribed burn

The long-term goal of prescribed fire was to return the forest to conditions that existed before fire suppression began early in the 20th Century. Prior to fire suppression, catastrophic overstory fires were less common in our forests than they are today.

To reduce fuel loads to manageable levels prior to the  prescribed fire, smaller trees were removed and chipped, to be used as biomass for energy production.

However, said Bauer, unmerchantable trees removed before are cut and stacked for use by firewood gathers.

Outcomes of the burn

Bauer estimated that fuel loads in the understory were returned to near pre-European levels and that fewer than five percent of the overstory trees were killed by the fire.

A few small areas, however, were burned hot enough to kill all the trees on the site.

A diversity of outcomes is important

Bauer noted that not all species are adapted to low intensity fires.

Therefore, said Bauer, “In the big picture, I don’t think small patches of high intensity fire, where all the trees are killed, are a problem.” He noted that it adds ecological diversity to the landscape.

It turns out, said Bauer, that spotted owls forage in areas that have burned catastrophically. Other species of plants and animals live in such areas for their entire lives and rely on catastrophic fires for their continued presence.

The role of Native Americans

Fires set by Native Americans, by early pioneers or by lightning burned often enough that forest understories were kept open.

The canopies of mature tree were also kept separated so that high intensity fire couldn’t travel from tree to tree in the overstory.

Native Americans were experts at using fire to reduce the likelihood of catastrophic fire, to encourage the presence of preferred plants and animals, to smoke out insect pests from oak trees and for other purposes.

The role of fire suppression

Fire suppression began in the early 20th century in response to two very large and deadly fires in Michigan and the northern Rocky Mountains.

Relatively few people back east at that time realized that stopping low intensity fires would lead to a build-up of small trees and woody debris in forest understories over time.

This built-up of fuel now allows fire to burn up into the canopies of mature overstory trees, making catastrophic fires the norm today.

Early pioneers often imitated what they saw native people doing to protect against catastrophic fire. However, they were overruled by leaders at the national level anxious to eliminate all fires.

Setting fires can be risky

Igniting prescribed fires is, literally, “playing with fire.” There are a lot of variables to consider when deciding when to intentionally set a forest on fire.

Bauer has been working with fire long enough that he has the task of designing prescribed fires down to a science.

Weather controls how ignitable forest fuels are, how intense a fire will burn and how much smoke a fire will produce.

For this reason, there is only a short window in spring and late fall when temperatures are assured to be cool enough and moisture levels high enough to keep the intensity of the fire under control.

If a prescribed fire is too hot, it can leap up into the canopy of the larger trees.

If the fire is too cool, it won’t burn up enough of the understory fuels to make the time and expense of burning the forest worth the effort.

A race against time

The problem is that live and dead fuels in forest understories accumulate faster than understory fuels can be reduced by the Forest Service during the short windows in spring and fall when prescribed fires can be performed most safely.

Bauer estimates that under pre-European conditions, 82,000 acres of the forest would have burned each year, mostly at low intensity.

In order to reduce the threat of catastrophic fire, Bauer estimates that 12,000 to 24,000 acres of Plumas National Forest would have to be treated each year.

PNF was able to burn 875 acres from April to June this spring. Last fall, only 425 acres were burned due to drought conditions followed by the rapid onset of snow.

On the other hand, catastrophic wildfires have burned 15,000 acres on average within the Plumas National Fire over the past five years. Bauer said most of these acres burned in one catastrophic fire, the 2012 Chips fire.

Catastrophic fire appears to be winning the race to thin and reduce fuels in our national forests.

Role of the Quincy Library Group

The huge number of acres needing treatment was one of the reasons that the Quincy Library Group focused on thinning and burning within strips of land located along ridges.

John Sheehan, a former member of the group, said that research has shown that reducing fuel loads and separating overstory tree canopies does limit the spread of catastrophic fires. Sheehan is on the board of Plumas Corporation, Feather River College and several other institutions in Plumas County.

With extra funding from congress and a more aggressive burn policy, the Quincy Library Group was able to thin and/or burn 300,000 acres within the 1.5 million acres of Plumas National Forest, Lassen National Forest and the Sierraville Ranger District of Tahoe National Forest by 2012.

The costs of prescribed fire versus catastrophic wildfire

Prescribed fire typically costs approximately $1,000 per acre. Most of this money is used to provide the manpower and equipment needed to set the fire and to be available to put out the fire, should it get out of control.

As expensive as prescribed burning is, it is a bargain as compared with the costs of attempting to suppress catastrophic wildfires, said Nancy Francine, ecosystem staff officer for the Plumas National Forest.

She said that catastrophic fires cost $7,000 per acre. Catastrophic fires also kill most if not all of the large old growth overstory trees and cause semi-permanent damage to soils, streams and other natural resources.

However, said Francine, whenever the federal government has given the forest more money for thinning or prescribed fire, “it has just focused a spotlight on us.” She said this has then resulted in litigation and a slowing of number of acres treated.

On the positive side, Francine said, “Plumas National Forest is now more truly integrated in terms of what work goes on in the forest in relation to fire than it has been in the past.” This includes hydrology, timber sales, vegetation management, wildlife, etc. She said that reducing the risk of catastrophic crown fire is now included in all forest decisions.

Protecting your family from catastrophic fire

The Fire Safe Council can be reached by visiting plumasfiresafe.org , emailing [email protected] or calling 283-0829.

The Natural Resources Conservation Service reimburses private landowners for similar work that landowners perform or contract out on their land.

Some of the things that need to be considered before a prescribed fire:

How much fuel is in the “understory” beneath the “overstory” of larger trees?

Can the fire be managed so that it doesn’t burn out of the control?

Will the fire burn with just the right intensity so that it consumes most of the fuel in the understory but doesn’t kill too many of the trees in the overstory?

Can the amount of smoke produced by the fire be controlled?