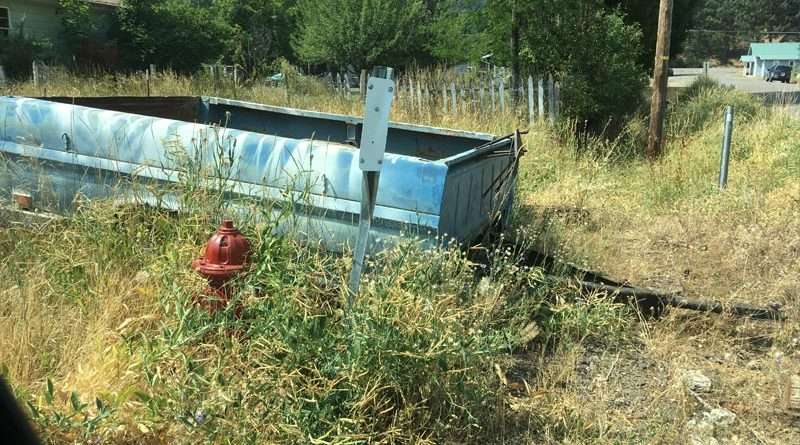 Not a good year to let a property go to the weeds. A fire hydrant in the area known as “The Flats” is barely visible. Photo by Meg Upton
News
August 14, 2018August 9, 2018 Meg Upton, Staff Writer

It doesn’t take much to start a fire in our present dry drought climate. The fire on Lee Road in East Quincy gave a perfect example of the importance of eradicating weeds and debris from town properties.

In the area of Greenville known as “The Flats,” five property owners have been served with letters from the Indian Valley Community Services District for allegedly violating Ordinance 6.02.050 — which sets out requirements for the removal of fire hazards such as weeds and debris from the premises.

The property owners have until Aug. 24 to comply with the ordinance. At the September IVCSD board meeting, directors will have a resolution to consider on weed abatement. For property owners that do not comply, tax liens against the properties could be next.

Some of the properties look abandoned and some are in foreclosure. Some properties are inhabited by senior citizens, who might not have the resources to remove the dried grasses and debris. All have at least knee high weeds and several have flammable debris in the yards.

There is also one property in Taylorsville that received a notice to remove weeds and debris.

Residents have been vocal on the need for removal. “We don’t want to go up in flames. A fire could sweep right through here in seconds,” said Dottie Preston about the problem. She indicated that in the past, the county had sent people out to cite property owners giving them 30 days to comply.

The protocol through the IVCSD means non-compliance could run through fire season, with concerned neighbors having to just hope that nothing bad will happen.