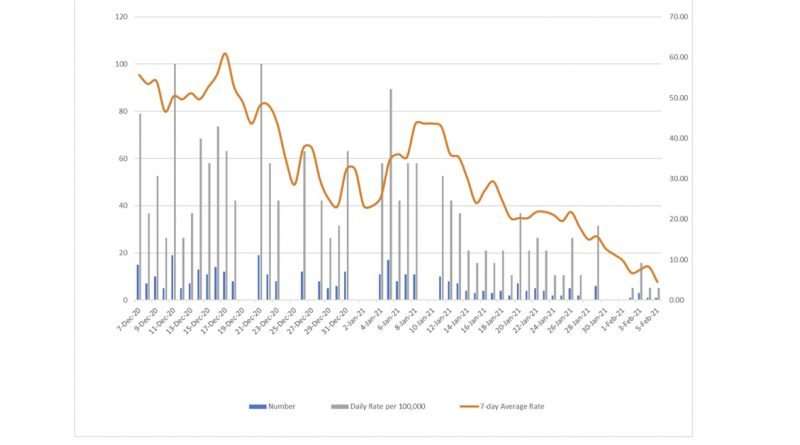 Plumas County will vaccinate 600 individuals who are 75 years of age and older this week. Using data collected on its information portal, Public Health workers contacted those qualified and set up appointments. There are roughly another 250 to 300 individuals in this group that will be contacted when more vaccine is available.

Public Health Director Andrew Woodruff provided the updated information to the Board of Supervisors during its Feb. 9 meeting. Although that was good news, both Public Health and the supervisors have heard complaints about the vaccine rollout.

“I want to acknowledge the frustration over the availability and process,” Woodruff told the board. “We continue to not have enough vaccine to meet the need.”

Woodruff said that to accommodate the demand for vaccination scheduling, personnel are being shifted from other duties and are being trained to handle calls and streamline the process.

“It’s really tough,” Woodruff said. “I want to thank my staff for their hard work. We are working with a lot of frustrated folks.” He said he understood that people want to stay healthy and it’s Public Health’s role to facilitate that goal.

Currently Public Health is gathering information through its own portal but will transition to the state’s system titled My Turn at some point.

“We were originally assigned to transition this week; but we want to learn a little more about it first,” Woodruff said. Because it’s an online system and Public Health is focusing on the county’s older residents (some of whom don’t have Internet access), he wants to ensure that they aren’t bypassed. “Equity and access remain our number one concerns.” He added that the state is aware that access is a challenge for rural counties.

While the focus is on vaccines, testing continues at all three local hospitals and during Saturday events in conjunction with the state. “We are still ironing out the kinks with state-assisted testing,” Woodruff said. A successful event was held in Portola on Feb. 6, while the next event is set for Greenville this Saturday, Feb. 13. There were challenges with the initial Greenville event, which Woodruff hopes have been resolved. Additionally, Public Health is partnering with local schools to access state-sponsored testing.

As of this morning Feb. 9, Plumas County reported 637 positive cases to date; 10 of which are active. Over the weekend, no new cases were reported; though five positive cases were reported Monday. The overall numbers are trending downward, and when Woodruff shared a graph with the supervisors indicating the falling numbers, he said,  “I love looking at that because the seven-day average is going down.”

Plumas remains in the purple tier in the state’s Blueprint for a Safer Economy framework. But the county met the metrics for the red tier for one week with a 2.2 test positivity rate and a case rate of 6.8. A county must demonstrate that it meets the criteria for two weeks before a move to a less restrictive tier can be considered. If Plumas County remains successful in meeting the criteria, and moves to the red tier, restrictions would ease. For example restaurants could return to indoor service at 25 percent capacity.

Woodruff completed his presentation by highlighting “four bright spots” that he sees: