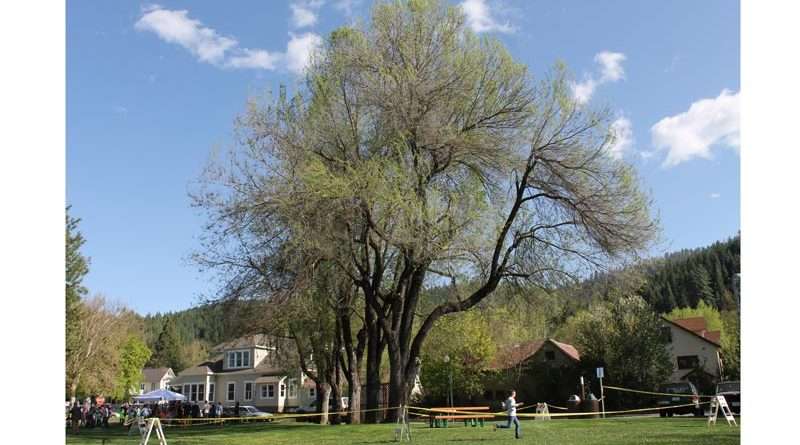 Several of the elms at the Dame Shirley Plaza will come down, but the public will be given an opportunity to learn more of their fate and help determine what kind of replacement trees will be chosen. Photo by Victoria Metcalf
News
May 12, 2019May 9, 2019 Victoria Metcalf, Assistant Editor

All living things come to an end.

Over a 12-year span, three arborists have given expert opinions on the health of Dame Shirley Plaza’s nine elms. The plaza is located across the street from the Plumas County courthouse.

One arborist found health issues among them in 2007. At that time an arborist recommended removal, replacement and pruning, said Plumas County Administrator Gabriel Hydrick at a Quincy Design Review Committee meeting May 2.

Quincy arborist Scott Edwards was hired to examine the elms and give an opinion. “Briefly, all of the trees have problems that could lead to large branch failures,” he said in his report in 2007.

“It is my opinion that all of the elms in Dame Shirley Plaza area should be removed,” said Robert A. Kelly, a certified arborist. Kelly’s comments were contained in a letter to Facility Services Director Kevin Correira in late April 2019.

At this time the public will be given the opportunity to help decide not just the fate of the Dame Shirley Plaza elms, but help select replacement trees.

With some branches coming down this year, the issue has once again come to the public’s attention. “Public safety is of the utmost concern,” Hydrick told the board and the dozen people who attended the meeting.

Hydrick said it was recommended, “we phase it out and replant the trees.”

Hydrick recommended removing the elms along the drive aisle first. This is the row of trees near the ADA picnic table area. And then the trees nearest the larger parking area would come down. “We don’t want to wipe it all out at once,” he said.

Correira agreed with Hydrick, saying, “Eventually we would remove all the elms.”

John Kolb, speaking from the audience, urged caution. He said the public would like to see the arborist’s plan.

A retired Plumas County Public Works official, Kolb said he was involved in the design and construction of the Dame Shirley Plaza. And volunteers did a lot of the work, he added.

Kolb said that special effort to do the grading and improvements were done with protecting the elms in mind, but also with the knowledge they would eventually be replaced.

“Number 9 is very dear to our hearts,” said Quincy resident Bob Zernich. “And we would ask that you not take that one down.”

Tree 9, as indicated on the arborist’s chart, is the one closest to the war memorial at the corner of the park. Zernich was instrumental in getting that memorial built.

“I might even chain myself to it,” Zernich said, adding a little humor to the meeting. “I’d hate to see that one come down.”

Zernich went on to say that some people have talked about a gazebo for the park. He suggested that the area now known as trees 1 through 5 would be a good spot for it.

“These elms make a statement when you come into town,” Hydrick said, echoing something said by Zernich about tree number 9. (This would be approaching Quincy on Highway 70 past Spanish Creek Bridge on the edge of town.) Hydrick said they would need to select trees that would continue that impression as replacements.

Don Gasser, who identified himself as a forester and arborist, said he examined the elms just that day. In his opinion some of them should go and others should be pruned. “I would leave 1 through 5 for the time being,” he said. These are the trees closest to the ADA facility. Gasser said that elms 1 through 5 and 6 (along the main parking area) would be the most noticeable and there would be public outcry if they were removed right now.

Gasser did agree that the trees are all in need of pruning.

“I hope you’re not talking about 10-gallon trees,” Kolb said. Although he understands that the cost of large tree replacements is significant, he didn’t want to see “little spindly trees to replace 100-year-old trees.”

Gasser agreed with Kolb about the size of replacement trees.

“Is there additional cost if we went with Don’s (Gasser) recommendation,” asked John Mansell, a member of the Quincy Design Review Committee. Hydrick said he didn’t have a problem with Gasser’s suggestion. “You still go up there and hold your breath,” he said about tree safety and the county’s liability.

Mansell followed up on the safety issue. “You feel pretty strongly that there’s a hazard waiting to happen?”

Gasser said that his examination of the elms revealed “rot going up a long ways,” and other trouble indicators of the trees’ health.

During the meeting, no one seemed enthusiastic about Kelly’s suggested replacement trees.

“I know that the community is going to want to be involved,” Mansell said about the process.

Mansell recommended getting input from the community.

“You have my design wheel spinning,” Hydrick said. His background is in landscape architecture and the Sierra Nevada. He said he could create a design using larger plantings, select fast-growing trees and add color as recommended by some of the audience.

Correira said he brought the health of the elms to Hydrick’s attention in February, soon after Hydrick was hired as the county’s administrator.

Hydrick said he attempted to track down people who were involved at earlier stages of Dame Shirley Plaza’s development, but with little success.

Supervisor Lori Simpson said she had concerns about what the state might want to do with the plaza. At one time the state had plans to build a new courthouse on the site. They went to the expense of removing the underground fuel tanks left over from when the old hotel that stood on that spot.

At length, Mansell made a motion to remove elms 2,3,4 and 6, and prune the rest.

Harris recommended a town  hall meeting be arranged to discuss the trees. “I think we can do that,” Hydrick said.

Other trees on the plaza site are not under consideration for removal at this time.

“Every one of them has some type of defect that possess a threat to anyone or anything within its reach,” Kelly told Correira.

“They have all been topped in the past. As you know this leads to extremely weak connection points where the new branch begins to grow,” Kelly said. “Fifteen or 20 years later this is a real problem.”

Although the oak tree is to remain at this time, Kelly recommended that it “should go simply because of aesthetics. It will never be a nice tree.”

Kelly had no problems with the existing cedar tree, but said that the Ponderosa pine was out of place. He said that kind of tree doesn’t like summer watering, which was pointed out in Edwards’ 2007 report, and it isn’t protected by other similar trees from the wind.