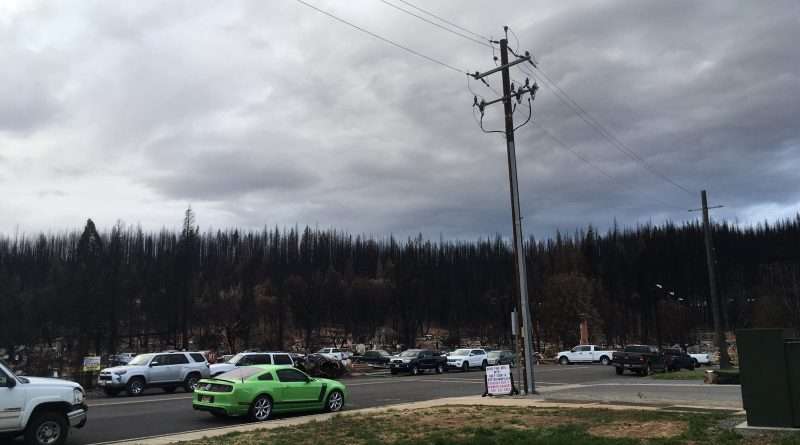 Greenville Elementary School auditorium/cafeteria room was packed on the evening of Wednesday Oct. 6, as the Dixie Fire Debris Removal Workshop got underway. The room was somber with many former residents of Greenville looking visibly tired. The major focus of the evening being the looming Right of Entry applications which need to be in for Phase 2 of clean up to begin in Greenville.

In order to be eligible for the free government program, property owners must file a Right of Entry application complete with signature that indicates Cal OES and their contractors, and subcontractors can be on a given parcel and remove debris from it.

Supervisor Kevin Goss welcomed those assembled, followed by a few anti-government remarks by District 1 representative Doug LaMalfa (he later rescinded his remarks as they pertained to the government officials in the room). LaMalfa asked those assembled whether they’d sifted through their properties yet and was surprised to learn most have not sifted, and some in the audience explained they were not sure of the protocol in sifting through their lots.

The trepidation some were feeling on what the stages of cleanup are could have been the theme of the evening. On hand were Cal OES managers to explain the process once more and to remind Dixie Fire survivors that the deadline for Right of Entry paperwork is October 15.

Kelsie McInnis, the division leader for the debris clean up announced that the first phase of cleanup was done and that phase two is starting now.

McInnis explained the process for those still on the fence. First step is enrollment, site assessment (assessing where and how many vehicles and structures were damaged or destroyed). Next an asbestos team comes in to remove any toxic asbestos material. Next will come structural removal and soil sampling.

McInnis answered a few questions that  residents had such as the eligibility for cleanup (a property must have at least a 175-square-foot structure as well as not disturbing the property) and what constitutes disturbing the property. While walking onto a property isn’t considered major disturbance, heavy equipment moving or spreading of debris around a parcel is considered a disturbance.

McInnis also informed the audience that structural debris removal bids are happening currently and the contractors will be known soon. While encouraging the audience to fill out the Right of Entry application, McInnis said that those who change their minds after they’ve filled out the application can still do so provided that work hasn’t started on their property yet.

Next, Cole Glenwright from CalOES spoke about hazardous tree removal. Right of Entry includes hazardous trees which is defined by trees that may pose a danger to public roads or public spaces. They will also be removed from parcels along with structural debris.

Questions were asked regarding whether property owners could fell their own trees. They can and they can keep the wood. However if CalOES and the Debris Removal team have to fell them, they must take them away as part of debris removal.

Glenwright also touched on insurance concerns that residents may have. By law there can be no duplication of benefits, so property owners who enter into the free government debris removal program who have insurance will see that any unspent portion of their insurance which covers debris removal will go to that purpose. Those without insurance will not have this issue. He also reiterated the intent of the CalOES program to procure and hire local contractors and subcontractors for the clean-up project.

After the Right of Entry program information, Jerry Sipe talked about the alternate debris removal program where the property owner and possibly their insurance company take the job on for themselves. He reminded residents that currently the nearest places receiving debris removal from wildfire are located in Wheatland and Anderson and not close by (which can cost more in transport). Bryce Allwardt spoke about selecting a contractor in this capacity.

The speakers finished, the audience was free to go to the back of the room and fill out the application or to turn in already completed applications. A representative from Frontier Communications was also in the back of the room to speak with customers above restoring phone and Internet services. Some places in Indian Valley will be served by the temporary tower in Taylorsville.

At the end of the workshop, however, many former neighbors could be seen just visiting with people they haven’t seen in the two months since the fire. Some while mingling, spoke of the people they knew who had left permanently—all ideas weighing heavily on those inclined to rebuild after debris removal.

While the deadline for ROE progam is Oct 15, the deadline to apply for FEMA (the two have been frequently confused) is October 25. Information on both programs is shared on the Plumas County website https://plumascounty.us under the Dixie Fire heading.