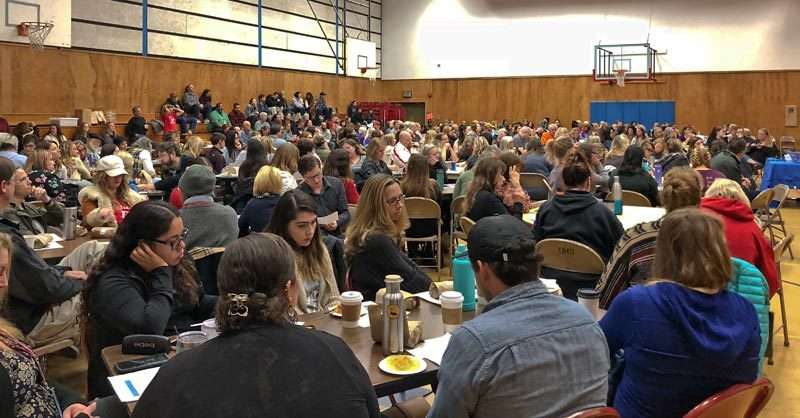 As terrifying as a potential school shooting incident would be, school safety is a top priority locally and nationwide and learning what to do under mock circumstances has become a necessity for education professionals.

“We hope an incident never happens here, but we need to be informed and prepared for the possibility,” Kristy Warren said Nov. 2, addressing approximately 300 of her fellow employees with the Plumas Unified School District.

School was out for the day and Warren, assistant superintendent for instructional services, and her colleagues were at Quincy Junior-Senior High School’s lower gym to attend PUSD’s armed intruder safety training drill.

Frank Carey, PUSD’s safety officer and facility foreman, is ALICE-protocol certified (alert, lockdown, inform, counter and evacuate). He planned the event to offer district personnel a realistic idea and experience of what to expect should an “active situation” ever unfold at Plumas County schools.

The training was held in partnership with an interagency team of emergency responders from the California Highway Patrol, Plumas County Sheriff’s Office and the Regional Emergency Medical Services Authority Care Flight.

Teachers, administrators and staff from all eight PUSD school sites, including kitchen staff, maintenance personnel, tech support, bus drivers, nurses, classroom aides and others attended the safety drill that provided an emotionally intense experience valuable for its focus on preparedness.

According to the district, the REMSA Care Flight team conducted a tactical casualty care workshop, CHP officers conducted a weapons-familiarization session, and CHP joined with the PCSO officers to create a realistic “active shooter” scenario.

In one session, CHP Officer Jonathan Bruno talked about the importance of being able to help law enforcement with as much information as possible in case of an event. He told the attendees that school shootings do occur and we need to be prepared because trainings like fire drills have been shown to reduce fatalities.

Todd Kerfoot of REMSA covered practical, hands-on training in the casualty care workshop along with Tyler Baker and Sam Blesse.

PUSD employees learned techniques to stop profuse bleeding, applied tourniquets and developed other skills, which could be life-saving in the event of a car wreck, an accident, or if a school shooting ever took place.

During the “active shooter” scenario, strict safety protocols were observed.

PCSO Officer Carson Wingfield and CHP Officer Bruno teamed up for the session, giving participants opportunities to ask many questions.

The officers acknowledged that drill exercises are not easy trainings to undergo, but they are educational and can improve participants’ instincts and therefore their preparedness.

As the day concluded, PUSD Safety Officer Carey talked about accomplishing the goal of the training, which was to give staffers some idea about what to expect from law enforcement and emergency response teams in the event of a real school shooting situation.

He also wanted them to understand the kinds of response tactics they might encounter and what goes into the decision-making process during a “live” crisis response.

Carey commended the school district employees for attending the serious training and told them drill exercises like this are “the foundation of preparedness” from which the district staff can build and help to protect themselves and students.

Feather Publishing Co., Inc. extends special thanks to PUSD Media and Marketing Technician Cary Dingel for her contributions to this report.