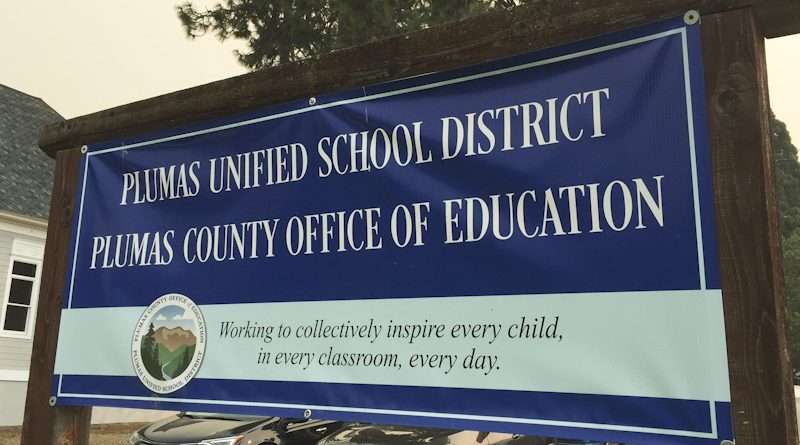 The Plumas Unified School District board of trustees honored 19 retirees during its June 22 board meeting, though none were able to attend in person.

That didn’t stop their supervisors from lauding them for their service. Portola High School Principal Sara Sheridan began the accolades, acknowledging four individuals. She opened with Robin Adrian-Murray who was retiring after 26 years. Adrian-Murray began her career serving meals to the students in the cafeteria and also taught in the culinary program and the garden. “Her chocolate chip cookies are the stuff of legends,” Sheridan said.

Next up, Sheridan lauded Rick Bass who has now retired twice. He began his career in 1980 as a coach and teacher at PHS; where math was his specialty. “He is our school historian,” Sheridan said of his knowledge of the campus and its staff and students. He retired officially five years ago, but then returned to teach junior high school students.

Of classified employee Donna Waller, Sheridan quipped that she “worked at PHS longer than I have been alive.”

Quincy Elementary School Principal Lara Hollister honored Ruth Hintz for her 18 years of services, calling her an “absolute expert at third grade,” and adding, “She’s the gentlest, kindest person in the world.”

Hollister also singled out Michelle Graham for her 33 years at QES where she taught fifth grade, third grade, and the opportunity program. “She’s devoted a lot of energy and love to those students,” she said.

He also honored Celeste Higby for her 25 years at CHS where she taught English and drama. He noted that she was “an avid Volcano fan” and always dressed up on game days. “She never settled; always trying to become a better teacher,” he said. “She’s beloved.”

Hernandez also recognized Brian Scott for his 19 years of teaching Spanish. “He would step up; doing about everything to help out,” he said.

Lisa Cavin, who is the deputy superintendent of business services recognized Rhonda Breaux for 12 years at the district office. “She has just been such a wonderful person to work with,” Cavin said. Breaux worked in finance and HR and Cavin said during the past three years she led the safety team in earning awards.

Assistant Superintendent Kristy Warren spoke about Yvonne Braddick, who has been with the district 39 years. “She thought it would be a few years and then move on,” Warren said, but like many others, she made Plumas County her home. “She has exceptionally high standards; high expectations for student performance,” Warren said.  She ended her career as a teachers’ coach.

The final accolades of the evening were reserved for Superintendent Terry Oestreich who was scheduled to retire this month, but had to step away from her duties earlier than expected due to illness.

Oestreich has been a member of the Plumas Unified School District and County Office of Education team for 23 and a half years.  Before PUSD, she started her career in education as a career center tech in Sierra County.  She joined the Plumas team in 1993, working for the county and district, and moving up through the ranks.  A statement of introduction read: “Over the years, she evolved as a teacher and educator, always assuming more responsibility and touching the lives of more and more people, whether staff, families, or students. Throughout her long career, she has brought the most important parts of education to the fore: high expectations, clear communication, and caring relationships.”

Following are the tributes from her district office staff. It should be noted that there wasn’t a dry eye in the board room, and speakers choked back tears as they made their remarks.

It is difficult to find words for me to adequately convey how much Terry has impacted my life. She is an amazing mentor, always showing grace and providing support to everyone around her. I feel incredibly blessed to have gotten to know her over the last seven years, and I am thankful and proud to call her my friend. Thank you Terry for being a true inspiration for me.

It has been an honor to work with Terry at two different points in my career.  She is talented, articulate, caring, thoughtful, and grace-filled.  A student advocate first, she is also the consummate colleague.  Thank you so very much, Terry, for your many years of service to our school district and your friendship.

Two of the many important lessons I learned from Terry were the importance of service in leadership, and the ability to adapt and pivot as the landscape changes.  Terry has been a true mentor to me, and to so many others.  Terry continues to inspire me to do my best work, and I know that I’m not alone in this. Terry, thank you for so much, but mostly for just being you.

Terry taught us to look for the opportunity to learn and grow from every situation and to assume and expect the best.  We faced many challenges with Terry as our leader, and have a long list of accomplishments.

I don’t know a Plumas Unified School district without Terry O.  When one thinks about a legacy, we can all hope to rise to Terry’s standards and make the impact she has had on a generation of staff and students.  Whether it be from starting the Business and Finance class, Plumas Academies, or ROP programs, her programmatic legacy is in nearly every facet of PUSD.  But more than that, Terry’s legacy is in each of us.  Through her work ethic, high standards, hard conversations, being a lifelong learner, excellent communication, and organization, she is a model leader, one that I try to emulate daily.  While I’m not there, I am grateful for all of the time we have spent together, and for having learned from her along this journey. Terry has been a mentor, colleague, and friend and I will miss her tremendously.  May your retirement be filled with grace, joy, grandkids, and time on that Harley, which I’m still waiting for you to ride into the DO (district office)parking lot one of these days.

School Board President Traci Holt said that the board was working on a fitting tribute on behalf of the board.