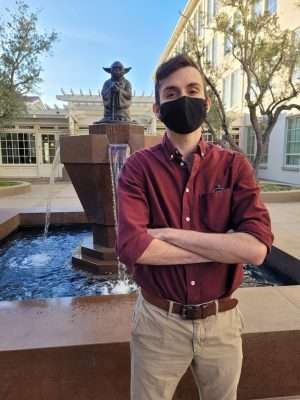 Knox Wyatt Hollister (Quincy High School class of 2016) graduated from the University of California, Berkeley in the summer of 2020 with a Bachelor of Arts in Cognitive Science. Wyatt graduated in four years by taking summer session courses including upper division classes in Astro Physics and Brain Trauma.

During college, Wyatt was active in film making and club soccer while working jobs ranging from being a movie theater usher to an assistant wedding photographer. Though he graduated, without ceremony, at the height of the pandemic, and into a frozen job market, Wyatt did not complain and instead followed Covid rules keeping him and others safe while honing his technical skills.

This month, Wyatt’s patience and perseverance paid off when he was offered a job, and began working, at Industrial Light and Magic (ILM) at the Presidio Campus in San Francisco. Founded in 1975 by George Lucas, ILM is the leading effects facility in the world, serving the motion picture, commercial production, and attraction industries. ILM has created visual effects for over 325 feature films and has played a key role in seven of the top 10 worldwide box-office hits of all time and has contributed to 25 of the top 50. Some of ILM’s visual effect can be found in the Star Wars, Avengers, Jurassic Park, Indiana Jones and Harry Potter movie series.

Wyatt continues to be exceptionally grateful for the support of Plumas County – including the many kind folks who acted in and watched his many efforts at local film production through the years. Earlier this month, Wyatt noted it’s “hard to believe it’s actually happening, but today I start my first day as a Technical Assistant at Industrial Light and Magic. I cannot wait to start this next chapter of my life, and I hope sooner rather than later I have a chance to celebrate with everyone who made this day possible – I am so thankful for all of you!”