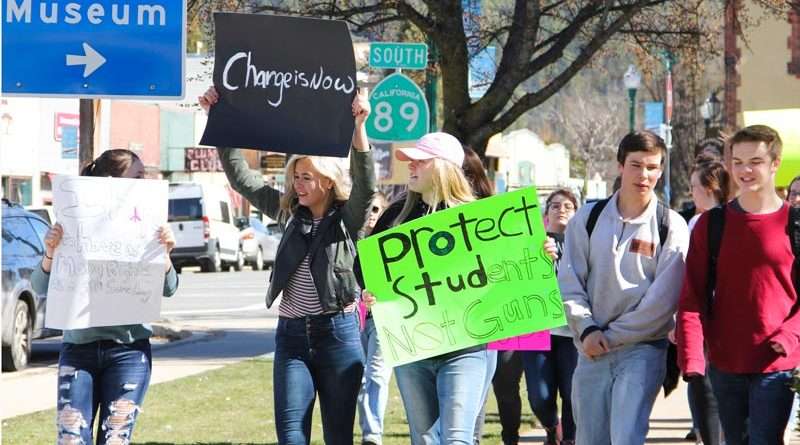 They came to show solidarity with the families and victims of the tragic Feb. 14 mass shooting at Marjory Stoneman Douglas High School in Parkland, Florida — calling for the right to attend school in safety and protesting a growing “desensitization” toward violence in American society.

“Why are we here and what do we want? CHANGE! Change is Now!” the students chanted on the courthouse steps.

Their signs carried messages such as “I Hope to Have as Many Rights as a Gun Someday,” and “Don’t Shoot. I Want to Grow Up!”

One understated poster board depicted a time cycle of a mass shooting followed by “thoughts and prayers, Facebook posts, debates, everyone forgets, Congress does nothing, crickets chirp, new mass shooting.”

Passersby stopped here and there to watch the students take turns addressing the group. One man came with his phone and videotaped the protestors saying, “What you guys are doing is important. Standing up for what you believe in, that’s the right thing to do.”

Sophomore Cameron Ball stood before the group and said, “We’re all here for the same issue — mass shootings. People kill people. None of those people deserved to die.”

Junior Emma Thompson held a “Change is Now” sign aloft and said, “I stand with all the victims of all the school shootings that have happened since Columbine. We need to raise our voices about the desensitization toward violence in our society. People are being shot every day and America doesn’t even notice anymore. That’s wrong!”

Freshman TyAnna Farmer brought a local perspective to the tragedy, saying, “We never think it will happen here.”

Riley Gamberg, a junior, asked, “How long does it take you to get to be allowed to drive a car? You have to take a written test. You have to complete a state-approved class. You have to complete training in person with someone who is a licensed professional. It takes what? About six months. Why don’t we require that for someone to own an automatic weapon?”

Ninth-grader Mayson Flesuras added, “My family, we own guns. Because people can buy or make their own meth, should we make that legal? If we can’t even drink, why should anyone be able to buy a custom, automatic weapon at age 19? Because it’s legal?”

Colton Peters, an 11th-grader, said, “Yes, people can own guns, but that doesn’t give anyone the right to go into school and start shooting.”

Freshman Samantha Busselen added, “In my family, we’ve been taught to use guns and to do it safely. But still, my little brother is afraid to go to school.”

The upper-class members encouraged their fellow protestors from the middle-school grades to speak out for their beliefs, too, many of them saying, “You guys are so brave, coming out for this.”

One seventh-grader overcame her shyness in front of the crowd and said, “The fact that we have to be here and have this conversation, that we have to talk about this, is ridiculous.”

Wrapping up the impromptu protest, 11th-grader Thompson told her fellow students, “When we started planning this, we thought we’d have maybe two or three students who would come out and march for this. I’m really proud of all of you for speaking out. And if we’re going to be stuck in detention and have to write essays about why we did this (march), then send a copy of your essays to your senator and your congress member.”

Classmate Olson said, “We’ll get about half an hour of detention. Hope to see you all there.”