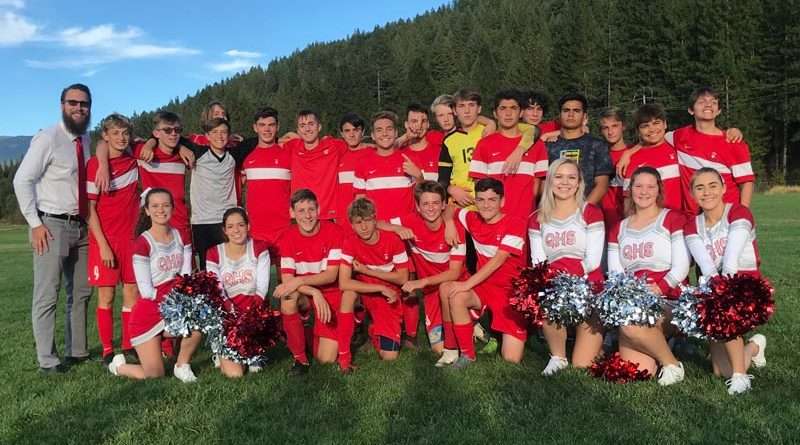 The Quincy Trojans are supported by the QHS cheer squad as they aim their sites on the championship title. Photo by Leslie Edlund

The first game of the Northern Section Soccer Playoffs kicked off Oct. 29 for the Trojan boys in Quincy. The competition came from Weed for the 3 p.m. game and Trojan fans trickled on to the field during the first 30 to 40 minutes of the game. Regular soccer matches have been starting all season at 4 p.m. But QHS fans had faith in their team and were already chatting and planning where to stay for game two in Northern Section playoffs on Thursday in Tulelake.

The Weed team was tough and showed no indication that they would roll over for the Quincy team to move on in the playoff ladder. The score stood still at zero-zero. Parents and other supporters of athletic program were still dribbling in, paying their $8 entrance fee for the CIF playoff game, taking their time to get settled into the cheering section, when the Weed team scored a mighty goal. Strong and swift, they planted the ball in the net directly past QHS expert goalie Cameron Dingel.

Plans for lodging in Tulelake suddenly ceased. “We have to win this game first. Oh my gosh,” said volunteer ticket vendor Suzi Brakken. “I hope I didn’t jinx them!” “Don’t say that,” replied another QHS fan. “Besides, there’s no such thing as ‘jinx.’” Well jinx or no jinx, the Trojans challenged the Weed team with great plays and good shots but no scoring for what seemed like forever. In fact, it was probably less than 15 minutes.

Initially there appeared to be no plan, random passing dotted the field with neither team taking control, but slowly the Trojan force rose its head. Patterns began to appear on the field, intention and design started to show. Hard plays and good shots were made as the Trojans swept the field in formation. After a few valiant tries well worthy of a point, determination and solid effort were rewarded with the tying goal for the Quincy team.

Off the field, fans remained on their toes cheering for the QHS boys. On the field, the Trojans put in gear the technique and skill that has won for them all season with the guidance of QHS head soccer coach Greg Prouse. The combined effort worked. The Trojans won the first Northern Section playoff match from their worthy opponents, 5-1.

Goalie Cameron Dingel covered the QHS goal the entire game and deflected 16 shots attempted by the Weed Cougars. Winning goals for QHS were scored by Trojans Will Ross, Jonathan Swan, Luis Santos and two by junior Nick Caiazzo. Santos provided three assists, in this his first game of the season. Shots at the Cougar goal were made by Santos (6), Swan (4), Caiazzo (3) and Ross with one.

Tulelake would have been much closer and more convenient for the Weed team to travel for the second Northern Section playoff game, but the Trojans didn’t mind. “There is a really nice Duck Lodge,” said Brakken, who helped parents organize logistics for the long-distance competition.

As it turned out, the second Northern Section playoff match fell on Halloween and there would be no school the following day, perfect for spending the night after the second challenge in Tulelake.

The Trojan team, fans and parents all showed up to take on the Tulelake Honkers on Oct. 31, but were not able to come home with a win or a third game on the schedule for playoffs. The Honkers scored seven goals in the first half and three more in the second half while keeping the visiting Trojans scoreless.

The QHS soccer program has received tremendous support. It is the only school in Plumas County able to support both a girls and a boys team. The boys have 22 athletes on their roster. Six seniors will be graduating in 2020, but leave behind a strong crew to carry on the Trojan legacy the boys have built.

Girls soccer at QHS was coached by Ava Hagwood. The last game for the girls was a match with Fernley that the Trojans lost 1-0. “We had a wonderful season this year! I thoroughly enjoyed working with the team and watching their growth as athletes and as individuals over the past few months,” said Hagwood. “I am incredibly grateful for the support from parents, community members and staff. Also, I would like to thank Coach Prouse for his guidance through out my first year coaching.” Sounds like she will be back.