As the Emotional and Spiritual Wellness Committee of the Dixie Fire Collaborative began organizing commemorative events for the Dixie Fire, they recognized how widespread the impacts of the Dixie Fire were across all of Plumas County.  This view was further expanded when they recognized the impacts of the Bear and Minerva fire.  Therefore the decision was made to organize a series of events which would, as much as possible, encompass all of the emotions and impacts of these terrible fire seasons, bring solace and completion to those who suffered most, and serve as a marker for all to move forward toward a better future.

Greenville and the pathway of the Dixie Fire up the Feather River Canyon were the areas of greatest home destruction, but all of Plumas county suffered greatly in these two fire seasons.

The folks at the West End Theater are loaning their facility at no charge, and so there will be two events at this venue for this coming Friday and Saturday, Aug. 5 & 6.  Both events will feature the talents of local musicians, artists, poets, and Quircus, plus the artistry of classical guitarist Jack Cimo.  Friday is a more structured event being organized by “Artistic Director” Lance Barker via the Facebook page – Memories of Plumas, Quincy.  This Friday event will also immediately follow the “Dixie Fire Stories” event at the Plumas Arts Gallery next door to the West End Theater. 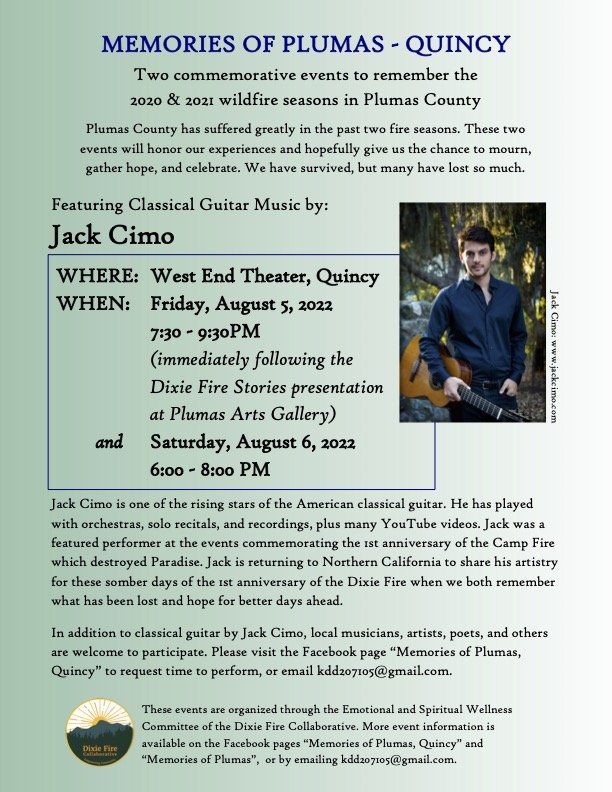