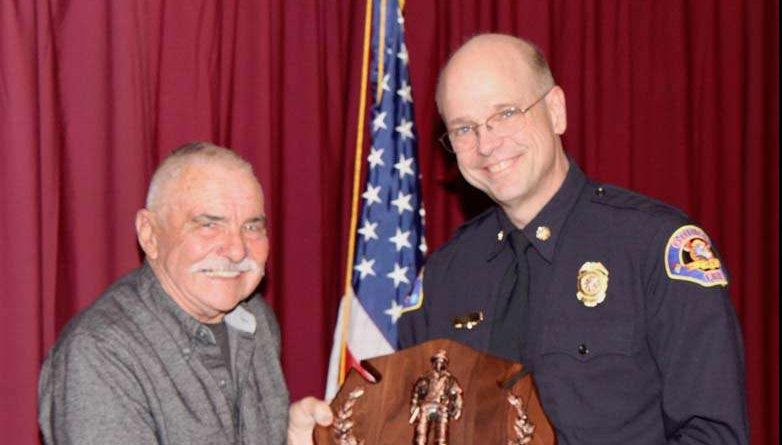 Quincy Fire Chief Robbie Cassou, right, honored volunteer firefighter Jim Mann when he retired. Now it's Cassou who will be retiring, effective next June. The fire district is seeking his replacement but acknowledges it will be difficult to fill his boots. Plumas News file photo
News
December 9, 2022December 14, 2022 Editor

The Quincy Fire Protection District has begun its search for a new fire chief to replace Fire Chief Robbie Cassou, who is retiring on July 11, 2023 — which, not coincidentally, just happens to be his 62nd birthday — after more than 40 years with the Quincy department, serving the last 16 years as its chief. His plans to retire have been known to the district for several months, but were made official during the fire district board’s November meeting.

Cassou first joined the Quincy Volunteer Fire Department in 1980 as a volunteer firefighter. At the encouragement of then Fire Chief Andy Anderson, in 1985 while still active with Quincy Fire, Cassou took a full-time position with Los Angeles County Fire Department to further his firefighting and emergency medical training knowledge and experience while still volunteering his services to Quincy Fire when available. In 1989 he returned permanently to Quincy taking a full time job at as a paramedic at Plumas District Hospital, becoming PDH’s director of Emergency Services from 1992-98. During that time, he became more involved with Quincy Fire as a volunteer firefighter, a captain and an operations chief. Cassou was named fire chief in 2007.

“I’m proud of the work we have been able to accomplish during my career. I think Quincy Fire has been an inspiration to departments throughout Plumas County and beyond. Over the last 20 years our regional fire academy has raised the bar for fire service training and has brought all the county departments together in a way not seen before,” commented Cassou.

He continued, “Following in the footsteps of my predecessor, Fire Chief Andy Anderson, I am glad I was able to bring about positive change to Quincy’s fire and emergency medical services. I have enjoyed bringing my training and experience to the table, but, as with all of us, eventually it’s time to step aside and usher in a new generation of progress and leadership. In this time of ever-increasing regulations and the steady decline in volunteerism, I see my retirement as an opportunity to bring new ideas, enthusiastic leadership and a new perspective on recruitment and retention of our precious volunteer firefighter and support team personnel.”

Former Plumas County sheriff and current District 4 Supervisor Greg Hagwood said, “Robbie has had a presence at the Quincy Fire Department for over 40 years and I have had the pleasure of knowing and working with him for much of that time. His abilities and commitment to the fire department and to the community has been an exemplary example for everyone in public service. Robbie’s technical abilities coupled with his incredible sense of humor assured those around him of his confidence and knowledge in dealing with the call. No matter what the situation, we would always have the best outcome.“

District Chairman Mike Taborski issued the following statement, “We’ve known for some time about Robbie’s plan to retire in mid-2023. But because he has been such a tremendous asset in so many aspects related to this position for our department, the community and to the other fire departments throughout the county, we had hoped he might change his mind and continue as the chief for a few more years.

“Chief Cassou exemplifies everything a fire department would want in its chief. These special qualities include — but are certainly not limited to — his exceptional leadership and training skills, his vast knowledge and decades of hands-on experience of fire suppression and prevention. He has also saved the district hundreds of thousands of dollars over the years with his ability to secure grants for much needed firefighting equipment. He has also been a leader through his community involvement activities involving both adults and our youth through a variety of our ongoing outreach programs.

“His will be tough shoes to fill but we thought that same thing when we hired him to fill the footprint left by former Chief Anderson. Again, we are glad to have what we believe is ample time to search for and vet the applicants. We plan to have our next chief in place in plenty of time to work through a smooth transition.”

Anyone interested in applying for the position is encouraged to send a resume and application (available online at qfd.ca.gov under job opportunities) to Quincy Fire Protection District, 505 Lawrence St. Quincy, CA 95971 or email to the department’s Administrative Secretary Karrie White at [email protected]. Deadline for entries is Feb. 15, 2023.