A brief downpour didn’t dampen the enthusiasm of organizers or participants at the first Quincy Firewise community meeting Tuesday, April 14.

With 90 non-renewal notices for homeowners’ insurance policies coming across his desk in a single day, it’s beyond time to organize Quincy residents into becoming a Firewise community, according to Mike Flanigan, co-chair of Quincy Firewise.

The kickoff meeting drew 21 residents to the Rotary picnic area at Pioneer Park. Next month’s meeting will be held Tuesday, May 11, at 4 p.m. 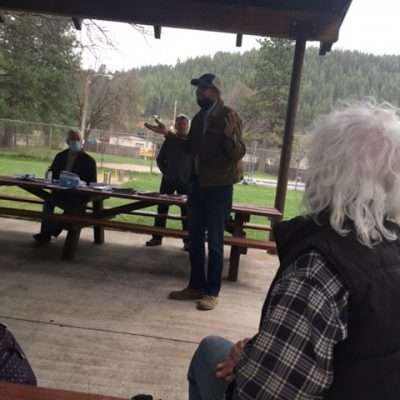 With 24 firewise groups already formed throughout Plumas County, why has it taken so long for the county seat to respond?

Preparing an action plan that eventually allowed for public involvement has been a major process, explained one of the organizers, Ryan Tompkins, forest and natural resource advisor for the University of California Cooperative Extension and a Quincy resident. That action plan took organizers approximately a year to develop, Tompkins explained.

Firewise plans aren’t one-size fits all. Each community is different. And within those communities areas vary. For instance, residential areas along LaPorte Road are different from those in American Valley, or along Chandler Road.

But as it became the Quincy area’s turn to organize Firewise, it was Sue McCourt, formerly Plumas County’s fire officer, who game Tompkins an idea about who the area’s organizers might be, he explained. Get the two leading insurance representatives involved, McCourt recommended.

Tompkins said he followed up on that idea and Richard Stockton of State Farm Insurance, and Flanigan of Flanigan-Leavitt Insurance were on board. Most Firewise groups in the area are the result of members of fire departments and related efforts.

A fourth organizer is Plumas County Planning Director Tracey Ferguson. “We do have an action plan for 2021-2023,” she told the group.

This group is closely associated with the Plumas Fire Safe Council, local Office of Emergency Services, and Plumas National Forest. CalFire and other agencies also lend their expertise.

Right along with learning what steps are necessary in making a home and property more fire resilient, people are being asked to record their time and investments.

“Investing the equivalent of one volunteer hour, valued at $27.34, per residential dwelling unit within the site’s boundary in annual wildfire risk reduction efforts is a requirement of the national recognition program’s criteria for maintaining an ‘In Good Standing’ status,” according to the information from the National Firewise Protection Association.

To be recognized by the national program, Tompkins explained Quincy Firewise must show an investment of participants and records showing the amount of work being conducted. Once agency goals are realized, Quincy Firewise becomes known as a Firewise USA program.

At that website, participants are asked to record hours worked on a home, in landscaping, common area for a homeowner association, and others areas. Money spent includes chipper costs, other equipment, contractor costs, home improvement costs, landscaping and miscellaneous.

While there are brief mentions of what is acceptable under each category, there is an expanded description on the same website.

What’s also especially important at this early stage is people coming together and working together, according to Tompkins.

Flanigan explained that Quincy Firewise is on the verge of meeting some of its obligations. But he wants to see everyone involved in the process.  Only 40 participants don’t “qualify us in my mind and in my heart,” he said about the need for involvement. The Quincy area has somewhere in the neighborhood of a population of 5,000 with more than 2,000 homes to cover.

“We don’t want to see another Paradise here,” said Stockton. He was referring to the Camp Fire that killed 85 people and devastated several communities including Paradise in 2018.

In efforts to make the Quincy area as fire resilient as possible, and put it on the Firewise USA map, organizers of Quincy Firewise point to the need of preparedness.

Just last year, in 2020 California had its largest wildfire season in the state’s modern history. More than 4.2 million acres were destroyed. Plumas County didn’t miss being included in those statistics, as the Claremont Fire burned right up and onto LaPorte Road residents’ property. The Bear Fire also made the area vulnerable and destroyed both natural resources and private lands.

Tompkins encourages people to share before and after photos with Quincy Firewise. He encourages people to make sure they’re wearing the proper safety gear when operating chainsaws, chippers and other equipment. He said that it’s important to show that residents have safety in mind while they work.