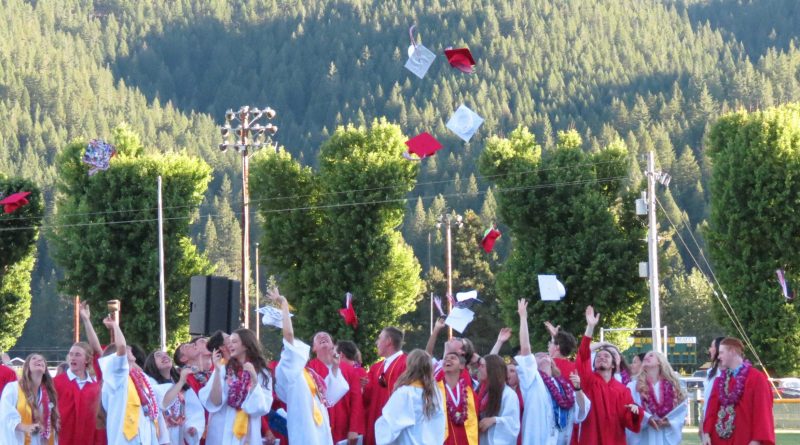 The graduates are all smiles as they toss their caps in the air and celebrate at the close of their ceremony. Photo by Debra Moore
News
June 11, 2022June 16, 2022 Editor

The Quincy High School Class of 2022 survived wildfires and a pandemic, but rather than look back with regret during their graduation ceremony June 10, they celebrated the circumstances they survived and the good times they shared. That sentiment was summed up in their theme: “How lucky we are to have something that makes saying goodbye so hard.”

And there were a lot of goodbyes to be said. As the 48 graduates walked between rows of family and friends, Registrar Janet Radtke introduced them and read their statements of thanks, their plans for the future and their favorite memories. While some are staying in Quincy to attend Feather River College, others are headed elsewhere in California, with some going out of state, and one even to study abroad.

Natalie Davis and Olivia Chaffin, the senior class president and vice president, served as mistresses of ceremonies to welcome their fellow graduates and attendees.

Classmate Millie Newlove sang the National Anthem and later in the evening performed an original song that she wrote for her class: “Say You’ll Remember,” a fitting tribute to the ceremony’s theme.

Davis, the evening’s first speaker, touched on the resilience of her classmates. “We not only made it through a pandemic which included doing school fully online, but lengthy senior projects, countless assignments, wildfires, snow days, seven principals, and even through Mr. Hawkins’ English class,” she said. “So I congratulate the Class of 2022 for defeating every obstacle you came across.”

Davis mentioned many favorite class memories before looking forward. “This place and the memories that we made here, shaped us into the people we are today. My advice for each one of you is to go out and pursue your dreams no matter how big or small, yet never forget where you came from.”

Following the speech by Davis, Principal Jennifer Scheel named those who had received cords for their academic excellence. (Recipients will be noted in the class list below.)

Salutatorian Malachite Nelson was the next to take the microphone, and acknowledged that he struggled to write a five-minute speech that could encapsulate all that he and his classmates have experienced in the roughly “18 years they have been alive.”

After referring to shared memories he said, “I have a feeling that some of us are going to feel lost, confused and anxious these next years, just like the first weeks when we the joined the Quincy High School campus in seventh grade…Much like we adapted to the high school campus, I believe that we will adapt to the new places our adventures takes us. We will encounter ups and downs, but with each challenge we face, we will walk away stronger and more resilient than before.”

Valedictoria Kayla Thackeray began by reminiscing briefly about elementary school and one particular class assignment. “The assignment where our teacher would ask us ‘what do you want to be when you grow up.’” Thackeray said she didn’t like that question. “I don’t like it all. The thing is it is not what we want to be, but it is who we want to be…As a human being what will we value? What type of person do we want to be? This is a much harder answer to come up with because who we want to be is what defines us.”

Thackeray  said that who she wants to be has been impacted by the people around her including her classmates. She named several and shared what she learned from them — some funny, some serious. “Life is scary and I am unsure about a lot of things, but when I start to realize how much I have learned and know because of the people I have been lucky enough to call not only my classmates and peers, but some of my closest friends and favorite people, the future becomes a lot less scary.”

After thanking teachers and staff, Thackeray said, “There is one final life lesson I would like to share and it’s one that the class of 2022 as a whole has taught me and it’s to see the good in every situation. Despite the fires, despite the pandemic, despite the constant change in administration, despite not having a normal school year since our freshman year — We still choose to find joy through these devastating and disruptive challenges. We understand that happiness is not handed to you on a silver platter. You have to choose to find joy and good even through all of life’s challenges and our class did that.”

The class chose Rob Wade, the school district’s outdoor education coordinator, to be their guest speaker and he spoke to them from his heart, without a script. Wade recalled working with the graduates throughout their school years, including the sixth-grade Plumas to Pacific trip. This year he went on their senior trip and drew upon some fresh interactions.

“One of the privileges of being on your senior trip is seeing who you’ve become,” he said. Wade described some of the beauty of the area and said, “Nature only makes originals and you’re all originals. You are an original person in an original place.” He encouraged them to take that originality out into the world.

Wade also talked about genius, the origin of the word and its relation to Genesis and genie. He told the graduates “You are the genie in the bottle … you can uncork your own genius.” Then he reminded them that they have more than three wishes.

He closed his remarks with a quote from a Mary Oliver poem: “Tell me, what is it you plan to do with your one wild and precious life?”

At the close of his remarks, it was time for the graduates to take that first step as they walked across the stage to accept their diploma from school board members JoDee Read and Leslie Edlund.

The ceremony concluded with the traditional changing of the tassel and a cap toss.