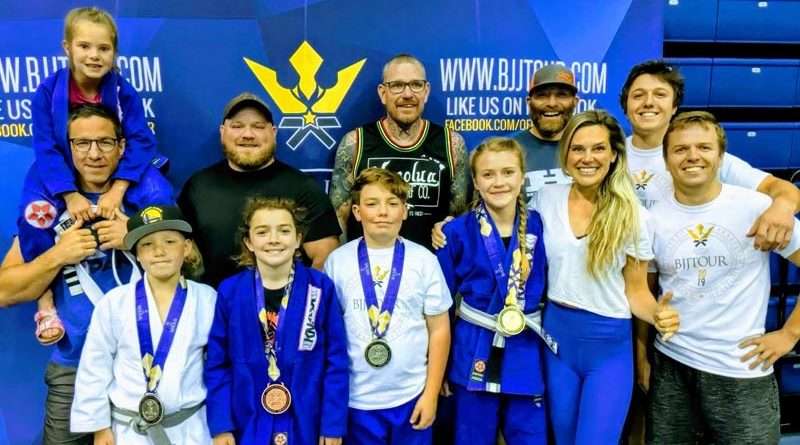 “All teammates did a fantastic job and really shined for our small little town,” said head instructor Nick Maez. “These tournaments are not easy and to step on the mat with thousands watching is a task in its own!”

Professor Nick Maez and Coach Cody Clayton are examples during training and competitions of quality leadership skills. The passion they have for encouraging youngsters to excel in life and through athletic dedication is evident.

Of the 15 competitors that went to compete at the tournament in Davis, 12 brought home medals. Maez said, “Such a amazing accomplishment for our small town gym in such a big sport with top competitors.”

Maez is a first degree Black Belt from Colorado now living in Quincy. He began his own grappling career at the age of five with peewee wrestling and continued through school, eventually placing at state and national levels.

Brazilian jiu jitsu training for Maez began in 2006 while working on his master’s degree in clinical social work at the University of Denver. Maez earned a BJJ black belt in 2012. Since that time he has competed in tournaments around the country and competitions across the world. Maez took home the bronze medal from the 2015 IBJJF Pan American games in the Black Belt Division. Other titles held by Maez are NAGA Vegas Gi Champion, Grand Prix Super Fight Champion and Fight to Win Pro Competitor: Undefeated.

A Quincy local since 2001, Coach Cody Clayton started wrestling in 1986 and received a college scholarship from Western State College in the fall of 1993. After a successful college career he received his BA in Kinesiology with a K-12 teaching emphasis. Clayton is highly skilled in mentorship experience. He has instructed young adults in the areas of whitewater kayaking, rock climbing, mountain biking and various other outdoor pursuits.

Years of developing various youth programs in Quincy have led him to his current occupation as a Career Technical Educator at Quincy High School where he is also the head wrestling coach.

First exposed to Brazilian jiu jitsu in 2014, Clayton said, “I instantly found a love and value for the activity,” and has the distinction of becoming Quincy’s first purple belt in BJJ.