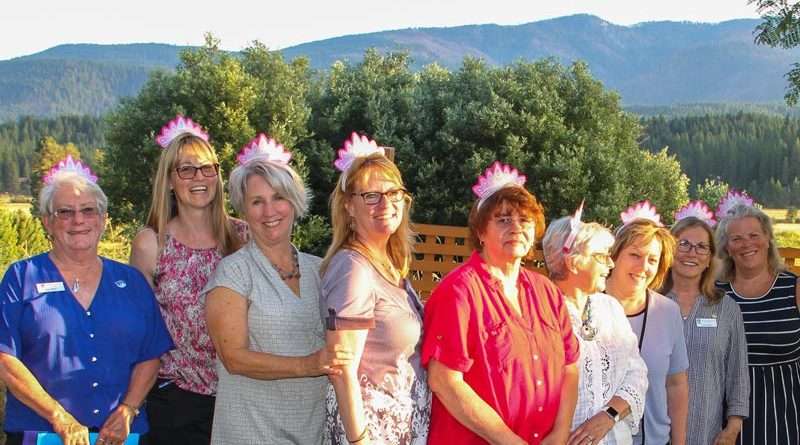 Members of the Soroptimist International of Quincy celebrated their 78th year of community service July 25 in American Valley with a “birthday” party that simultaneously inducted this year’s new officers and roasted  them for a variety of humorous transgressions, such as missing a club event for the birth of a new grandbaby.

Kathy Price outdid herself with standup comedy in her role as leader of the social committee, roasting the leadership in fine fashion as laughter rippled through the audience.

Outgoing three-term SIQ President Kris Miravalle, the one with the new granddaughter, Fiona, was fined in dollar bills for things like making the font on the weekly agenda meetings too small and forgetting to turn off the portable microphone P.A. system so the battery was dead when the next team needed the equipment.

With big smiles, Miravalle thanked her team of approximately 30 members, saying she has been “lucky to have such a dedicated group of women who always pitch in,” and passed the post to incoming SIQ President Totsy Beck.

Pitching in is what service club members do best and the SIQ group is an active philanthropic organization whose members sponsor community events from garden shows and social-justice efforts promoting education for children overseas to the vibrant local Easter Egg Hunt and much more.

They are especially noted for their scholarships that support women’s education, holiday candy sales to support their programs and an annual springtime “Women of Distinction” recognition ceremony that honors outstanding achievements and community service by local women of all ages.

“I look forward to seeing our club grow and having a lot of fun with our projects, like our successful new solstice garden stroll,” Miravalle said, speaking at the festivities held at the home of Terry and Tim Gallagher.

The Soroptimist International of Quincy was chartered in 1941, the first club in Plumas County. SIQ later sponsored the formation of Soroptimist chapters in Greenville and Portola; those groups are no longer active.

Violet Richardson chartered the very first Soroptimist International organization in Oakland in 1921 to “bring about change in the lives of women and girls worldwide.” There are 1,300 chapters today working to carry out community work and promote the success of women and girls in education and business. New members are always welcome.