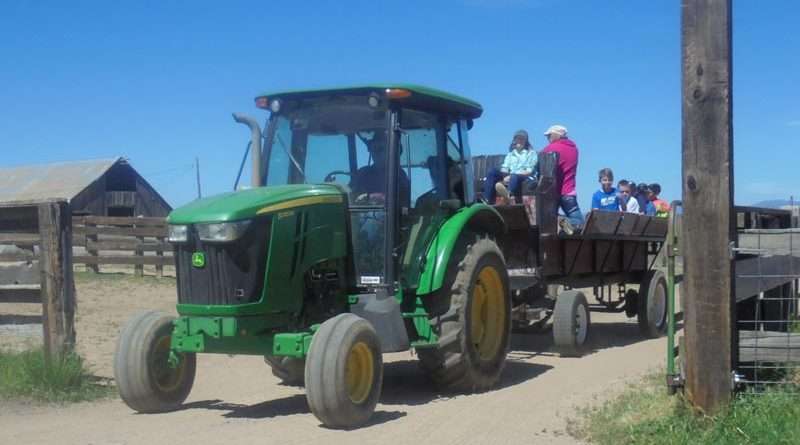 In the afternoon, 24 members from Ms. Folchi’s third-grade class, along with 36 fourth-graders from the classes of Ms. Haug and Ms. Armstrong, all from Loyalton Elementary School, were greeted by Plumas Sierra Cattlemen. They were eager to begin the Ranch Day Experience.

After dividing into five groups, they rotated between five farming stations. Ranch owner Dave Goss with the help of Cinnamon LaFeaver and daughter Karlie drove the hay wagon with his tractor out into the fields as areas of interest and history were pointed out.New baby calves were among the sights.

Another area contained Doris Goss with her sheep and dogs. Explaining about the care of a lamb from its beginning to adulthood was followed by a demonstration of a working sheep dog.

Helen Roberti held the attention of the students with information about the care of calves from their birth to maturity. Then the students each received a newly branded piece of wood at the brand identification station.

Mr. Knight and Max Forrest were in charge of the hot branding irons. Along the back fence three poster-type bulletin boards were hung where Kathy Knight and Karka Pombo informed the listening students about the many by-products gotten from a cow. (Did you know that the NFL uses 3,000 hides in a season for their footballs?)

As students answered questions about the many by-products, they got a marshmallow, which has components made from a cow.

The last station was where the wondrous mysteries of the egg-producing process in a hen were explained by Laural Colberg.

All in all it was a very successful and educational day. The Plumas-Sierra Cattlewomen seek to “instill in the coming generation the love of the land and of life, the humility and awe before nature and the hope and faith in the future.” This is a direct quote from the Cattlewomen’s Creed.