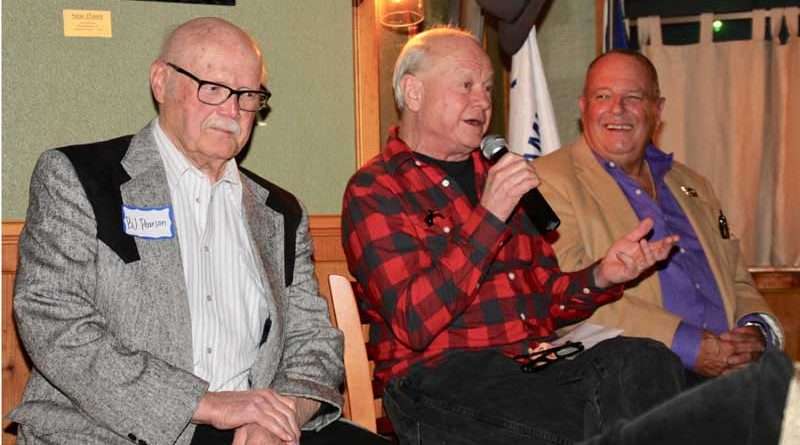 Plumas County Realtors, from left, BJ Pearson, Randy Barlow and Dennis Mason recount stories from their days traveling together as state directors during a tribute held in their honor last month. All three received honors from the National Association of Realtors for their 40-plus years in business and service to the industry. Photos submitted
News
December 19, 2017December 13, 2017 Staff

This year, BJ Pearson, Dennis Mason and Randy Barlow each received the prestigious Realtor Emeritus award given by the National Association of Realtors for their 40-plus years of membership and service. The honorees — all three of whom continue to work as busy Realtors — took the stage to reflect on their careers and answer questions from their colleagues.

The trio told entertaining stories of flying together to meetings throughout the state in Pearson’s twin-engine plane during the early 1980s when they served concurrently as state and regional directors in the California Association of Realtors.

Pearson’s career in real estate dates back 48 years. During his first year he recalled selling a 20,000-acre ranch property in Oregon in a transaction that was carried out on just one single piece of paper!

In 1971 he opened his own firm, Pearson Realty in Portola, where he continues as broker. He was a leader on the local and state association level for about 10 years starting in the early 1980s.

In addition to being a Realtor, Pearson has served as a Plumas County supervisor and a Portola city councilman. He has been a supporter of dozens of community projects, and for several years delivered meals twice a week to homebound seniors.

Pearson continues to be outspoken on local political issues and encouraged his fellow realtors to use their influence to affect public policy.

Dennis Mason became a Realtor 45 years ago and has worked in various Lake Almanor brokerages since 1972. He currently works for Coldwell Banker Kehr/O’Brien’s Lake Almanor office.

Mason has an impressive record of leadership at the state and national level, working primarily in the areas of governmental affairs and land use. He is the Plumas Association’s longest running board member, serving as director nearly continuously from 1981 to present.

In 2014, he was inducted into the National Association of Realtors’ Hall of Fame for his contributions to Realtor Action Fund, which works to protect home ownership and property investment in all levels of government.

When asked what advice he has for new Realtors, Mason replied, “Get involved.”

Quincy native Randy Barlow has been working in real estate for 43 years, starting out in 1974 at the age of 22 working for his Realtor aunt, Lorraine Barlow. He has managed the Coldwell Banker/Pioneer Real Estate office in Quincy since 1995.

Starting in the 1980s, he served on the PAR board of directors for over a decade, as well as state and regional director. Throughout the years, Barlow also served on Quincy Rotary’s board and was Fair Parade chairman. Barlow recalled making 32 trips to meetings in those days, to as far north as Weed and as far south as San Diego — most of those trips with his fellow emeritus honorees. He shared humorous tales from those travels to the delight of the installation dinner guests.

Also honored that night for 40-plus years of service to the local real estate industry were David Windle and John Seibel from the Quincy branch of Cal Sierra Title Company, which has maintained an affiliate membership with the PAR since 1977. The company has four offices serving both Plumas and Lassen counties.

Windle started at Cal Sierra Title right out of high school in 1973. He began as a title searcher, worked his way up into an escrow position and eventually purchased the company in 1998. Windle has served as president of the California Land Title Association and is a member of the United Trustees Association. He also is deputy fire chief for the Quincy Fire Department and is a supporter of numerous local functions and charities.

John Seibel started at Cal Sierra Title Company in 1975 and like Windle, continues to work full-time as a title officer to complete home and property sales throughout the county. He is considered one of the most experienced title officers in Northern California.

Earlier that night, Juli Thompson of Dickson Realty in Portola was sworn in as the incoming 2018 PAR President. Thompson began her career in real estate sales in St. Helens, Oregon. She continued in the industry, serving various capacities from office assistant to land development consulting.

After moving to Plumas County in 1994, she returned to real estate sales and joined PAR in 1999. She began work as a full-time Realtor in 2013 and has been a PAR director since 2014, serves on three committees and previously was the board treasurer and vice-president.

“Be careful not to miss a meeting,” Thompson joked, explaining it was during an absence that she was nominated for a leadership position on the board. She said she’s looking forward to finding innovative ways to help members be more successful, along with reaching out to the future generation of board leaders.

“I’d like to see younger people entering the profession and getting involved,” Thompson said. “I think they will add new energy and inspiration [to the Association].” She added that with the improvements in internet in Plumas County, she’d like to see the association offer and encourage members to incorporate new technologies in their professions.

Directors who will continue their terms next year are Cathy Kuersten — elected as treasurer —  and Dennis Mason, both of Coldwell Banker Kehr/O’Brien; Carol Yeater of Sierra Destination Realty in Clio; Jan Fletcher of Quincy Real Estate and Property Management; and Jeanne Dansby of Dickson Realty, who will serve a second term as vice-president.

A silent auction followed by a fast-paced live auction concluded the evening, with donations ranging from artwork, jewelry and wine baskets, coming from Realtors and homeowners. Proceeds from the auctions go toward the Association’s scholarship fund, which supports area college-bound youth.