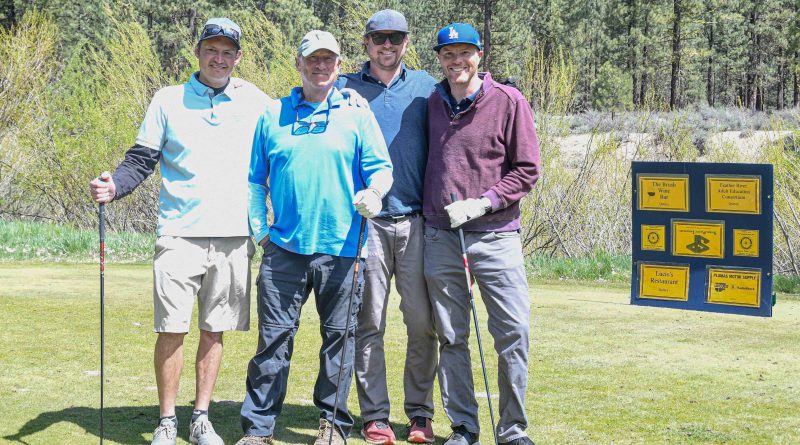 After a two-year Covid-induced hiatus, it was obvious that players were ready to return to the fairways and enjoy a fun-filled day in tournament play as evidenced by a record turnout of 152 golfers for Quincy Rotary Club’s 19th annual Clay Dyrr Memorial Golf Tournament held Saturday, May 7, at the Plumas Pines Golf Resort in Blairsden.

This tournament enjoys the reputation of not only being competitive for the serious golfers, but fun for the higher handicappers as well and this year was no exception.

The scramble format also features lots of contests and prizes on many of the holes — including a chance to win a $25,000 Polaris Ranger as well as two $5,000 cash prizes for acing one of the par-3 holes — which makes for an entertaining and fun day for all levels of players.

Taking first place with an impressive (albeit Mulligan assisted) score of 14-under par 58 was team Johnny Mansell, Jon Dvorak, Eddie Mutch and Marcus Tracy. They each received a $50 gift certificate and a round of golf for four redeemable at Plumas Pines — a prize valued at over $1,700.

Team Buus each received a $50 gift certificate and round of golf at Plumas Pines for their efforts — a prize package worth $600.

With Mulligans (extra shots) available to purchase as part of Rotary’s effort with this tournament to raise funds for their community service projects and youth programs, many of the teams participating posted scores that were well under par, but not all the teams.

Even with the extra shots, one team was destined to finish in last place posting the highest score on the day. That foursome, clearly there to enjoy a day of golf without worrying about their score (88) was Joe and Elaine Azevedo and Dave Wright and Cindy Marks. So, to better hone their golfing skills and in keeping with the spirit of a fun-filled day, they received a team golf lesson from one of the course’s PGA golf instructors.

Men and women’s longest-drive winners were Craig Kusener and Cristi Allen. Each won a $25 gift certificate to the pro shop that was sponsored by Wild Hare Sign Co. of Quincy.

Sierra Pacific Industries in Quincy sponsored the $25 gift certificates for the closest-to-the-hole contest won this year by Perry Bertocchi.

The $25 gift certificate for the closest-to-the-rope contest, sponsored by The Breaux Group, was Zach Wood. There were no lady winners for either of these two prizes this year.

Another highlight of the tournament is the drawing for $400 in cash sponsored by tournament co-directors Mike and Keri Taborski and Johnny and Hannah Mansell. Perry Bertocchi, Bob Reinitz, John Kuipers and Kory Felker each won a crisp $100 bill.

Up for grabs was a 2022 Polaris Ranger valued at $22,000 offered by DuPont Power Tools and State Farm Insurance in Quincy and two separate $5,000 cash prizes courtesy of Plumas Bank, Edward Jones Investment, Flanigan-Leavitt Insurance and Les Schwab Tires in Quincy and a $500 gift card sponsored by the club. Golfers collectively had 600 chances throughout the day to get an “ace” on one of the four par three holes to win the hole-in-one prizes. Unfortunately, all the prizes went unclaimed this year.

Proceeds from the tournament benefit the Quincy Rotary Club’s community service projects and its youth programs and scholarships.

Next year’s tournament is Saturday, May 6, 2023 at Plumas Pines Golf Resort. Entry fee includes golf, range balls, box lunch and appetizers immediately following play prior to the prize raffle and awards ceremony. This past several tournaments have sold out early so if you plan to play you are encouraged to get their registration form, which will go out next February, in as early as possible to save a spot.