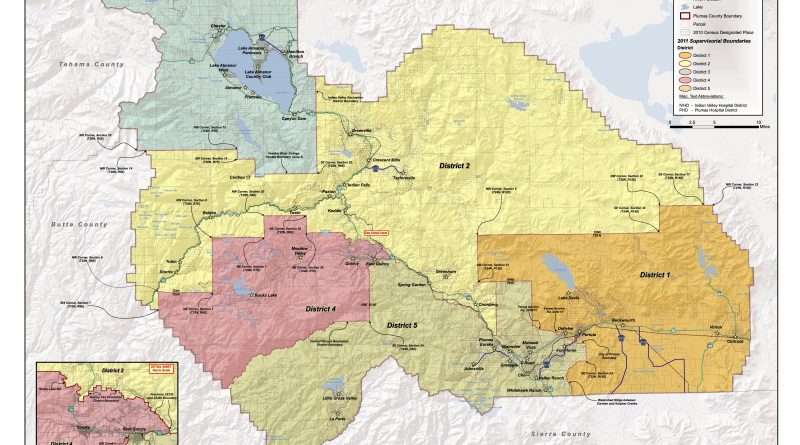 Submitted by the League of Women Voters of Plumas County

Redistricting is the process whereby district lines are redrawn within each state. This includes the U.S. House of Representatives, the State Board of Equalization, the State Senate, the State Assembly, County Boards of Supervisors, City Councils, School Boards, and Special District Boards.

Every ten years, following the census, we redistrict at the County and State level. That means that we draw new lines in order to put the same number of people in each electoral district. Redistricting is designed to ensure that every person has equal representation. The districts are based on total residents, not on voters.

Redistricting matters because district lines determine who represents us in elected office and will influence what happens in our community. Redistricting will determine political representation for the next ten years.

Historically, elected officials have drawn district lines, and were able to design their own territory and choose who votes for them. This time the process will be different because cities and counties are required to engage communities in the redistricting process by holding public hearings and/or workshops and doing public outreach, including to non-English-speaking communities[1].

Plumas County is in the middle of the redistricting process and County residents are encouraged to participate. Plumas County has 5 supervisorial districts and the current population in Districts 1 – 5 is the following (population changes as a result of recent fires are not incorporated into these numbers – this is based on the 2020 census):

County residents can provide information about their communities of interest and/or submit district maps.

A community of interest can be a neighborhood, network, or group of people who have common interests in the community and would benefit from being grouped into a single district. Keeping communities of interest together is an important principle in redistricting.

Other factors considered in redistricting are that each supervisorial district should share a common border with the next, have easily identifiable boundaries that follow natural or artificial barriers (rivers, streets, highways, rail lines, etc.), and lines should be drawn to encourage geographic compactness to the extent practical. In addition, boundaries may not be discriminatory.

The County held an initial redistricting workshop occurred on Sept. 18 during which the legal process for redistricting was described.  https://www.plumascounty.us/2781/Redistricting-2021.

The ideal population for each of Supervisorial Districts 1 – 5 is 3,968 people per district, and the redistricting process should result in the number of people in each district as close to 3,968 as possible. The change in population in Districts 1 – 5 over the last 10 years is the following:

A map of current Plumas County Supervisorial Districts 1 – 5 can be found at:

Draft maps for new supervisorial districts will be presented at a second public hearing on November 2nd at 1 pm in the Board of Supervisors’ Chambers, 520 Main St., Room 308, Quincy, CA. The community is encouraged to submit draft maps using the online mapping tool and to provide public comment at the hearing.

The draft maps will be discussed at a third public hearing to be held on November 23rd at 1 pm in the Board of Supervisors’ Chambers, 520 Main St., Room 308, Quincy, CA.

The meetings will also be available via zoom. A complete schedule of the meetings is available online at https://www.plumascounty.us/2922/Schedule

The Community can submit draft maps and provide public comment until the maps are finalized. The Board of Supervisors intends to finalize the new district maps by December 7th.

To learn more about the redistricting process and ways to get involved, visit https://www.plumascounty.us/2781/Redistricting-2021.

[1] This is based on Assembly Bill 849 (2019), The Fair and Inclusive Redistricting for Municipalities and Political Subdivisions (FAIR MAPS) Act.