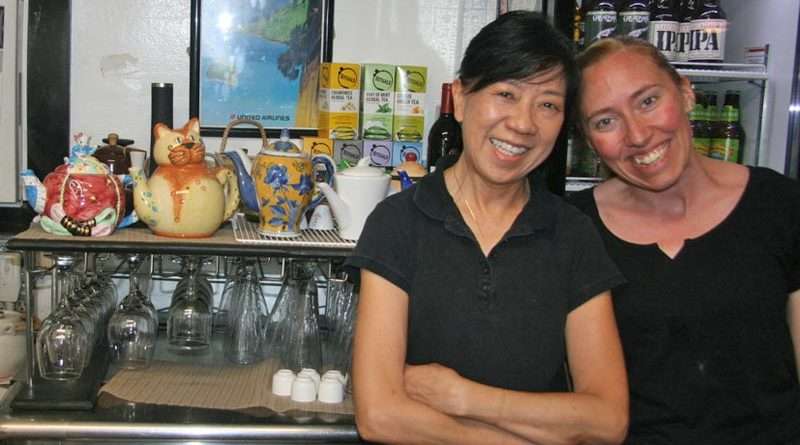 When Jim and Ling Eck decided to open up a new restaurant in East Quincy, they embarked on a massive remodeling effort that preceded the opening of Cedarling. Jim designed and built the counter. He also took advantage of some leftover tile from a contractor along with advice, and tiled the half wall between the serving area and the kitchen that contained the order window.

Ling’s father, Gary, fell in love with a spray gun; he was amazed at the progress he was making until they all discovered the fine mist of escaped spray and spent some time cleaning up. The final result was a fresh new interior and the place was finally opened featuring Asian-Fusion cuisine alongside American favorites.

All the food is fresh, prepared daily and has evoked a positive response from customers who come from all over. Ling oversees the food preparation and contributes to the menu from her heritage of Taiwanese cooking and her dining experiences while flying around the world as a flight attendant with a major airline.

Customers can order from a variety of burgers, bacon and eggs, steak, meatloaf or a beef bulgogi rice bowl, and on Friday Night — prime rib. The bulgogi comes with a dish of Korean fermented cabbage (kimchi) and can be ordered with different levels of heat. The term fusion as it relates to cuisine, refers to a combination of different cooking styles that create a single dish.

Ling’s mother, Snow Jade, does much of the food prep, which involves chopping a combination of vegetables and creating the sauces for various dishes. Her father Gary can be seen almost every day doing jobs from small repairs to preparing pot sticker dumplings. Ling manages and oversees the cooking and serving.

The name Cedarling comes from the Chinese character meaning pine or conifer that goes with the exterior of the restaurant, and the name of the owner — Ling. The family team has created a successful, local dining experience.