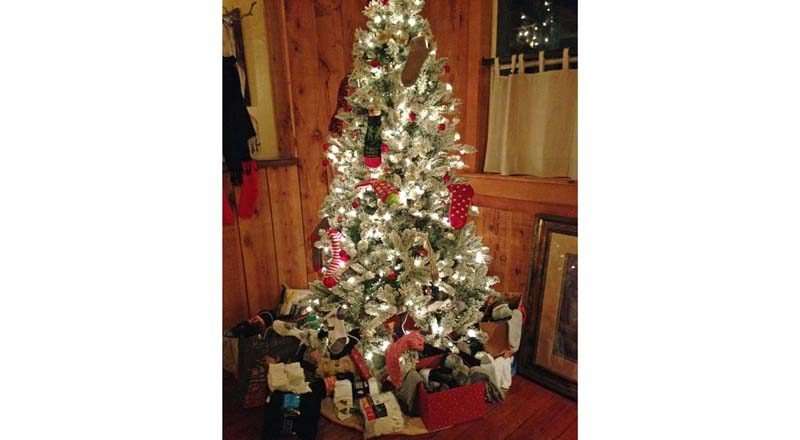 Socks adorn the Christmas tree at the Grizzly Grill and are stacked underneath as well. In all, 225 pairs were collected and will be distributed through the Plumas Crisis Intervention and Resource Center. Photo by Debra Moore
News
January 6, 2017January 3, 2017 Debra Moore, Managing Editor

Last month Grizzly Grill diners brought more than their appetites to the restaurant — they brought socks — lots of socks.

At last count there were 225 pairs collected, which will soon be distributed to communities throughout the county.

I’m totally overwhelmed,” said Randi Collier, co-owner of the Grizzly Grill. “I can’t believe how many people brought in socks.”

She said it became a challenge for groups such as the Portola Rotary Club, Plumas Sierra Rural Electric, River Pines Resort, Valley Ranch residents, and more as they competed for who could bring in the most socks when they came in for their annual Christmas dinners.

It all started with a member of the Gooding High School Class of 1981, Keri Moline Merritt, who had been a classmate of Collier’s back in Idaho.

Merritt is fighting Stage 4 lung cancer, but that hasn’t stopped her from thinking of others.

“Socks are the least donated item at shelters,” she wrote on a Facebook post shared with her classmates. “I’ve decided that for Christmas this year I want to donate a thousand pairs. It’s going to be a challenge, but I feel up for it and I hope you do too!”

The socks collected at the Grizzly Grill were scheduled to be taken to the Plumas Crisis Intervention and Resource Center in Quincy this week and then distributed throughout the county.