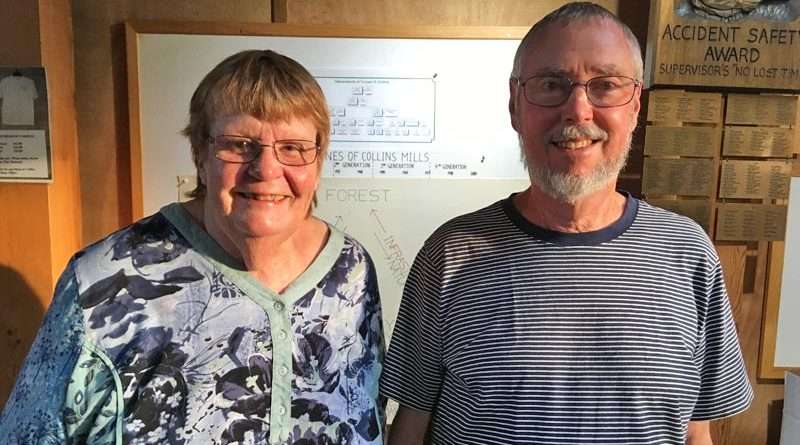 Marilyn Quadrio, left, and Terry Collins are two folks that are a wealth of historical information regarding the origins of the Chester/Lake Almanor area and the Collins Pine Company that has been very instrumental in the growth of the community. Their joint historical presentation June 13 gave a whole new perspective about the community to many attending. Humorous stories, surprising facts, along with a historical timeline made for a very interesting evening. Photo by Gregg Scott
News
July 3, 2019July 10, 2019 Gregg Scott, Staff Writer

The Chester/Lake Almanor area is very fortunate to have several residents that have not only lived through much of the history of our communities, but on many occasions helped shape it.

Even more fortunate is the fact that they are willing to share that rich heritage with anyone that wants to know how Chester and the surrounding area developed into what many now call home.

It seems that the origin of Chester was due in part to the existence of the Red River Lumber Company and its “company” regulated town of Westwood.

The rules and regulations that went along with living in a company town were not what some employees were looking for in their lives.

The alternative was to locate across the county line, but still close enough to commute to the mill for work.

As a result, the Big Springs area that was mostly summer cabins before, started to develop into more of a community.

It was related that this increased growth, along with some of the colorful local personalities, in the Chester area, as it became known, soon gained a reputation as a pretty wild and wooly locale up through the 1930s and early ’40s.

With all the cattle ranches in the area there was a long-time tradition of a local rodeo and the accompanying revelry.

With the advent of World War II even somewhat remote locales like Plumas County were affected by events like conscription, rationing and troops being posted in surrounding areas to protect hydroelectric facilities.

The war along with a growing population had somewhat of a sobering effect on the culture of most communities.

Quadrio related several war-related county policies that were somewhat questionable at the time like banning trick-or-treating costumes for fear that Japanese saboteurs might infiltrate the community.

Attendees were provided with a very interesting 20-plus-page timeline of events that occurred in the decade 1940 to 1950.

Of course many of the events in that period had to do with the building and expansion of the Collins Pine mill and the influence the military demand for lumber had on the timber industry and the community.

Even though the mill was built in 1943, the Collins family history goes all the way back to the turn of the century.

Terry Collins explained that when his father, Truman Collins, decided to build the mill here in Chester it not only helped fill some of the increased demand for lumber brought on by the war, it also provided good paying jobs for an area that was being stressed by the war effort, and probably as important, a new forest management philosophy that ultimately would have a stabilizing effect on the community.

Collins also offered some family timeline charts that reflect the longstanding commitment of the family and the company to the community.

The Collins Museum lobby was full and overflowing with longtime residents and newcomers that want to know more about the rich history of the area.

Stop by the Chester Museum and chat with Marilyn Quadrio or check out the Collins Museum for a fine historical display.

Leonard Mickiewick, who wrecked his car on his way to Chester, was arrested early Sunday morning by a traffic officer and charged with reckless driving.

Mickiewick, it is stated, was on his way to Chester Saturday night, when he ran his car into a state-owned road roller. Abandoning his own car, he climbed aboard the road roller and continued merrily on his way to the Chester celebration, where he encountered a traffic officer, who arrested him and charged him with reckless driving.

Headlines from the March 27, 1902, issue of the Feather River Bulletin

“The deeds have been filed for record by which the 60,000 acres passes into the hands of T.D. Collins and J.G. Curtis, millionaire lumber men of Pennsylvania.”