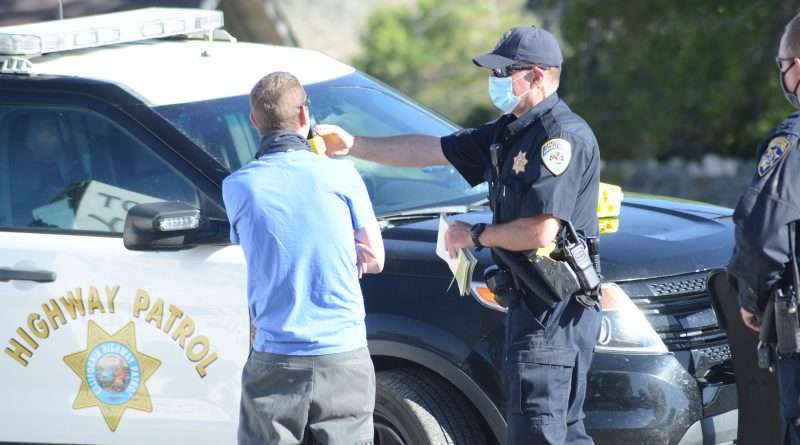 One California Highway Patrol Officer readily admits he doesn’t follow the news, but he was making it when he accepted a voluntary second shift for the July Fourth weekend and a ride-a-long with a reporter.

Randy Thompson was part of a July Fourth special grant program designed to help keep drivers who were under the influence of alcohol and/or narcotics off Plumas County’s highways. Thompson’s second shift began in the afternoon of Saturday, July 4, he explained as he ran through the required steps to gearing up the CHP unit he’d just climbed out of. A regular shift runs more than 10 hours. His overtime shift would run from 2:30 to 8 p.m.: a long day.

The holiday enforcement period was from July 3 through July 5. Through the weekend the state recorded 19 deaths and more than 600 arrests for DUI, according to the CHP’s Maximum Enforcement Period.

As a seasoned CHP officer, checking his radar and setting up his unit’s computer are just second nature to him. He’s been on the force for 14 years and spent the last five in Eastern Plumas County.

Thompson explained that Friday, July 3, was relatively quiet for the beginning of a holiday weekend. He’d made seven stops and none of them led to a DUI arrest. Moving violations, mostly for speed, were the nature of the stops.

Actually, throughout the Quincy Area CHP’s jurisdiction, which excludes the Chester/Lake Almanor Basin, things were relatively quiet. There was one fatality reported near Frenchman Lake, but Thompson wasn’t involved in that call. A Nevada resident was killed when the Utility Terrain Vehicle he was driving hit a tree.

Actually Thompson’s biggest headache occurred the day before when he stopped a Portola driver near the Gulling Street Bridge for a driving infraction.

And as Thompson began his second shift that would end at 8 p.m. it looked like July 4 was shaping up just like the previous one in some respects. “It is the nature of the job that every day is different,” he explained.

That was especially true when Thompson graduated the CHP academy and was hired by the Los Angeles division. One day in that jurisdiction was more active than an entire week or even month in Plumas.

From Los Angeles, Thompson said that he moved his wife, Laura, and his growing family of boys, to the Sacramento area. And eventually he was able to transfer to Plumas County. “It’s similar to where I grew up,” Thompson said and he wanted that for his four sons and baby daughter.

Thompson watched the traffic and talked about his career as he made his first stop of his second shift at the Sierra Christian Church in Beckwourth.

It wasn’t long before Thompson spotted a black SUV speeding. According to the radar in the unit, that driver was going 69 in a 55 mph area. “He noticed us because he’s already slowing down,” he explained.

And it wasn’t long before the driver pulled over to a safe spot along Highway 70 to stop. Thompson got out of the unit and approached the SUV from the passenger side, which is safer for the officer. When Thompson returned to the unit after checking the man’s information, he said the driver said they were just returning home following surgery.

The CHP is about keeping highways safe for everyone, Thompson explained. While he could have given the man a ticket for speeding, Thompson said that the driver knew he was speeding and said he would correct his driving. The officer let the man off with a warning.

According to complaints from some Beckwourth residents, speed is an issue as drivers blast through the 55 mph.

“We’ve got to log everything,” Thompson said as he settled himself in the unit and began typing into the computer system.

As Thompson continued with his work he explained that he broke with family tradition in going with the CHP. In his family there are generations of men joining the Marines. And that was seriously considered when Thompson started considering career choices. Thompson said he knew and liked a particular man in his church that had retired from the CHP. As the man mentored him about the benefits of the career, he finally decided it was right for him too.

It’s not long as Thompson watches the traffic before he spots another driver speeding. This time the white Honda pulls over in front of the Meadow Edge mobile home park. Thompson follows the same procedure he did with the black SUV. When he returns to the unit he explained that it was a couple just taking a drive away from their campsite at Frenchman. This stop also resulted in a warning.

Thompson shared what happened when he approached the Honda. He said the couple was expecting him to approach the driver’s window but that would have placed the officer in line with the traffic. When he approached the passenger side, “It was like I appeared out of nothing,” he said with a laugh.

“I try to be fair at each individual stopping,” Thompson explained again. “Our job is safety on the road.” And he’s always looking for a “willingness to correct their behaviors,” he said.

Rolling on, Thompson joins a hunt for the driver of a red vehicle that left the Mohawk Tavern. The reporting party was concerned that the driver had too much to drink. Driving through the areas from Blairsden to Graeagle and on to Mohawk, Thompson checked out the holiday people and the cars looking for the reported vehicle and possibly its driver.

But then Thompson got a call over the radio that there was a collision at the corner of Highway 70 and Frenchman Lake Road. CHP officer Jonathan Bruno was taking the call, but Thompson was on his way to assist. At the first call, he didn’t know just what was occurring at that site.

When Thompson arrived on scene, just moments ahead of Bruno, he immediately got out of the unit to see if additional help was needed. It was a case where someone tried to cut in front of another driver causing the front of one pickup to hit another in the rear end.

“I wanted a truck anyway and just couldn’t figure out how to buy a new one,” said the Nevada driver to people who had gathered at the scene. As the two officers followed protocol involving a collision, it became clear that the driver of a white Toyota might be under the influence of alcohol.

As Bruno led the man through a field sobriety test, Thompson observed. And at some point the suspect became aware that he was being photographed. When he complained, Thompson said he told the man that it was a public place and that anyone could take photos that wanted to do so.

Once the man finished his test, Bruno then retrieved his gear from his unit, and prepared to take a Breathalyzer test. Thompson said he didn’t know what the man’s blood alcohol content was, but apparently it was over the legal limit of .08 percent, because Bruno handcuffed the man and then placed him in the front seat of his unit.

With this being done, Thompson went over to the man’s Toyota, which was parked in front of the gas pumps at the local market. He then drove it over to a shady spot. Laughing he said this is the difference between a rookie and a veteran officer — he chooses a shady spot to put the pickup while he does his required search of the vehicle.

During the search, it seemed fairly routine until Thompson opened the back door on the passenger side and recovered four beer cans. One was empty, another was half finished and another was opened and poured out along the side of the roadway.

With Bruno left to deal with the driver, he decided to head back toward the Graeagle area. But that’s when he received notice to drop off his ride-a-long passenger and head for Sierra County — to what, he could only guess.