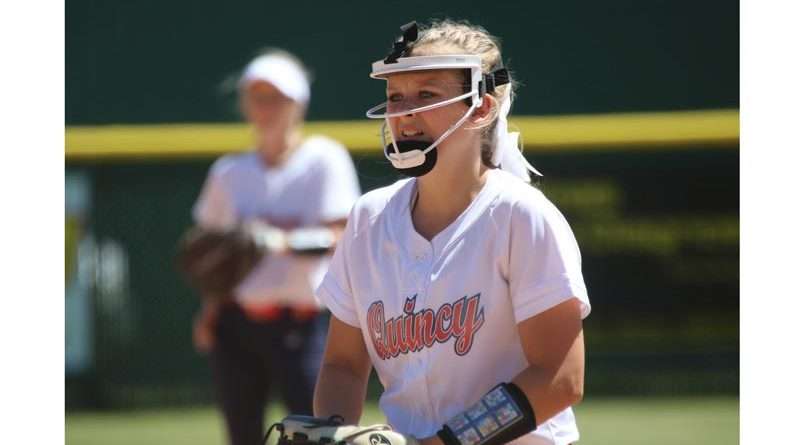 The Tiger and Trojan girls faced each other in the last game of the season May 10 in Portola. It was a landslide victory, 17-0, for the Trojans who are on a mission running toward CIF championships.

The Quincy softball team has an incredible 20-3 overall record with a 6-2 in the league. The two losses in league were to the Biggs Wolverines and the single non-league loss was to Modoc when the Trojans split a doubleheader with the Braves on May 1.

Portola runs into the Trojan wall

The rivalry match was a tough one for the Tigers on May 10. Neither rival scored in the first inning. Quincy scored seven runs in the second inning and one each in the third and fourth innings. The fifth inning really hurt, with eight more Trojan runs to end the shutout game in the bottom of the fifth inning.

Baumgartner hit two home runs and DeMartile hit one. Ray and Cahill both hit a double. DeMartile stole two bases from the Tigers and Ray, Stewart, Baumgartner and QHS pitcher Caitlyn James all stole a base.

James handled pitching for the Trojans in the mighty shutout with eight strikeouts for the 18 batters she faced in the five-inning game. No Tiger stats were available.

Cahill and James pitched for the Trojans, both striking out two batters each. James faced seven batters throwing 26 pitches in two innings and Cahill faced four batters with 15 pitches in one inning.

In the most unusual doubleheader of the season, the Trojans won the first game 5-0 and lost the second game 10-0.

In game one, the Trojans scored one run in the first inning, another in the third and three runs in the fifth inning. The game went until the top of the seventh inning when the Braves remained unable to get a single run on the scoreboard.

Baumgartner served as catcher for QHS pitcher Caitlyn James as she struck out 10 Modoc Braves of 27 faced. James threw 100 pitches in her shutout game.

The Modoc Braves had pitcher Lexee Larranaga at the mound and the mighty freshman struck out nine Trojans of 28 batters faced.

In game two of the doubleheader on the Feather River College diamond May 1, the Braves turned the tide to win 10-0. Modoc scored four runs in the first inning, one in the third, four more in the fourth inning and a final run in the fifth inning.

The Quincy batters again were up against Modoc freshman pitcher Larranaga who only managed to strike out two Trojans of the 19 she faced. The Braves took their win the hard way, one base at a time, with no home runs and no grand slams recorded.

The Quincy girls won both games of a doubleheader when they traveled down the hill to the Spartan diamond April 26.

It was a big game for senior Baylee Ray who scored three runs. The Trojans really spread the glory around with a wide field of talent sprinkled across the entire team.

Morrison served as catcher for pitchers Cahill and James. Cahill struck out eight batters of 23 faced in 3.1 innings and James struck out five of seven batters faced in 1.2 innings.

The second win of the day for the Trojans came with a score of 13-1. Quincy scored three runs to the Spartan single run in the first inning. The QHS girls followed with two runs in the third inning and eight more in the fourth.

This game featured the talents of junior Savannah Gay scoring three runs for Quincy. DeMartile scored two runs as did Morrison and freshman Lexi Baumgartner. Single QHS runs were scored by Wirtz, Ray, Cahill and Stewart. Baumgartner hit two doubles and Stewart hit one. Gay, DeMartile and Morrison all stole a base.

Caitlyn James pitched the five-inning game striking out nine batters of 17 faced. It only took James 61 pitches to finish off the Spartans in the second victory of the day.

What’s next? Northern Section CIF playoffs games were scheduled to take place May 14. Look for Trojan details next week in this, your Sports Section.