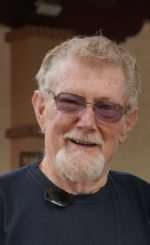 Rolf Blaine Gaudard of Gualala, California, passed away on March 20th, 2021. He was born February 11, 1932 in St. Louis, Missouri to Rolf Gaudard and Edith (Griffel) Gaudard. Rolf grew up in Hot Springs, Arkansas along with his sister Doris and remembered his father playing music at the Arlington Hotel there. Following his parents’ separation, Rolf took various jobs in the area to help support his mother before moving out to San Diego where he joined the Marine Corps in 1947 or 1948 and started out in the Service Squadron. Following discharge, Rolf worked as a Ranch Hand at Tejon Ranch for a few years and in 1953 he married Joan Klein. The two settled in the Bakersfield area and Joan gave birth to Mark and Jane. Eventually Rolf started working for the Southern Pacific Railroad, beginning what would be a lengthy career in the railroad industry.

After July 1959, Rolf moved to Rocklin, where he worked for the Sacramento Northern Railway packing fruit cars before eventually joining the Western Pacific Railroad before it was absorbed into the Union Pacific. While he and Joan would later separate, he took a position in Winnemucca, Nevada where he would be given more seniority. Starting off as a Switchman, Rolf was promoted to Brakeman and eventually Conductor, running trains between Winnemucca and Portola.

In the late 1960s, he met and married Judy (Story), moved to Quincy, and worked on the Feather River Canyon rail lines. In 1967, Rolf was in a motorcycle accident where he ended up with a partially crushed right foot. Later, in 1972, Rolf survived a different accident. This time a caboose explosion near Keddie which would leave him with shrapnel in his leg for the rest of his life. Rolf and Judy had two children, Blaine and Jennifer, however, he and Judy would separate later on.

By the mid-1970s, Rolf began to work the route from Oroville to Bieber where he would meet Lois (Kirby). The two married near Gerlach in the Black Rock Desert where Rolf and his friend Bennett enjoyed driving off road. Lois later gave birth to Rolf Russell (“Rusty”) and by 1986 the family moved to Portola. There, Rolf retired with the Union Pacific. He would go on to serve on the volunteer fire department and the town council.

In 1999, Rolf and Lois separated and in his later years, Rolf found Shirley Arp through a mutual friend as they shared their love of motorcycle riding. The two married in 2000, lived in Pinole for a time, and later bought a house in Gualala along the coast following Shirley’s retirement from Nextel Communication. In his final years, Rolf and Shirley regularly attended Gualala Baptist Church. Throughout his whole life Rolf loved to play the piano and entertained many with his music.

Rolf was preceded in death by his sister Doris and his granddaughter Kathryn. Rolf is survived by his wife Shirley, all five of his children and three stepdaughters, twelve grandchildren, and thirteen great grandchildren.

A memorial service will be held at Gualala Baptist Church on Saturday, March 27th 2021 at 1 p.m. and Rolf’s remains will be interred in the Portola Cemetery. For those unable to attend the memorial service, it will be available for viewing via Facebook Live and YouTube. Please see gualalabaptistchurch.org for the links.