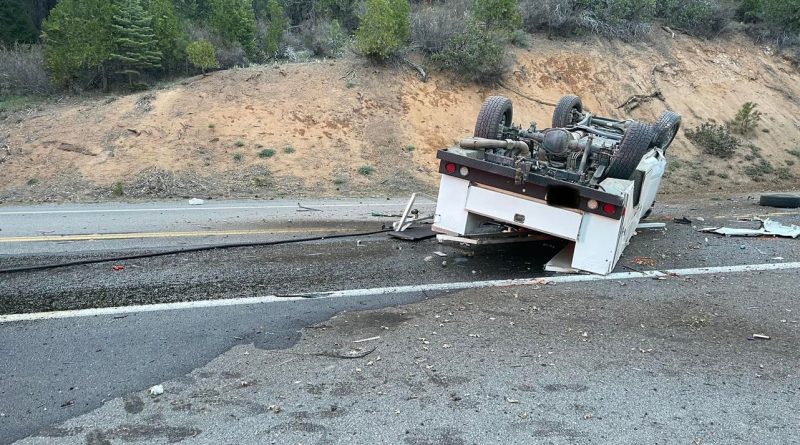 The driver of this truck suffered minor injuries when he rolled his vehicle this morning, but the resulting fuel spill closed Highway 70 for an extended period May 2. Photo courtesy of CHP
CHP Report Law & Order News
May 2, 2022 Editor

Both lanes of Highway 70 were blocked for an extended period of time this morning near Spring Garden east of Quincy while crews cleaned up fuel that spilled across the roadway following a single vehicle accident.

According to the California Highway Patrol, Nicholas Gibbons, 35, of Shingle Springs, was driving a 2017 Ford utility bed pickup westbound on Highway 70 in Spring Garden at 5:45 a.m. this morning, May 2. He was traveling at approximately 65 mph with the cruise control activated when, according to the CHP report, he fell asleep. The truck drifted off the asphalt, subsequently rolled over, and came to rest blocking the eastbound lane and a portion of the westbound lane.

As a result of the rollover, an auxiliary fuel tank in the rear of the truck leaked approximately 40 gallons of fuel on the asphalt, and a lesser amount on the shoulder of the roadway.

According to the report, Gibbons was properly restrained and sustained minor injuries. The collision remains under investigation.