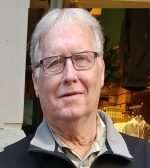 Ronald Lloyd Roath passed away on February 2, 2021 at the age of 74 in Placerville, CA. By his side were his son Blake, brother Fred and sister-in- law Debra.

Ron was born in Broken Bow, Oklahoma on July 10, 1946 to Lloyd and Eunice Roath. Ron spent most of his childhood years in Chico, CA. The family moved to Greenville in 1963 when Lloyd found work in one of the local mills. Ron and his three brothers loved the outdoor life of the Northern Sierras. They all became avid fishermen, hunters and campers.

Ron joined the Navy after graduating high school. He was a Vietnam veteran, serving in the US Navy on the Destroyer, USS Furse (DD882). In 1967 Ron married Judy Blackford. Two sons were born from that union, Steve and Blake. They returned to Greenville after Ron’s Honorable Discharge. Ron worked as a produce manager at the B&E market for 20 years. He finished out his career at Holiday Market in Chester and retired in 2015.

In retirement, Ron was often seen relaxing on the front porch of his home on Main Street. It was the best porch in town for people watching. Friends and strangers alike would stop by to chat and catch up on the latest. It wasn’t uncommon for folks to join Ron on the porch and sit for a spell. He also enjoyed golfing with family and friends.

Ron was preceded in death by his parents, Lloyd and Eunice Roath; his brother Delmer and son Steve. He leaves behind his son Blake and Blake’s fiancee Kelli of Newcastle, CA; daughter-in-law Tiffany of Blue Ridge, GA; brother Fred and wife Debra of Placerville; and brother Rick and wife Linda of Los Molinas. He is also survived by three grandchildren: Cassidy of New Orleans, LA; Payton of Blue Ridge, GA; and Gracie Jae of Rocklin, CA. He leaves behind two nephews, Danny and his wife Josie of Greenville; Scott of Placerville; and niece Jennifer of Redding plus numerous great nieces and nephews.

A celebration of Ron’s life is planned for 1 p.m. Saturday, April 10th at the Greenville Southern Baptist Church. Interment will take place in the Greenville Cemetery.

In lieu of flowers, the family asks that donations in Ron’s memory be made to the Greenville Southern Baptist Church, P.O. Box 632 Greenville, CA, 95947.