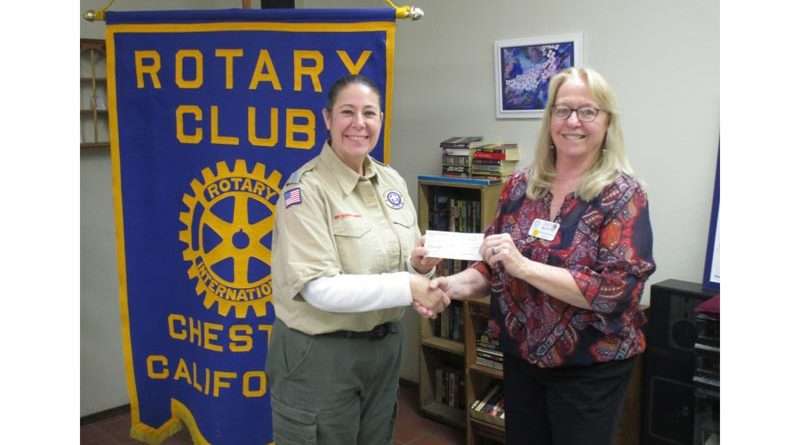 The Rotary Club of Chester validated the Boy Scout’s idea of building character in the youth of our country Thursday, Feb. 22.

In an attempt to give community members, who are not by nature “early birds,” more opportunity to enjoy the company and good work of Rotary, the local club decided to vary the club gatherings to include two dinner meetings at 6 p.m. each month.

During this, the first of those scheduled dinner meetings, the members were joined by Boy Scout, Lassen District Executive Rebekah Havard, from the Nevada Area Council.

The Council NAC is currently in the midst of its annual “Investment in Character” campaign.

This promotion is designed to raise funds to support the scouting programs in the entire council and more specifically the Lassen District, which includes Lassen, Plumas and part of Sierra County.

Rotary Club President Pro-tem Cheri McIntire presented Havard with a check for $500 as confirmation of the long-time Rotary support for scouting programs.

Besides funding resource expenses and adult training for scout leaders, this donation will have a great impact on reducing direct participation costs that would otherwise be borne by the scouts themselves.

A perfect example is the cost of a scout attending Camp Fleischmann just up the Juniper Lake road from Chester.

Fleischmann is the official summer camp for the NAC and at $365 for an entire week of camping, food and programs, it is one of the more reasonably priced camps in California and Oregon.

The two phases of “ Investing in Character” include a request for scout parents to donate, as they can afford, a little extra to benefit their scouts and help some of their friends that may be not have that additional money right now.

The second part is the community support aspect.

Civic and service organizations, clubs and businesses interested in the future of our young people are invited to invest in their future and the traditional values espoused by the Scout Law: “A scout is Trustworthy, Loyal, Helpful, Friendly, Courteous, Kind, Obedient, Cheerful, Thrifty, Brave, Clean and Reverent.

To anyone that believes in scouting experience, these are not just words, they are a guideline for scouts and scouters to use in the process of trying to build better personal character.

To that end, members of Rotary join with the Boy Scouts of America in the goal of growing better citizens by teaching the virtues of personal character to our leaders of tomorrow.