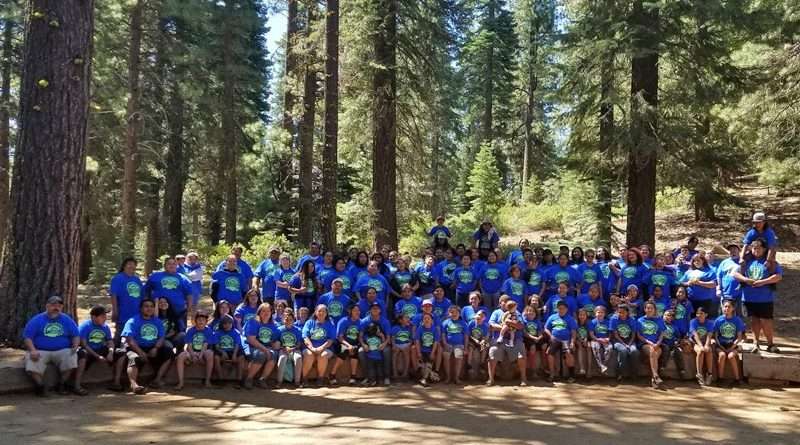 You notice the changes when you walk in the door. Roundhouse Council’s indoor space is centered on its youth. The space is large and welcoming. A student puts his backpack on the new line of pegs inside the door, gives executive director Mary Joseph a big hug, then settles down to a snack and some tutoring.

The place is hopping. At lunch time, most of the Greenville High School football team is in the front room eating pizza. Seven team members this year are Natives. It’s cold and flu season. Coach Harvey Merino II makes sure they all drink an Indian tea and an elderberry syrup he’s made to keep the team healthy. The boys clean up a bit and head back to school. Merino prepares to counsel a younger student one-on-one.

This year there are 20 kids enrolled in the after-school program at Roundhouse Council and the focus has noticeably switched from strictly a place to get homework done to a safe space where the focus is the well-being of the whole child. Joseph is mastering making the connections between a child’s spiritual, physical, cultural and emotional well-being with that of homework and academic education. It’s a concept that’s working.

Joseph’s approach aligns with what educational centers across the nation are pushing toward — instead of segmenting and compartmentalizing each aspect of a child’s life popular in the 20th century, recognizing that student success is based largely on student well-being.

That’s not to say there’s not a push for academics. The after-school program provides tutoring for K-12 students in Indian Valley — but there’s now a focus on educating the mind, body, and soul as well as homework.

But on Mondays the focus is now on learning Maidu — for all who wish to do so — not just the kids. There is no longer a fluent speaker of Maidu living, but all share what they do know. They use books, recordings and archives to piece together the study of the language and bring back what they can.

Every other Thursday there’s a wellness session for the youth where the difficult topics can be talked about: suicide prevention, body shaming, drugs and alcohol. There’s a talking circle where the youth can take turns talking about the issues that mean something to them — situations they might be having a difficult time grappling with. This focus on mental health makes long strides toward a community once ravaged by suicide. There is now a space to talk about these issues.

Joseph and Merino both try to keep the focus at Roundhouse Council on the traditional, believing that that emphasis is key to overcoming hardships that can often face the community.

Over the past few years, they’ve started taking the students enrolled in the program out of the valley to expose them to other tribes and other experiences. They’ve emphasized learning traditional crafts (there’s a beading night), hand games tournaments and dances.

At Chico’s Little Big Time this summer, one of the Roundhouse handgame teams won $1,000. It’s important to Joseph that they connect with other tribes and see the similarities and differences of tribes around the state and what they’re going through.

There’s also focus on physical that connects the dots to achievement. Want better physical mobility and activity? Find ways to make it happen for everyone. All the enrolled Roundhouse students received free, good quality athletic shoes this year to help boost physical activity. As part of their “Fitness in Indian Country” program, the kids are also encouraged to do daily exercise and track it along with tracking their daily water intake.

The program is not without its detractors. There are some who define education as strictly homework completion and are bothered by the 21st century approach to whole child wellness. The fieldtrips are open only to students enrolled in the program who are actively participating in the program. That can be a tough reality for kids who want to do the fun trips without putting the daily time in on the programs. Students — no matter whose child — are reprimanded the same and called out for bad behavior — that sometimes can make for some hard feelings, too.

Some things remain the same. The tutors go into the K-12 programs across the street and work with Native students in both Greenville High School and Indian Valley Elementary School. Roundhouse Council is actively seeking a new math tutor for its Monday through Thursday after-school tutoring. The elders’ luncheon still takes place on Fridays. Family night is now the second and third Thursdays of the month.

Joseph is hoping to do a Cultural Sharing Day soon. She wants the kids to learn what’s appropriate and what’s not — why wearing an Indian princess costume for Halloween might be disrespectful, for example, or a Day of the Dead Halloween costume without having ancestral ties to the Mexican observance. She wants to see more cultural sharing.

What she wants to see most though are happy well-adjusted kids. “This should be a place where they are not yelled at. Where they can get a meal and be safe,” said Joseph. “If a child is not mentally, spiritually and physically well, they aren’t going to do well.” The nation’s educational experts would tend to agree.