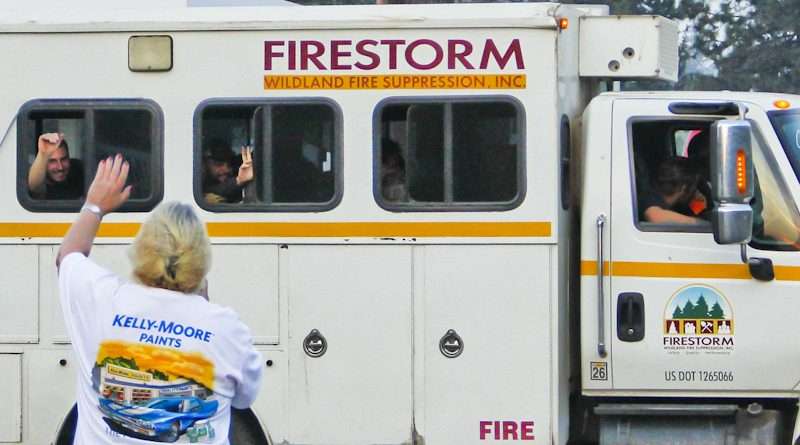 In the last light of day on Saturday, Sept. 26, dozens of local families carried balloons, flags and homemade signs of thanks while they waited at strategic spots in East Quincy.

Groups of friends and neighbors stretched from La Porte Road along East Main Street to the Fairgrounds Road entrance of Fire Camp.

Chatting amiably, parents, children and grandparents stood patiently apart and made ready to cheer and shout their messages of “Thank you, firefighters and emergency responders!” It wouldn’t be long before they would see weary crews driving into town from the North Complex Fire’s La Porte region.

Thank you, thank you!

After six weeks of wrestling the now 305,000-plus-acre wildfire to a remarkable 78 percent containment as of this weekend, sunset was coming and the day crews were headed in for a welcome dinner, showers and some shuteye.

But first, the community wanted to share a huge gesture of appreciation for these heroes of the Lost Sierra, the emergency responders and law enforcement, contractors and firefighters from near and far, all coming off the lines after another long, exhausting battle on this California wildfire.

“I didn’t get a chance to be part of the big parade for the fire crews on Thursday downtown,” said one resident who waved his American flag aloft while truck after truck of crew members greeted the vocal, enthusiastic clusters of socially distanced fans. “I’m a retired emergency responder myself and these teams are incredible, so I made sure I wouldn’t miss this tonight!”

Signs, gratitude and much more

Since Aug. 17 brought lightning strikes that ignited the Claremont and Bear Fires, which merged into the North Complex now stretching from Plumas County into Butte and Yuba counties, abundant hand-painted thank-you signs have filled neighborhood streets and business storefronts.

And people have wanted to do more for weeks. In fact, local businesses have offered a range of special services for emergency personnel assisting us during this disaster. Many residents have also contributed money to help the efforts, including funding meals at nearby eateries, for example.

Thursday’s tribute packed the sidewalks in Quincy to honor the crews coming down from Bucks Lake. Beaming faces, friendly waves and shouts of love rained upon the fire crews as they drove through town.

Saturday night’s East Quincy gathering was the second large and public outpouring of local gratitude this week — a celebration that was equally heartfelt.

Emotions rose as Highway 70 filled with heavy equipment, fire trucks, water tankers and other operators returning along East Main Street. The row of vehicles and workers swelled into a procession of flashing red and white lights and honking horns.

Smudged faces grinned through open windows and dusty hands waved back at the local crowds. Children hollered and adults shouted, “Thank you, thank you so much! We love you!”

Evening was falling fast now, but no one on the sidewalks was in a hurry to leave. They held their signs high, the messages reflected in headlights and blinkers. Every face shone with a smile, smoky or clean, and one by one, the emergency vehicles turned onto Fairgrounds Road, taking the exhausted crews through a hero’s welcome.

At last, night had arrived. The moon was high over Claremont Ridge and things began to quiet down. Out of the dusk, one U.S. Forest Service firefighter with salt-and-pepper hair walked back up the sidewalk, away from camp, to the group rounding up their little ones at the corner of Highway 70.

He came up gently, probably more tired than he wanted to allow, and said, “I’ve been doing this work for over 27 years and I just want you all to know how much we appreciate this. Seeing all of you out here, waiting for us and telling us thank you, it means the world to us.”

Murmurs of “Yes sir, thank you,” were heard throughout the group.

The firefighter turned back toward his supper with a wave and the companionable crowd, happy in their hearts, headed home to another night of safety. 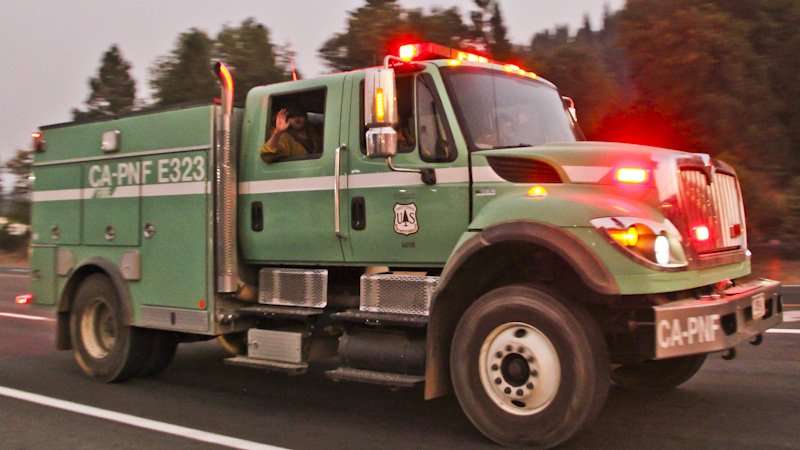