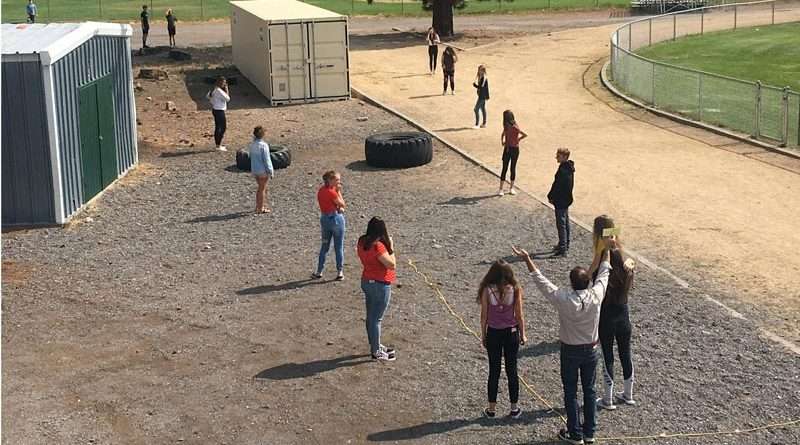 Chester Jr./Sr. High math teacher Shawn Mahaffey offers an experiential math lesson to his students. In his words, “I gave each student a number from -9 to 9 and they stood on a number line. Then I showed them a mathematical equation (the yellow paper) and they stepped out the resulting number. We create a parabola. We call it an algebra walk.” Photo submitted
News
September 25, 2019October 2, 2019 Linda Satchwell, Staff Writer

The Plumas Unified School District Governing Board meeting Sept. 11 saw some lively dialogue from a largely cohesive board interested in improving student success in both the short and the long term.

The PUSD board revisited a discussion about adding a third year math requirement at the high schools, which was also a topic of conversation at the February and May meetings.

Board President Leslie Edlund voiced her concern that math course sequencing at the high schools didn’t seem to have a clear or unified direction. She was particularly concerned that different school sites had different offerings. “Why is one school offering trig. and pre-calculus and another only up to Integrated 3?” asked Edlund.

“Portola has the whole gamut, which is interesting,” Edlund noted. “I don’t know why Quincy doesn’t have any pre-calculus.”

Chester Jr./Sr. High School math teacher Shawn Mahaffey, who also spoke to the board at the February and May meetings, detailed the complexity of the issue. “I have groups of kids going through school,” he explained. “This year, I don’t have students prepared to move into it [pre-calculus].”

It’s also a “matriculation problem,” Mahaffey said. At Chester High, he noted, for students to take a particular math class would require them to take their history class online, for example.

Mahaffey also pointed out that “overall school size makes a difference.” In a larger school, it’s possible to offer more sections. Further, while Integrated 3 allows students to take calculus as seniors, “It’s quite a challenge” to equip them to succeed in calculus, as it’s “impossible” to finish the Integrated 3 book within one school year, he said.

When asked for comment, she explained, “As we consider how to best prepare our students for college and career, we are exploring adding a third year requirement. … In order to apply for a California State University or University of California, students need to complete three years of math. Whether or not a student is going to attend a CSU or UC, additional math courses can better prepare students for their next steps after graduation.”

Mahaffey also noted that Portola Jr./Sr. High has a “higher level, different thinking about it [the emphasis on math].” Twelve students at Portola High are in AP Calculus, he added.

Portola Jr./Sr. High principal Sara Sheridan later explained her school’s approach. “Math drives the master schedule at PJSHS. We recognize that our students have varying ability levels, and so we want to provide adequate support and as many opportunities as possible to ensure their success.

“One important aspect of our sequencing is that we carefully analyze CAASPP scores and place our higher performing seventh-graders into high school level math classes in eighth grade. In addition, we offer tutorial sessions five days a week to offer concentrated math support,” said Sheridan.

Mahaffey also observed that “the place where things fall apart” is in fourth and fifth grades. It’s a national problem, he said, and social and economic changes in Plumas County exacerbate that problem.

In the 2000s, he said, the push was to make sure every student took Algebra 1. But, this requirement kept getting postponed because students couldn’t pass it. “They kept postponing it until they finally threw it out,” said Mahaffey.

With the new potential requirement of a third year of high school math, “suddenly math teachers are under a lot of pressure,” he said. “When you want it all, you’re asking a lot of these poor teachers.”

Board Clerk Traci Holt said, “I want to see what these section adds look like in terms of student achievement.”

Finally, board member Dwight Pierson took the philosophical approach, noting that the board’s “guiding principal” should be to ask, “When our kids leave here, do they have the tools they need? … This is the kind of discussion that’s going to make a better school district.”

PUSD signed on to the eSports phenomenon beginning with the 2018-19 school year, which allows students to compete in online, competitive video gaming.

They’ll be competing again this year in the Northern California eSports League.

Schools want to draw in students who aren’t interested in traditional sports, and the hope is that teachers can make the connection between students’ eSports skills and STEM (science, Technology, engineering, math) subject mastery.

The PUSD high school teams will have six players each, who will be selected after tryouts, much as they would on a traditional sports team. Each team will be coached by a staff member.

Last year, eSports coaches were paid from grant-funded stipends. Those funds aren’t available this year, which spawned a lively discussion about equity in extra duty pay.

“I’m frustrated with one coach not getting paid, and another getting paid,” said Pierson. “Where’s the fairness in all of this. It’s a lot of work.”

Holt concurred, “It warrants us taking a look at it and re-vamping. We have to level the playing field and make it fair and equitable.”

Superintendent Terry Oestreich said that the district has “made a commitment to eSports,” and that the students were already enrolled for this year.

“Principals have shared this extra-curricular activity has a powerful impact on our students and we are excited to offer this opportunity at each of our four high schools,” said Oestreich when asked for comment.She promised the board, however, that she would look into the issue. “We’ll get this figured out,” she said.

President of the Plumas County Teachers Association Suzanne Stirling took things a step further, noting that she had stopped hosting S (Service) Club after nine years, because she “got tired of doing it for free on my lunch. I would argue these [clubs] are just as important as sports,” she said and asked the board to look into this.

Pierson responded by addressing the rest of the board, “Can we make it a priority?”

Oestreich said later, “We will have an update for the board next month regarding extra pay for coaches, clubs and other electives.”

In the waning minutes of the board meeting, members began to look at Measure B spending requests in a spreadsheet that detailed re-prioritization of Measure B projects.

Board members had numerous line item questions, and they decided to hold a special meeting Sept. 25 at the District Office at 5:30 p.m. to make these detailed decisions.