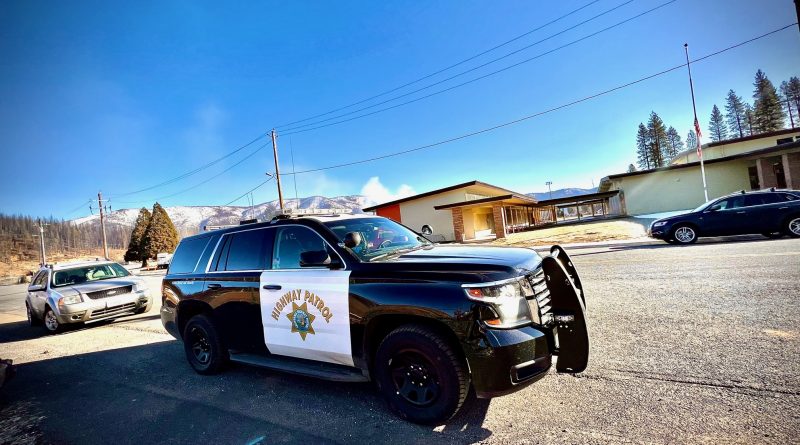 A California Highway Patrol is parked in front of Greenville schools this morning, Jan. 25, as officers respond to a threat to the high school campus. The all-clear sign has been given and students are back on campus following a two-hour delayed start. Photo by Andrea Singer
News
January 25, 2023January 25, 2023 Editor

UPDATE: During an interview this afternoon, Undersheriff Chad Hermann said that investigators contacted the school personnel and students and found no documented threats. A juvenile was questioned, but not arrested as a result of the interviews. Hermann said it was determined that there was no threat.

Greenville schools were put on a two-hour delayed start this morning, Jan. 25,  following a safety threat. Law enforcement — including Plumas County Sheriff’s deputies and the California Highway Patrol responded. According to a reporter on scene, officers gave the all-clear signal and students were allowed back on campus before 10 a.m. Many had been waiting on a school bus offsite.

Plumas Unified School District Superintendent Bill Roderick, who was on site, confirmed to Plumas News that the students are back in school. Roderick said the threat had been made to the high school.

Plumas County Sheriff Todd Johns said that more information will be released soon, but the individual who made the threat has been detained.

According to Plumas County District 2 Supervisor Kevin Goss, who was made aware of the situation, he said a threat was made last night necessitating extra caution this morning.

More information will be shared as it becomes available.